A factory worker pays to get a false memory implanted only to discover that he's forgotten he is the real thing.
Kenneth R. Morefield|August 3, 2012
Our Rating

It is ironic that Douglas Quaid spends so much time in Total Recall trying to figure out who he is, because the film itself does not know what it wants him to be. Ostensibly a science-fiction adaptation inspired by—at least they had the decency not to say "based on"—Philip K. Dick's short story "We Can Remember It for You Wholesale," Total Recall actually spends more time alluding to its 1990 namesake directed by Paul Verhoeven and starring Arnold Schwarzenegger. 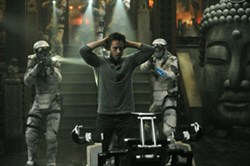 Both films center around a worker who decides to use the services of a mysterious agency named Rekall, which purports to be able to implant memories of experiences you cannot (or cannot afford to) have. Quaid purchases a "package" in which he is a spy/secret agent, but the imprinting of the fantasy is interrupted when it is discovered that Quaid actually is a spy who has had his memory erased and whose current existence is itself a fabrication. Or is it? Perhaps everything that follows the trip to Rekall could be the fantasy he has just purchased rather than the interruption of that transaction. Is Quaid a factory worker fantasizing about being caught up in the war on terror the government is waging against the mysterious "Matthias" and his followers, or has he been brainwashed by the government into forgetting what he has already done? While Dick's short story is a dark, cautionary tale about a man who has been wiped and imprinted so many times he can no longer decipher what is real and what is made up, the film versions are mostly interested in playing an "is he dreaming or isn't he?" shell game with the audience.

That's a shame, because the "keep the audience guessing" game is much less interesting than the questions raised intelligently by the subjectivity and ambiguity of the source material. Truthfully, though, director Len Wiseman's version doesn't even keep the audience guessing for very long. There are simply too many scenes cut away from Quaid's point of reference for it to all just be in his head. We can understand that he may not be sure, but as the film never adopts Quaid's perspective exclusively, we ourselves are never in doubt. Whether the film wishes us to be in suspense but lacks the comprehension or the skill to think through how to accomplish that ambiguity or whether it simply doesn't understand how his uncertainty has less dramatic effect than our own is an open question. In one centerpiece scene lifted from the 1990 film, a person pretends to be an imprint trying to get Quaid to snap out of what he is told is his own psychotic break by shooting an accomplice. "Will he or won't he?" carries a lot less dramatic conflict when the question "should he?" is no longer in play. 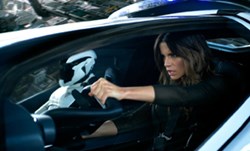 One famous study purported that an average National Football League game, which lasts about three and a half hours, has eight minutes of actual action spliced in between huge chunks of down time. Total Recall is almost the opposite. It feels as though there is eight minutes of story spliced in between endless repeated chases and stunts. The larger social and political setting of the film is set up in the first five minutes, and Quaid spends most of the first hour of the film looking for pieces to a puzzle that everyone else, including the audience, has already put together. The best action/mystery hybrids are the ones in which the hero is a step or two ahead of the audience, convincing us in their ingenuity that they are smart, clever, or well trained. That is not the case here. Quaid makes many miraculous escapes that require physical grace and precision (and more than a little special effects help), but the sequence of set pieces are stitched together not by a strategy he develops but by a series of external messages or clues that are directing him to his next steps.

While it is hard to think of a film less interested in exploring any of the ideas that allegedly inspired it, it is easy enough to rattle off the films that did which are referenced here. The dystopian, fascist British government invokes V for Vendetta, while the synthetic army being used to invade is equal parts Attack of the Clones and I, Robot. (By which I mean, of course, the generic action movie of that title, not the thoughtful science fiction novel that "inspired" it.) The squalid blend of Asian neon and Western urban settings that is the Colony invokes Blade Runner, while the futuristic cars feel like they were found on the lot of Minority Report and shined up for duty here. The environmental disaster that apparently decimated most of the earth in the film's prologue sounded a lot like The Road and looked a lot like Mad Max. And, of course, just about any scene with Kate Beckinsale could be inserted into any of the two Underworld movies that Wiseman also directed without looking out of place. 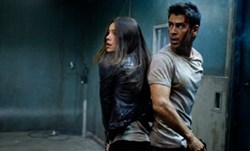 Melina (Jessica Biel) and Doug on the run

The true parent of the film, though, is neither Philip K. Dick's story nor Paul Verhoeven's adaptation of it. It is Doug Liman's The Bourne Identity which provided the template not just for the endlessly overly choreographed fight scenes but also for the metaphor of amnesia as a prompt to moral re-evaluation of and revulsion at past choices. Given that the Bourne franchise has another installment coming out next week, it seems inevitable that some ticket holders for either film will wander into the wrong theater and neither notice nor care. As an August bridge between the late summer blockbusters and the early fall awards contenders, Total Recall makes little demands on the viewer's attention or concentration while blowing lots of stuff up and reassuring us that no matter how extensively we've been brainwashed, the difference between actual terrorists and revolutionary freedom fighters who have just had that label hung on them by fascist, bloodthirsty government officials will be apparent to anyone who is at heart a good guy.

Total Recall is rated PG-13 for intense sequences of sci-fi violence and action, some sexual content, brief nudity, and language. A prostitute who propositions Quaid appears topless and is shown to have three breasts. She also engages in crude sexual banter with him. Beckinsale's character is shown wearing panties as sleeping clothes in one scene. The action violence while constant is less graphic than in some police procedurals or even television programs. Since most of the police officers are "synthetics," much of the action violence is more like destruction of property rather than of the human body. There are some intense hand to hand combat fights, including several involving fisticuffs between male and female characters. A scene in which Quaid stabs his own hand with a shard of glass in order to remove an implanted electronic telephone is not for the squeamish. Although the film keeps the use of the "f" word to a minimum (I counted only one usage), Quaid does repeatedly use both the name of God and Jesus as generic swear words.