An amazing-but-true story about a loving family's fight for survival after the 2004 tsunami.
Mack Hayden|December 21, 2012
Our Rating

Some movies pride themselves on being reminders—especially during the holiday season. It's a Wonderful Life, A Christmas Carol, and even Home Alone serve as refresh buttons, clearing out our brains and rejuvenating our awareness about how the importance of family, life, and love—and usually doing so softly, gently, and with a mother's care. The Impossible may take place around Christmastime but it is no Christmas movie in any traditional sense. And though it causes us to remember the themes above, it does so not with a caress but with furious intensity. 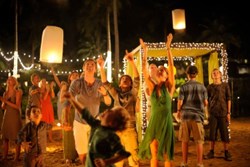 What started as a joyful family vacation quickly turned terrifying

In 2004, Henry (Ewan McGregor) and Maria (Naomi Watts) take their three young boys to Thailand for Christmas. Lucas (Tom Holland) is just on the edge of puberty, so he's starting to get an idea of his parents' flawed humanity, while Thomas (Samuel Joslin) and Simon (Oaklee Pendergast) are younger, and more innocent. They arrive at a resort and partake in some small enjoyments until disaster strikes the day after Christmas. A tsunami slams into the Thailand coastline and separates the family, ultimately killing over five thousand people and leaving more than a thousand orphans in one fell swoop. Lucas ends up with his mom, the other two boys with their father. The rest of the film consists of the family trying to find each other again.

The Impossible is based on a true story in the lives of a real-life Spanish family. Director J.A. Bayona goes to great lengths to depict the harsh reality of what happened on December 26, 2004 as well as its aftermath. It's the catastrophe itself that is most impressive in terms of filming here. The sequences of water rushing and particularly of Watts being dragged undersea and above again, all the while beaten by debris, are among the movie's most visually stunning.

At times, the score can modulate into a Hitchcock-esque emphasis on anxiety-inducing strings, making you question whether you're watching a family drama or a horror movie. In many ways, it's both. Never does the film venture into elements of sensationalized terror, but Bayona seeks to highlight how horrifying this situation would be for a separated family. Scenes of grotesque injury are not played for shock but for the viewer to be faced with the painful realities of the aftermath.

Perhaps most inspiring is how all characters try to manage their own injuries and panic in order to help others. In the hospital where his mother is staying, Lucas rushes around to assist other families reunite, and a Frenchman lets Henry use his dying cellphone to place a call to his family. The Impossible has no truck with nihilistic, self-centered views of human nature. There is enough decency or perhaps even God's image in the common man to turn a disaster of this level into an opportunity for love and service in action. Fight and flight responses are nowhere to be found here. Everyone's in it together. 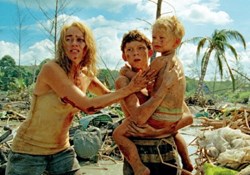 Still, the film lacks on a couple levels. While all the actors in the focal family turn in stellar performances, the supporting cast is comprised of the semi-talented. No one is painfully awful but the occasional poorly delivered line or wooden expression can undermine all the work Bayona or the leads have put into creating dramatic tension. This wouldn't be such an issue if the script walked a less precarious line. Some lines are saved from complete cheesiness because of McGregor's or Watts' prowess, but when put into the mouths of less proficient actors, their weaknesses show.

The camera spends a great amount of time looking down upon the disaster and ensuing restoration from above. Occasionally, it drifts upward to the sky from the characters' perspective as well. It makes one wonder how the eyes of God can still be looking at man when the eyes of man are blind to his purposes. Films like these open up theological debates and personal injuries all over again. Questions of "Why, Lord?" and "Where were you?" flit through one's mind. But one thing is certain: The actions of the characters in this movie have a smack of divine spark to them. The compassion present here is sacrificial and authentic. 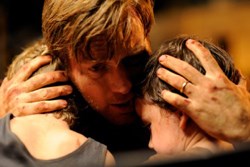 Oaklee Pendergast as Simon, Ewan McGregor as Henry, and Samuel Joslin as Thomas

The film begins and ends with a plane flying over a quiet, still, and vast—yet unassuming—ocean. It's a poignant visual metaphor given what will soon transpire. The tranquil, the idyll can turn into the chaotic in the course of a few minutes. This chaos is best seen against a backdrop of familial affection. Love becomes most apparent not in the quiet ocean or the luxurious resort, but in the wreckage left by water gone wild. The tsunami destroys, undeniably, but it's a wonder to see crowds of people making their way through rubble and carnage to rebuild and search not just for themselves but for their fellow human beings as well. In disaster, these people did not turn to animalism but to a deeper sense of humanity, not to selfishness but altruism. Family became a definition able to include all those affected and afflicted. And watching that can bring tears to your eyes.

The Impossible is rated PG-13 for intense realistic disaster sequences, including disturbing injury images and brief nudity. Brief female nudity is seen but never sexually. The mother's injuries and ensuing illness are disturbing, while other patients in the hospital also suffer terrible injuries and pain. The whole story is told under the pretense of extensive anxiety and post-traumatic stress.

1 of 3
What started as a joyful family vacation quickly turned terrifyingNaomi Watts as Maria, Tom Holland as LucasOaklee Pendergast as Simon, Ewan McGregor as Henry, and Samuel Joslin as Thomas