The new reboot is funnier and more fleshed-out than its predecessor—and at its core is an age-old story.
Alissa Wilkinson|July 2, 2012
Our Rating

Let's be honest: rebooting a movie franchise is risky business, and the risk is compounded if it's a popular and well-loved franchise. So director Marc Webb had his work cut out for him when he took on The Amazing Spider-Man, which starts Peter Parker's story from the beginning again—and this merely a decade after the first film starring Tobey Maguire and Kirsten Dunst. Thankfully, Webb's Peter Parker/Spider-Man is played by Andrew Garfield (whom you last saw in The Social Network), who is fully up to the task. 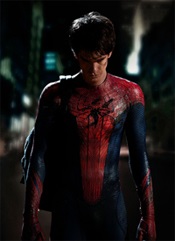 If you're a fan of the Spider-Man comic books, intimately acquainted with the series and its universe, you'll instantly recognize some of the changes and choices that the writers of this film chose to make. But if you're like most people, when you see The Amazing Spider-Man, you probably just want a great summer flick, with good character and plot development, a bit of danger, a bit of romance, a bit of depth, and (because it's summer) some eye-popping shots that make you feel like you're swinging through the streets of Manhattan.

Well, friend: you're in luck.

Peter Parker has lived his life surrounded by mystery. One night, when he was a child, his parents abruptly packed up and rushed him to his Uncle Ben and Aunt May's house, after which he never saw his parents again. Now he's in high school, and he is starting to get curious about what happened to his parents. 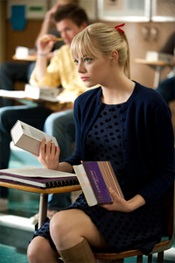 And he's hopelessly in love with Gwen Stacy (played by Garfield's real-life girlfriend, Emma Stone), the brainy blonde who sits in front of him in class. Parker is also incredibly brainy, but he's a bit of an outcast and mostly wanders around with his camera, avoiding hotshot jock-bully Flash. Yet when he catches wind of a lead that might shed light on his parents' disappearance, he sneaks into Oscorp, a secretive research-and-development company where Gwen just happens to be the head intern. And then he gets bit by … well, you remember this part.

On the surface, this film's plot may seem to be too similar to the 2002 version, sans the famous kiss and a few characters (though savvy viewers will pick up on all the hints that this one's going to take some dark, difficult turns in its sequels that the earlier franchise avoided). But set that concern aside for a moment: this movie is better than its predecessor. Gwen's a better heroine for our time than Mary-Jane: she is sweet and funny and feminine, but she isn't sitting around waiting for Spidey to rescue her. And Garfield's Parker is less of a one-dimensional nerd, more of a real teenager, who stomps out of the house and slams the door when he gets mad. His Spider-Man (complete with wisecracks) is simply an extension of this tough transition from teenager, where his biggest problem is the bully Flash, to adult, where his biggest problem is a giant lizard that's trying to destroy New York City through biochemical weaponry. 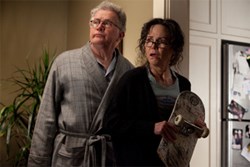 Martin Sheen as Uncle Ben, Sally Field as Aunt May

That's what the story of Spider-Man has always been about: growing up—physically, mentally, and emotionally—and stumbling onto your calling, then realizing the limits it places on your freedom to choose the path your life will take. As Parker-turned-Spider-Man climbs walls, chases villains, and swings around buildings, he realizes that he has great power (with which, inevitably, comes great responsibility), but that he's not invincible. He comes home with a lot of scrapes and bruises, and he causes a lot of hurt to the people he loves.

That coming-of-age narrative is played to its full effect here, and in a way that more viewers can identify with. And that's all done without sacrificing the sort of thrill-ride shots we want from a tale about a human spider (see this in IMAX 3D if you can!), and with hinting darkly at the turns the sequels will take.

If you're like me, you'll have trouble not grinning through the whole film. And that is what makes for a great summer movie.

The Amazing Spider-Man is rated PG-13 for sequences of action and violence. The action sequences are pretty much what you'd expect: mostly cartoonish violence. Two characters die (but not graphically) on screen. If you're prone to motion sickness, you might want to opt out of IMAX.