Morgan Freeman as a crotchety writer who inspires a family and is inspired in return.
Russ Breimeier|July 6, 2012
Our Rating

Rob Reiner's name used to be associated with acclaimed blockbusters—classics like When Harry Met Sally, A Few Good Men, Stand by Me, Misery, This Is Spinal Tap, and of course, The Princess Bride. But Reiner's more recent output as a director have veered toward more schmaltzy fare, taking toll on a once great career. Even if (like me) you enjoyed 2010's Flipped and 2007's The Bucket List, even those don't measure up to Reiner's heyday.

Things aren't getting any better. Reiner's The Magic of Belle Isle ranks alongside the average direct-to-video Christian film or a Hallmark channel movie. Though a well-intended effort, it's hard to believe Reiner's name is attached to something this contrived and clumsy in scripting and pacing. Fortunately, Belle Isle has an ace in the hole: Morgan Freeman. The esteemed actor with the soft, commanding voice could probably get away with reading the phonebook on film and still offer some entertainment value.

Freeman is virtually a one-man-show as Monte Wildhorn, a once great writer of Westerns coping with alcoholism and confinement to a wheelchair. Nephew Henry (Saturday Night Live's Kenan Thompson) recognizes the need to get his uncle out of his crotchety routine and inspire him to write again. He enlists Monte as house-sitter and dog-sitter for the summer in the small lakeside town of Belle Isle (not to be confused with the island off the coast of France).

Upon Monte's arrival, the film wastes no time introducing us to the O'Neil family, his next-door neighbors for the summer. Charlotte (Virginia Madsen) is a mother dealing with the pain of a new divorce, and has relocated her three girls from New York City to make a fresh start. Teenager Willow struggles with being away from her friends ... 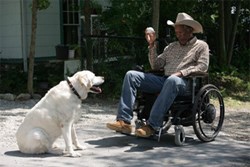