It's been over a decade since P.O.D. was the hottest hard rock band on the planet. Their triple-platinum album, Satellite, had released on Sept. 11, 2001, a day when the world desperately needed some good news. The band became a mainstay on MTV and rock radio, and their songs made the soundtracks of blockbuster movies and TV shows.

Things have simmered down for the band since; Testify (2006) sold about 500,000 copies, and When Angels & Serpents Dance (2008) sold about 200,000. Around that time, lead singer Sonny Sandoval told his bandmates that he desperately needed a break, to spend time with family and to revitalize his walk with God. Save for a few scattered shows, P.O.D. has mostly been lying low for the last four years.

But now, 20 years after the band formed in San Diego, P.O.D. comes back with a new record deal (with Razor & Tie) and a rock-your-face-off new album, Murdered Love, releasing today. We recently caught up with Sandoval, 38, to talk about what he learned during the band's hiatus, about the new album, and about one song on the new record that includes a particularly naughty word—and how they thought Christians might respond to it. (Note: the song is not included on the album version released to Christian retail.)

The band is 20 years old this year. And you're getting to be an old man!

I am, man! (Laughing.) Problem is I feel young. Until I bust up my back jumping off the stage. But it's been a great experience.

What's been the best part?

Seeing the impact that our music has. It's always been my heart that God would save people through this crazy music somehow, someway, his way. All we know how to do is write music and love God. When some kid comes up after a show and says he was contemplating suicide or ... 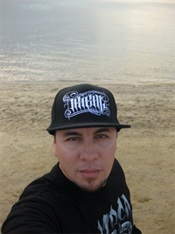