As a teen, Rhett Walker did drugs and got his girlfriend pregnant. But now he really 'gets' grace.
Joel Oliphint|July 17, 2012

You've likely heard plenty of Christian music made by a pastor's kid who eventually became a worship leader. That's the 10-cent description of Rhett Walker, whose debut rock record, Come to the River, released last week.

But Walker's journey from churchgoing son of a pastor to lead singer of the Rhett Walker Band was a rocky, circuitous one, involving drugs and a girlfriend's unexpected pregnancy during his rebellious teen years. Walker's fork-in-the-road moment came when he was just 17, but, spurred on by a challenge from his father, he went in a direction most 17-year-olds wouldn't.

Walker drew directly from those experiences for Come to the River, helped by co-writers such as Jason Ingram, David Leonard of All Sons & Daughters, and Steven Delopoulos of Burlap to Cashmere. When we spoke, Walker didn't shy away from his troubled past as he talked about grace, boldness, and how bands like Soundgarden and .38 Special have inspired him.

Tell me about what you were like as a teenager.

My dad's a pastor, and we'd just moved to South Carolina, and it was like starting over. I was young and dumb. You know how it is when you're 16. You're just getting your license and things are starting to go smoothly. Then I just went crazy. I started messing in stuff I didn't need to. I got expelled from my high school. I had to go to this Christian school down the road. All along my dad is a pastor at this new church, and people are like, "How can you lead a church if you can't even raise your family?"

So I get to this new school and, same thing: living life like I wanted to, messing with drugs. Next thing you know, my girlfriend's pregnant. That was the moment where it was like, "What have I done? This is forever." I didn't know what to do. I told ... 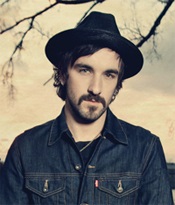