Despite having the cast and the ingredients of a great comedy, it ultimately falls flat.
David Roark|July 27, 2012
Our Rating

In an early scene from The Watch, a solemn Ben Stiller drives away in his car with a Spanish version of Simon and Garfunkel's "The Sound of Silence" playing in the background. This hilarious moment, a nod to Mike Nichols' classic The Graduate, is a symbol of hope for the hour and a half to follow, an indication that we might be in for a smart and memorable film. Unfortunately, the scene turns out to be nothing more than a fluke, a misleading sign for not delight but discontent. Despite all the ingredients of a great comedy, The Watch ultimately falls flat, proving pretty, well, meh.

On paper, The Watch seems like a shoo-in for success. It brings together some of the industry's funniest actors—Ben Stiller, Vince Vaughn, Jonah Hill, and British comedian Richard Ayoade (The IT Crowd)—with director Akiva Schaffer in a ridiculous plot: Four men from a small Ohio town start a neighborhood watch group to escape their monotonous lives and suddenly find themselves defending Earth from an alien invasion. But Schaffer doesn't execute like he did in his underrated first feature Hot Rod, this time relying too heavily on typecast performances and vulgarity (oh the liberties of an R rating) rather than eccentric characters and an interesting story with memorable scenes.

Only a handful of scenes sticks with you—a bad indicator for any film. From a motorcycle jump at the local swimming pool to several fights between father and son to an endless list of one-liners, this certainly wasn't the case for Schaffer's Hot Rod. That film, a cult classic in many circles, had enough unforgettable scenes to keep the conversation going. Not so The Watch. Given its big-named cast, it will probably earn a lot of money, but who cares if you're ... 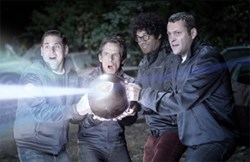