The 1920s Cristero rebellion, or the Cristiada, during the latter part of the Mexican Revolution was one of the largest insurgencies in Western history, but few Americans today have heard of it. The closest familiar point of contact is probably Graham Greene's celebrated novel The Power and the Glory, set during the continued anticlerical persecutions of the 1930s after the end of the Cristero conflict.

For Greater Glory is set a decade earlier. The story takes place during the presidency of Plutarco Elias Calles (Rubén Blades), who held office from 1924 to 1928 and continued for a half dozen years afterward to govern the nation through puppets. Calles was a fanatical opponent of Mexico's Catholic Church, which had opposed the revolutionary generals in the turmoil following the Mexican Revolution. He promoted ruthless enforcement of restrictions on the church under the 1917 Constitution, compounding them with draconian punitive measures. 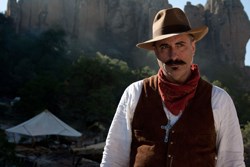 Calles's oppression was met first by peaceful resistance and then by violence, with a decentralized movement of peasant forces—derisively dubbed Cristeros or "Christers" by their opponents—enjoying some startling successes against the federales, particularly under the command of General Enrique Gorostieta Velarde (Andy Garcia), an accomplished military leader who served in the Federal Army before becoming an unlikely leader of the Cristero forces. Spearheaded by Mexican producer Pablo José Barroso, For Greater Glory is one of the most expensive and ambitious films in Mexican filmmaking history. Special effects guru Dean Wright, whose credits include the Lord of the Rings and Narnia films, makes his directorial debut, imbuing the film with an aura of Western saga. 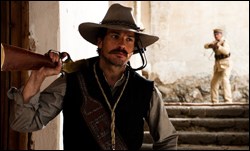 Garcia stars as Gorostieta, depicted as benignly agnostic, supportive of religious freedom, and indulgent of the pious faith of his wife Tulita (Longoria), who raises their children in the faith with his consent. The real Gorostieta was apparently more complicated: a committed anticlerical who was contemptuous of religion, he nevertheless supported limited government toleration of religion.

Though he openly sneered at the faith of his subordinates, including his clerical lieutenants, as a Cristero leader Gorostieta wore a large crucifix around his neck—and if the depiction of Gorostieta shouting the famous Cristero slogan "¡Viva Cristo Rey!" ("Long live Christ the King!") seems paradoxical, it's probably accurate. Less accurate, probably, is Gorostieta's edifying character arc toward faith.

That's typical of the movie's sanitized, faith-friendly approach to its subject matter. The real Father Vega was a vigorously irreligious man whose carnal and murderous ways would make Greene's frail "whisky priest" look like Francis of Assisi. The film's Vega is more like the historical Father Pedroza, an earnest priest despite his military involvement. An infamous atrocity from Vega's career involving a massacre of civilians is depicted in the film as an accident. 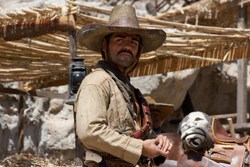 Despite its schematic simplicity, For Greater Glory effectively taps into timely themes of religious freedom and intrusive government policy, as well as the mixed outcomes of U.S. vested interests in complex foreign affairs. The film shows U.S. ambassador Dwight Morrow (Greenwood) working to negotiate a peace deal with the Calles government partly to ease the flow of oil to the United States—a flawed deal that ultimately goes through, essentially selling out the Cristero cause.

For Greater Glory bears witness to continuing religious persecution after the Cristiada ended. Even today, after a recent narrow vote in the Mexican Senate to expand religious freedom, freedom of religion in Mexico remains incomplete. Almost a century later, the promise of the Cristero cause remains unfulfilled.

For Greater Glory is rated R for graphic wartime violence and some disturbing images, including torture and executions of youths and executions of clergy. Some parents may be concerned about clerical involvement in military action. The film also depicts desecration of churches and sacred articles.