This beautiful and star-studded Woody Allen film is cheeky and clever, but flawed.
Camerin Courtney|June 29, 2012
Our Rating

Life is a matter of perspective, Woody Allen seems to be telling us in his follow-up to last year's delightful success Midnight in Paris. In this new geographic location he gives us a smattering of diverse perspectives—new retiree, newlywed, ordinary citizen, hounded celebrity.

But first we are greeted by an Italian traffic cop standing in the middle of a roundabout directing the crush of cars. As he tells us that "in this city, all is a story," and gets distracted with chattering away to the camera, chaos ensues and we hear an off-screen crash. Unfortunately, it's a bad omen for To Rome with Love.

Our new retiree is Woody himself, playing Jerry, a neurotic former opera director who was too avant-garde for his time—and for most people with taste. He travels to Rome with his dour wife, Phyllis (Judy Davis), to meet their daughter's new Italian beau, a handsome idealist whose mortician father Giancarlo (real-life tenor Fabio Armiliato) has the singing voice of an angel. Jerry overhears him singing in the shower one day, and his creative juices begin to flow.

Jack (Jesse Eisenberg) is an architecture student whose contentment with life is gradually challenged when his girlfriend's self-absorbed gal-pal Monica (Ellen Page) comes for a visit on the heels of a painful breakup. While Jack is drawn into her web, he's graced with wise and snarky advice from John (Alec Baldwin), a famed American architect who has returned to his old stomping grounds to reminisce.

Antonio and Milly are young Italian newlyweds coming to the big city so Antonio can interview for a job with his uncle's firm. But a series of mishaps and misunderstandings transform the trip into a series of surprising adventures.

And finally, we meet Leopoldo Pisanello ... 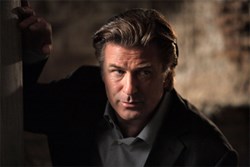