Striking visuals and fun performances are marred by an insensible, jumbled story.
David Roark|March 30, 2012
Our Rating

Mirror Mirror, the first Snow White adaption of the year (Snow White and the Huntsman opens June 1), may be better than expected. In the hands of director Tarsem Singh, the film allures us with striking eye candy from start to finish, and the delightful cast, especially the beloved Julia Roberts, even elicits a few laughs. But, as with all of Tarsem's work (The Cell, The Fall, Immortals), it fails to tell a dense and cohesive story or connect with us emotionally.

Working with screenwriters Melisa Wallack and Jason Keller, Tarsem takes a fun approach to the classic fairy tale. He doesn't just put his own twists and turns on the story—the functionalities of the mirror, the apple, the prince—he modernizes it. Despite living in a dated fantasy world, the characters walk and talk like people today. There's also a self-awareness in how Mirror Mirror satirizes the story and genre—the pretentiousness of Snow White's name, for example. Such an update gives the film undeniable appeal and, to some degree, justifies its being made—after all, if rebooting a franchise, you better do something new.

The cast helps realize this modernization. Playing Snow White, Lily Collins (most notably from The Blind Side), looks like the princess with her pale skin and jet black hair while adding a whole new attitude, replacing naivety with spunk. It's not necessarily a remarkable turn, but Collins has a certain charm that makes her watchable, from a romance between her and Prince Alcott (Armie Hammer of The Social Network and J Edgar) to her humorous interactions with the seven dwarfs, who now live as thieves and rogues (who would have thought?). Roberts stands out the most in spite of her inconsistency trying to use a British ... 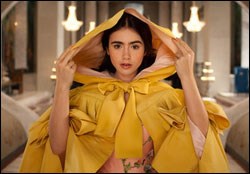