Tim Burton drops the ball on this 1960s gothic soap, continuing his string of middling remakes.
David RoarkMay 11, 2012
Our Rating

Remember when Tim Burton used to make great movies? You know, fun and original stuff like Pee-Wee's Big Adventure, Beetlejuice, Edward Scissorhands and, shoot, even Mars Attacks! Well, with a few exceptions, that old Tim Burton no longer exists. The new Tim Burton cares little about innovation and imagination. As Dark Shadows confirms, he really only cares about his own brand, a business now devoted to middling remakes.

That's not say the Burton brand isn't better than most Hollywood junk—it clearly comes from the mind of a seasoned auteur. It just means that it's not totally realized and, alas, repeated with the same silly shenanigans, like an eccentric protagonist played by Johnny Depp. It also means that it's likely a revision of something that came before, from Roald Dahl's 1964 children's book Charlie and the Chocolate Factory to Lewis Carroll's 1865 fairy tale Alice in Wonderland.

Dark Shadows, derived from a 1960s gothic soap opera of the same name, epitomizes the essence of the Burton brand. Depp's not the film's only weird figure; there are a slew of other quintessential Burton quirks, including pale-skinned characters, cartoonish landscapes, elaborate costumes, and, naturally, Helena Bonham Carter in her usual role of insane adversary. The film hinges on such gimmicks; instead of creating something new, or at least fooling us into thinking he's created something new, Burton provides the bare minimum, and that's it.

These necessities certainly have their charm. Who doesn't enjoy watching Depp in weirdo mode, prancing around, dropping sarcastic one-liners? Playing Barnabas Collins, an 18th century vampire who awakens in the 20th (1972, to be exact), Depp shines brightly despite lurking in the dark. Though now ... 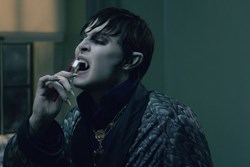