A compelling thriller about the rescue of six Americans during 1979's Iran hostage crisis.
Camerin Courtney|October 12, 2012
Our Rating

Like everyone who was alive during the 1979 Iran hostage crisis (I was eight), I remember the rising count of days the 52 Americans spent in captivity, the ominous pictures on TV of angry Iranians spouting their grievances, the yellow ribbons tied everywhere to express our national concern.

But what most of us weren't aware of during those tumultuous 444 days were that six Americans had sneaked out of the U.S. Embassy in Tehran in the midst of the takeover, and took refuge in the Canadian ambassador's residence. Their captivity—which lasted 79 days—wasn't nearly as austere as that for those at the U.S. Embassy, and their rescue efforts were completely clandestine—but their situation was just as dangerous, as they feared discovery and certain death at any moment.

Even those who do remember the story of this sextet don't know the real turn of events, as international diplomacy and security demanded a fictional spin on the operation. But when the true story was declassified in 1997, it was worth the wait for the details of this crazy covert mission that involved staging a fake sci-fi movie—titled Argo—and passing off the six Americans as a Canadian scouting crew. In other words, movie gold.

Argo opens with a brief history lesson about the Iranian Revolution and the United States's involvement, then cuts right to the takeover of the U.S. Embassy. It's a tidal wave of action and tension we ride pretty much until the end of the film. While CIA agents and other national figures are scrambling to concoct a rescue plan, exfiltration specialist Tony Mendez (Ben Affleck) offers their "best bad idea." He'll fly in, presumably with his six-person team, to scout Iran as a possible location for Argo, bring the ... 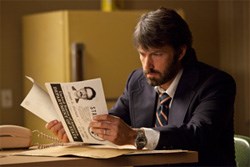