She only recorded a handful of songs before slipping into oblivion. Now it's time to bring her back.
Michael Corcoran|October 16, 2012

The Tompkins Square record label specializes in digging up treasures of American music history, often finding rarely heard gems and re-releasing them—as they did in the magnificent gospel compilations Fire in My Bones (2010) and This May Be My Last Time Singing (2011). Now they've done it again with a release of all 16 songs ever recorded by blind pianist Arizona Dranes, who revolutionized gospel music in the1920s via her raucous playing and singing. The album comes with a booklet about Dranes' life, a compelling read that's almost as good as the music itself. Here's an abbreviated version of those notes.

When Arizona Dranes, blind and broke and a little wary, took a train from Fort Worth to Chicago in June 1926 to record for OKeh Records, there was no assurance that anything would come out of the trip. OKeh told her they were only making "test records" with no guarantee to release them for sale.

No one had ever made a gospel record before that featured piano. And no label had yet tried to market the raucous, sanctified sounds of the Pentecostal church to the new "race records" audience. Arizona Dranes would be the first of her kind.

Whatever trepidation OKeh might've had evaporated on June 17, 1926 when Dranes sat at the piano and, with six songs recorded that day, created a spirit/ flesh communion that would later be known as "the gospel beat." Her locomotive hands drove each other, with the percussive left—the rhythm section—dancing on and around the beat like a jazz bassist, while her right improvised octaves and ran syncopated motives alongside the melody.

This drawling church lady from Texas was playing ragtime, barrelhouse and boogiewoogie! ... 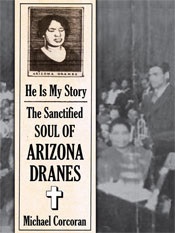