Sounds like a line from a horror movie, doesn't it? But it's from the Bible—Psalm 106:37-38, in fact. It also has all the makings—blood, sacrifices, demons—of a genre hit. And for Scott Derrickson, a devout Christian and writer-director of 2005's The Exorcism of Emily Rose, that might just be the case. 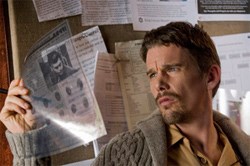 Sinister is Derrickson's scary-as-hell new movie, a mix of the serial-killer, haunted house, and found footage takes on horror. It centers on an egotistical, once-successful-but-now struggling crime novelist named Ellison Oswalt (Ethan Hawke in an utterly convincing performance). Oswalt is doing research for a new book about a house where a family was hanged from a tree, but one of the children went missing. So Oswalt packs up his wife and two young kids, despite their grudging submission, and moves into the house—without telling them of its creepy history. From the start, the headstrong Oswalt is clearly a selfish jerk, far more focused on his work than his family, and nothing will stand in the way of his pursuit of fame and fortune. And he's willing to sacrifice anything—everything—in that quest.

Upon moving into the new house, Oswalt finds a small box in the attic—yes, it's a horror movie, so he goes straight to the attic—with a projector and some Super 8 reels of film. These reels appear to be home videos, with the titles "Hanging Out," "Sleepy Time," "BBQ," "Pool Party," and "Lawn Work," but they turn out to be something else. They turn out to be films—extremely terrifying films—that depict the ritualistic murders of several families over the span of fifty years, including the murder Oswalt is investigating for his book (bet you can't guess its title from the list above). This is where Sinister is most effective in its horror, especially in its use of audio effects and a chilling score. Oswalt is haunted by what he finds, and quickly realizes that he and his family could somehow be linked to the murders and putting themselves in danger. He starts to drink heavily, lose sleep, and confide in a local deputy (James Ransone, in a failed attempt at comic relief). Still, he doesn't see any of this as a sign to give the footage to the police and get out of dodge—to protect his family. No, he sees it as his chance, his catalyst for regaining the success he once knew.

Creepy beings on the move

Creepy beings on the move

As Oswalt becomes totally, myopically absorbed by his quest, things only become darker and scarier around the house—thumping in the attic, strange children in the halls, and other terrifying images that Derrickson captures through cold yet intimate cinematography—and his family is put more and more at risk. Oswalt eventually discovers an obscure symbol in the murder films. This symbol, according to a local professor (Vincent D'Onofrio) who just so happens to be an expert on crime and the occult and who just so happens to be readily available on Skype, represents the Pagan deity Bagul, a deity to whom children were sacrificed. In the home movies, Oswalt discovers the face of the apparent killer, masked with white paint and large, chilling dark eyes—"Mr. Boogeyman," according to some drawings Oswalt has found, and likely the embodiment of Bagul—especially when we see them staring at us from the back yard.

From Oswalt's research, the moviegoer gleans what's happening: children sacrificed to a pagan god, ritualistic slitting of throats as if in preparation for an altar. What Oswalt doesn't understand is that he himself is being supernaturally drawn to do the very same horrific thing; he's just too blinded by selfish ambition to see it. He doesn't even get it when his wife, Tracy (Juliet Rylance), begs that they pack up and leave after learning that their daughter has been talking to a spirit. Oswalt refuses, arguing that he is on to something big, and that writing is the only thing in life where he finds meaning. Tracy responds with what may sum up Derrickson's vision for the film—that where Oswalt should be finding meaning has been standing in front of him all along: His wife and his children. 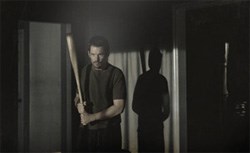 Something wicked this way comes

Something wicked this way comes

But is Oswalt connected to the house's murderous history? And is history about to repeat itself? In asking such questions, filmmaker Derrickson not only invokes the child sacrifice depicted in the Psalms, but also ties it to a different kind of child "sacrifice" very much alive and well today: Our own neglect of our own children. In this way Sinister functions as a metaphor as Derrickson insists that we've taken the idea of family—you know, the stuff of pool parties, barbecues, yard work, bedtime stories, and home videos—and torn it to pieces. And, at the current rate, Derrickson doesn't see it ending well, as in the finale he spins the whole idea on its head and takes it to its logical, ominous conclusion. The movie's end may not be the one we want, but it's a cautionary tale that, if taken to heart, could ultimately point us in the right direction.

Sinister is rated R for disturbing violent images and some terror. Several families, with young children, are shown being murdered, including a family that is hung from a tree. These scenes are frightening and disturbing, but only moderately graphic with little gore. There are moments of terror scattered all throughout the film, from the spirits of children walking around the house, to strange noises coming from the attic.