Heroes like this one are unlikely and unlikable and just like us.
Jackson Cuidon|August 9, 2013
Image: Columbia Pictures
Our Rating

Whether or not you'll like Elysium is almost totally determined by whether you liked director Neil Blomkamp's debut film District 9, because it and Elysium are about as related as two films can be. Both feature men caught up in situations much bigger than themselves, both plots are intensely allegorical, and both are at times heavy-handed in a way that scares off and repels some critics.

While District 9 paired modern times with an alien twist, Elysium moves all the action 150 years from today, sans aliens, into an overpopulated and dilapidated Los Angeles. Matt Damon's Max works as a reformed ex-con in a sort of dystopian factory, manufacturing the very police drones that are comfortable with breaking his arm on the way to work. However, after managerial carelessness results in Damon receiving a lethal dose of radiation, Damon has only five days to reach the ultra-rich space station/lifeboat Elysium, which floats in the earth's atmosphere like another moon and harbors the terraphobic rich of 2154.

Elysium has none of District 9's multivalence, and that has prompted critics to castigate Blomkamp for a preachiness that was really there all along. Maybe Blomkamp's smartest move in District 9 was using the alien Prawns as a metaphorical double whammy. They represented both the struggles caused by apartheid in the past and the modern-day struggles over immigration.

Because of this, Blomkamp made no ideological enemies; people who enjoyed his stance on immigration chose that metaphor, and even if you thought countries should all have the closed-est of borders, well, no one thinks apartheid was a good thing. The even allegorical sell didn't alienate any potential viewers. 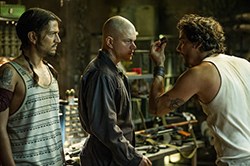