Can we really appreciate what's at stake if there's no risk involved?
Jackson Cuidon|December 13, 2013
Image: Warner Bros.
Martin Freeman in 'The Hobbit: The Desolation of Smaug'
Our Rating

The strangest thing about Peter Jackson's first Hobbit installation, subtitled An Unexpected Journey, was that it seemed like the kind of movie someone would make 15 to 20 years before making The Lord of the Rings.

All the ingredients from LOTR were there—the CGI, the epic battle sequences, the camera work, the epic plots—but where The Lord of the Rings was mature, focused, and straightforward, An Unexpected Journey was silly, immature, and meandering. It felt like the paper of a reasonably skilled college freshman in an English 101 class: full of potential and promise, but sloppily executed.

Which makes it so much weirder that An Unexpected Journey was made almost 11 years after the first Lord of the Rings movie was released. Fans of Lord of the Rings who disliked The Hobbit weren't angry that director Peter Jackson was failing to deliver on "the potential he'd shown earlier"—the Lord of the Rings films had delivered that potential.

All of this meant that expectations for The Hobbit: The Desolation of Smaug (which I'm calling Desolation for the rest of this review, both for length reasons and because it sounds cool) were, at best, confused. On the one hand, audiences were excited to see it because of course we want more Hobbit; we were, frankly, willing to take whatever small taste of Middle Earth we could get, whether or not it was as good as the first three times around.

But, on the other, the failures of An Unexpected Journey made people's guesses about how good Desolation would be to dip sharply. I don't think anyone expected this movie to be taut, a quality the Lord of the Rings movies had in spades. Maybe the biggest achievement of the Rings movies was ... 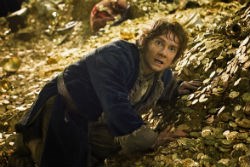