Whedon's Shakespeare adaptation succeeds by not taking itself too seriously, but Shyamalan's sci-fi flick is far too self-important to be any good.
Brett McCrackenJune 7, 2013
Image: Alan Silfen / Columbia Pictures
Our Rating

Summer movie season is often a tale of contrasts—big, sprawling tent pole blockbusters interspersed with small artsy alternatives for the grownups and non-fanboys. The Will Smith sci-fi flick After Earth and Joss Whedon's ultra-low-budget contemporary take on Much Ado About Nothing are case in point. The former represents, sadly, the worst of the sprawling summer blockbuster. We've seen it all before: spaceships, alien monsters, Avatar-esque foreign environs, apocalyptic devastation on Earth, a son trying to make his father proud, etc. —all set in a world so CGI-manufactured that you can almost smell the zeroes and ones.

The irony is that the futuristic Earth, set 1,000 years after humans abandoned the increasingly unlivable title planet, is a far more tired, old-fashioned, and boring film than Whedon's word-for-word rendering of a play originally written by Shakespeare in the sixteenth century.

Shot in just 12 days at Whedon's own L.A. home (on a budget about one hundredth the size of Earth), Much Ado is one of the better modern updates of a Bard classic. Filmed in black-and-white—an effect which at first seems arbitrary but ends up helping to keep the focus on what really matters in the film, the performances—Much Ado is a summer trifle as refreshing as the bubbly in ample supply at the Santa Monica-as-Messina estate of Governor Leonato (Clark Gregg).

Unlike some "Shakespeare for the modern world" films (which strain credulity in their attempts to justify a contemporary setting where Elizabethan language, cultural references, and themes make sense), Whedon opts for a more whimsical, ironic tone. In this slightly off-kilter world, wealthy Californians wear masks ... 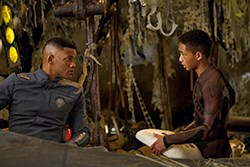 After Earth
expand
hide this