The final installment in the "Hangover" trilogy will definitely give you one.
Timothy Wainwright|May 21, 2013
Image: Warner Bros. Pictures
Our Rating

Your eyes squint at the light, which has directed all its brightness straight at you out of pure spite. You put a hand to your head, which you are certain will explode any moment. Your stomach is a churning, roiling ocean and your throat has been lined with sandpaper. As you curl into a ball and wait for Death to take you, you moan to yourself: "What happened last night?" Then the embarrassing memories come back to you, first a trickle, then a flood.

You saw the third and final Hangover movie.

Now, you may be saying to yourself, "Waitttttttttaminute—I know what that is! That's hyperbole! UNFAIR!" But stay your hands, dear readers: you'll need far more than an Advil and a greasy breakfast to get over the latest from director Todd Philips and his cabal.

The plot is what strays farthest from the narrow road—the flaws in the story beget flaws in the dialogue which beget flaws in the acting. When 42-year-old Adam (Zach Galifianakis) gives his father (Jeffrey Tambor) a heart attack with his unflagging refusal to move out of the house and get a life, the resulting funeral gives the "Wolfpack" a reason to reunite. Adam's family decides to put him into a treatment center, which means that the gang of groovy guys has to hit the road again. Simple enough setup for the madcap odyssey storyline that has been the basis for this whole series.

So it's puzzling when gangster Marshall (John Goodman) shows up and introduces a convoluted subplot about stolen gold bricks and escaped Asian gangster Mr. Chow (Ken Jeong). The mobster dynamic in the first film worked, but The Hangover Part III tries to build on that plot, and takes heaps of exposition to do it. Besides being boring, ... 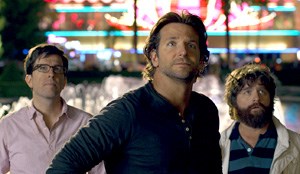