The movies (gratefully) violently counteract any attempt we might make to see them as fun escapism. To see The Hunger Games is not to be entertained. The films' greatest redemptive feature is their pervasive sadness, from the faces of every character to the musical score to the bleak sets. Even during the biggest, most lavish celebrations at the Capitol, we know the ones who are enjoying themselves are ... 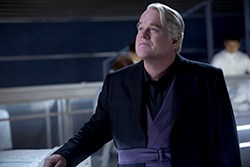