Whatcha got ain't nothin new. This country's hard on people, you can't stop what's coming, it ain't all waiting on you. That's vanity.

The 2007 adaptation of Cormac McCarthy's No Country for Old Men is a tense, tight film with one overarching theme: evil is coming for you, and there's nothing you can do about it. Many commentators see that book and film, along with most of McCarthy's work (including, now, The Counselor, his first original screenplay), as part of a sort of declinist narrative of history: too much has happened for us to ever go back. This world in which we live is irreparably dark.

Certainly, the Pulitzer- and National Book Award-winning novelist is convinced that we are at the mercy of history more than we—especially we Americans—will ever consider fair. Yet No Country's Ellis, uncle to Tommy Lee Jones's sheriff and an ex-law man himself, points out to his nephew that the evil encountered in the terrifying figure of Anton Chigurh, the bolt pistol-toting hitman, ain't nothin new.

It's vanity, in McCarthy's view, to think that we've got a new breed of evil today. It's the same old evil, only now it has bigger guns. And it still strikes at random.

This is what The Counselor is about.

The story in a McCarthy tale is secondary to what the story is driving at, which is always the same two points. One, the world is older than it ever has been, and might be ending at any time; two, in the meantime, it's often a very bad place to live, full of random, senseless evil. There is no victory in a Cormac McCarthy novel. The best anyone can hope for is to survive the apocalypse, or hope his ... 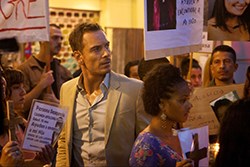