Is it dystopian? Is it apocalyptic? Either way, 'Snowpiercer' is dazzlingly imaginative and unconventional.
Jackson Cuidon|July 1, 2014
Image: The Weinstein Company
John Hurt, Jamie Bell, and Chris Evans in 'Snowpiercer'
Our Rating 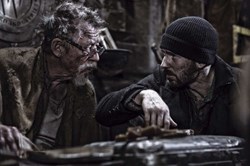 Snowpiercer operates as both an apocalyptic and a dystopian movie, and that means it addresses the fundamental questions of both genres. For apocalyptic movies, the question is simple: "Are we worth saving?" Whether you consult 2012 or Deep Impact or Independence Day or The Day After Tomorrow or The Day The Earth Stood Still—or if you go and look at Genesis 6 (God "regretting" the very creation of man) or Genesis 18, in which Abraham pleads with God to spare Sodom and Gomorrah if he can find just ten good men, or Exodus 32, where Moses intercedes on behalf of the Israelites—through all these different examples, the consistent question is "Is it better for people to be around than to not be around? Is existing better than not?"

The solution proposed by most Hollywood movies is to find the answer in people's response to tragedy. Movies usually tell us that in showing acts of heroism and bravery, we can justify our own existence (the Apocalypse being a sort of tax audit, morally speaking). We see this not just in our movies, but in our responses to national tragedies; the line that got picked up last April, circa the bombing of the Boston Marathon, was "there were always more people running towards the explosions than away from them," and "Look for the helpers. You can always find people who are helping."

Snowpiercer takes a decidedly more pessimistic view, though perhaps also a more realistic one. I won't spoil anything, but no one emerges from this story untainted. By the end, you've learned enough about every likable character that it puts the question at the forefront: "So then, who cares if they all die. Maybe that'd be best."

The movie doesn't conclude on that point, but its willingness to even address that question is both deeply brave and exceedingly rare—most Hollywood apocalyptic movies feel content to just threaten their central characters with Bad Things Happening so that they'll be brave, while still mostly refraining from hurting them. 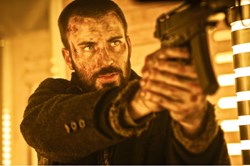 Dystopian stories, by contrast, confront us a question that's not as pithy, but has been haunting literature since the end of WWII: what if it's just so much staggeringly easier to go along with a system you know is not right? Do you do it? What if you're "just following orders?" What if you think you're making a brief moral sacrifice for the "good of the group?" From Brave New World to 1984, from Terry Gilliam's Brazil to The Lives of Others, the fundamental question is whether you can ever escape the system you're in.

Snowpiercer literalizes this question, but never gets too on the nose—from subtle references that you can only get after the fact (an aquarium the rich only poach from twice a year; a garden being meticulously tended; the seemingly endless cycle of revolts aboard the train—what do all these have in common?) to the train conductor's grandiose proclamation that "the train—the train is the world. And all the people on it are Humanity."

Maybe the best thing about the film is the way it seems to root for Life (messy, chaotic, uncontrolled, unsterilized, scary Life) as something to cherish and value above cold and sterile utilitarian calculus: best, because that's not the option I likely would have picked; best, because the movie forced me to reflect on the choices I would have made had I been in that position.

There's too much going on in Snowpiercer to possibly sum up in just one go—in that way it bears far more resemblance to an Art House flick than your standard summertime disaster movie, as the film's willing to not just examine the uncertainty of the issue but really rest in it. It never vocally backs any position 100%, which may leave some viewers upset at being "unsatisfied" (likely the same kinds of viewers who complain when a film's main character isn't "likable"). But it also makes the movie infinitely more thought-provoking than any other dystopian or apocalyptic movie of the past decade. In a world full of Divergents and Hunger Games and 2012s, Snowpiercer not only has the confidence to ask difficult questions—it also has the courage make the viewer answer them for his or herself. 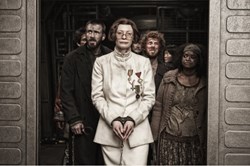 Roughly 60 f—ks and s—ts litter the script, as well as maybe two dozen other third-tier profanities. A character has his arm frozen and then smashed with a sledgehammer; while the action occurs off-screen, it's still a haunting and disturbing moment. Characters predominately fight with melee weapons, and the violence remains around the level of Gladiator, more or less. Characters are also executed with guns, but not on-screen. There's a discussion of some passengers who got so hungry they reverted to cannibalism, even towards babies. Two characters consistently get high off of some kind of industrial waste drug. In the background of one scene in a opium-den it may be possible to discern some nudity, but it's so unclear and non-sexual as to almost be a non-issue.

Jackson Cuidon is a writer in New York City. He tweets @jxscott.