If Bowe was a deserter, I'll be the first to send him a care package in prison.

Providentially, Bob and Jani were traveling in and out of the DC area and so it became a great opportunity for them to stay with us when they were passing through.

After the Taliban freed Bowe, you spoke with both parents. What did they say?

We just rejoiced together in God's mercies. We talked about the media response and their intention of keeping quiet. We prayed together thanking God for his mercies to Bowe and asking for continued protection and healing.

How do you respond to the hostile reactions among some conservative Christians?

This whole thing is the dog of politics wagging the tail of the conservative Christian conversation. Folks are failing to recognize that this is a political football and was from the beginning.

The Bergdahls are just the flavor of the week, and next week it's going to be a different scandal. That's politics. But these are brothers and sisters in Christ. We can have political views on whether Bowe should be in prison, or whether Bob should say the Arabic version of "shalom," but to adopt the rhetoric of the day and use it to guide conversations among Christians about another self-professed Christian--I'm saddened by that.

We live in the grace of God and as we are immersed over and over again in appreciation of his grace to us in Christ; it lives out in peaceful relationships. I would hope that we as believers can be more eager to pursue peace.

Do you believe Bowe is a deserter?

I honestly don't know. Whatever happened--if we saw a Christian couple whose daughter had gotten pregnant or whose son got caught with a bunch of cocaine, we would cry with them and we would help them to walk through the valley.

If this kid made a huge, stupid mistake, that's for the magistrates to figure out, to look at the evidence and to talk to the witnesses.

Right now, we're watching a lynch mob, and Christians are getting engaged in the lynching. In any other situation, we'd be hugging the parents and weeping with them.

What prompted the email you shared?

I'm being asked specifically if Bob is some kind of secret Muslim. People were saying, "The father is a Muslim, look at his beard. Look how he gets up in front of the White House and says one of the opening verses of the Qur'an."

What's been the response of your own congregation in Virgina?

Supportive. We've been praying for Bob and Jani and they've visited our church. I couldn't be more thankful for the way my congregation is handling this. Others have contacted me, saying, "Pass the word on to Bob and Jani that we love them and we're praying for them." 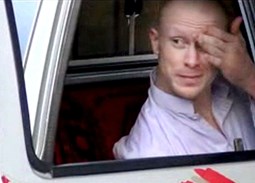 How are the Bergdahls handling all the controversy?

Did Bowe ever discuss his faith with you?

He was at a stage in his life where he was wanting to know if it was his faith or if it was his parents' faith--a young adult kind of thing. He was very intelligent. He wasn't rebellious at all.

Did he ever make a profession of faith?

He did not make a public profession of faith. We were working through that pastorally, and working through this questioning period, and whether he ever got to the place of saying, "Yes, this is my commitment," I don't know. While he was in captivity, he made a point of celebrating Christmas and Easter, and asked his captors to join in with him in celebrating, and I find that profoundly significant.

How would you describe Bowe's personality?

He's intelligent and very well read. His parents are rugged individualists, intelligent, outdoors kind of people. Bowe is the kind of person who'd build his own house, then sit down and read Socrates in the evening by firelight.

How did you minister to Bob and Jani while their son was gone?

Bob's continual communication with me was expressing fear and discouragement, but always coming back to God's sovereignty in this. He believed that God is guiding Bowe through this, that God is protecting Bowe. That was his comfort. He would say that Sundays were one of his most encouraging days because that was the day he knew that people all around the world were praying for Bowe specifically.

How would you like to see the Christian community respond?

There's the parable of the prodigal son. To me, that is a striking parallel. The prodigal son has come home. The elder brother, the faithful son, at the end of Luke 15, is the one standing out alone in the night, and the father leaves the house and goes to the elder brother and says, "Won't you come in and rejoice with us?" I hope that we, the Christian community, could make a distinction between politics and between such offenses.

If Bowe was a deserter, I'll be the first to send him a care package in prison. There has to be a fundamental level at which we can just come around a brother and sister in the Lord, whose son has been held captive by the Taliban for five years, and wrap our arms around them, and cry, and give them a kiss. That doesn't align me with any political party. It doesn't make me spit in the face of soldiers who may have died looking for Bowe. I'm not getting into any of that. If there are criminal things that have happened, by all means, let's have a trial, there's a law system for that. But this is a lynch mob that's happening right now.

What bothers you the most about the responses you've seen?

If you put a bandana on Bob Bergdahl's head and put a duck in his hand, we'd put pictures of him on our walls in our Christian homes. We'd be defending him tooth and nail. Yet here we are saying, "Because he's got a beard, he's a Muslim.' And, "Look he said, Bism allah al-rahman al-raheem [In the name of Allah, the most graceful and merciful] at the White House. He claimed it for Muhammad! This was a secret infiltration thing."

To attack Bob because he has done and said things that are outside of our comfort zone as he's tried to do whatever he could to get his son back, we need to be more gracious. Which one of us is ready to cast that first stone? I don't know what I would have done if it was my son over there. I know Bob has, through the years, professed his faith in Christ and his reliance upon Christ. He's a brother in the Lord and we need to pray with him and love him.

Bowe was a young man with all the dangers of home-schooling – a brilliant and inquisitive mind, a crisp thinker, and someone who had never really been exposed to evil in the world. He was wanting to determine whether the Christian faith was his own, or his parents' and was doing a lot of exploring of ideas – never drugs or alcohol, but trying to be an outdoors/Renaissance type figure. We've stayed in close contact with Bob and Jani, especially since Bowe's capture. Since we moved here to Northern Virginia, Bob and Jani have stayed in our home on a couple of occasions, and I've spoken on the phone with Bob once a month or so.

Bob felt (with some justification) that the US government was not going to engage with diplomatic efforts and so decided to try to free his son himself. He learned Pashtun and developed a lot of contacts in the Middle East. The Qatar connection is one that either originated with Bob or, at the very least, became very personally connected to Bob. Bob has, for quite some time, been saying that the closure of Guantanamo is integrally connected to the release of his son.

There are accusations flying wildly right now. If, at the end of the day, Bowe collaborated with the enemy, by all means let the young man stand in front of a judge. But I don't know, and they don't know.

Did Bob and Jani express to you how they felt about their son being exchanged for five senior members of the Taliban?

They were expecting the uproar. Bob has been very active for years in saying that Bowe's release has to be connected to people leaving Guantanamo. Bob has been politically dogmatic saying that Guantanamo needs to be closed. Bob hasn't been quiet about it. Bob has said, "We've got to close Guantanamo in order to get Bowe home."

What is your hope in all of this?

What I'm trying to do is pour oil on troubled waters to call Christians back to focus on these brothers and sisters in Christ. We need to show mercy here.

Sheryl Blunt is a journalist based in Washington, D.C.