When it's good, it's very very good, and when it's bad it's perfunctory.
Jackson Cuidon|May 1, 2014
Image: Niko Tavernise / Columbia Pictures Industries, Inc.
Andrew Garfield in 'The Amazing Spider-Man 2'
Our Rating 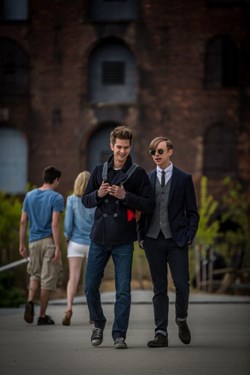 Andrew Garfield and Dane DeHaan in 'The Amazing Spider-Man 2'

On the surface, it seems like 2014's movie audiences don't expect much—these movies aren't expected to compete with The Master or The Act of Killing or whatever. There's no expectation of high-brow quality here. It's an open secret that superhero movies, like their comic book cousins, are first and foremost a commodity—an industry worth billions of dollars per year. David Poland over at Movie City News lays it out clearly: "There are other franchises on other landmarks along the way ... but these big-brand comic books have been box office leaders for 25 years now."

This isn't a bad thing at all—historically, I've loved this mess—but it means modern superhero movies have a strictly defined template. This model is maybe best exemplified by The Avengers: witty characters, unquestionably evil opposition, snappy dialogue, casualty-free action, and most of all: never get too serious. There's a charming shallowness to all of Marvel's recent films.

We want realism only up to a point—and that point is when it makes the fun stop.

This is a problem for the coincidentally-named Marc Webb, director of The Amazing Spider-Man 2, because Webb doesn't seem interested in playing by the rules. While there's virtually no difference between a fighty scene and a talky scene in The Avengers—both are fast, sharp, clean, and hyper-stylized—The Amazing Spider-Man 2 feels grafted together out of two different movies. One is a (500) Days of Summer-like charming dramedy and the other is a completely obligatory superhero movie. It ends up like a muted version of that rhyme, about the girl with the curl in the middle of her forehead: When The Amazing Spider-Man 2 is good, it's very, very good—and when it's bad, it's perfunctory.

I'm trying to work on seeing the good in everything, as sort of a life-project for 2014, so to start with what works in this movie: Andrew Garfield (as the titular arachnohominid) and Emma Stone (his love interest Gwen Stacy) do an excellent job of bringing a sense of lightheartedness to the proceedings, especially considering the film-based-Spider-Men's propensities towards drama and angst, Garfield and Maguire alike. There's a lot of blushing, flirting, and other general chemistry that goes on there, and it is nice—good, charming, likable, whatever—but it's also (more importantly) believable. (Which makes sense, given Garfield and Stone's real-life-couple status.) They seem like high-school kids: dumb, flirty, flighty, kind of indecisive, passionate, passionately aimless. Webb's directed this kind of thing well before in (500) Days of Summer, and he does a good job distinguishing Peter Parker from the list of on-screen superheroes (expanding daily), reminding the audience that Spider-Man is young—really young. 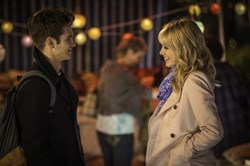 Andrew Garfield and Emma Stone in 'The Amazing Spider-Man 2'

It's hard to over-state the importance of these little humanizing details, but it's the fundamental difference between this film and Marvel-Disney's recent offerings, which are as charming as they are profoundly formulaic: they're good like junk food is good, like cake is good, like anything is good that lets you forget about how bad things are sometimes.

The Amazing Spider-Man doesn't shy away from those complications, but delves into them—but only sometimes. Consider the age-old superhero dilemma: I Can't Be With You Because It Will Put Your Life In Danger (Superman/Batman/Iron Man/Spider-Man says, frowning). When Peter says that quote almost word-for-word in this film, Gwen shoots back: "You want to break up… so that you don't lose me? Who does that work out for?" It's not as clean-cut or morally concise as it usually seems in films like this—and that's because Spider-Man seems to want to vehemently resist being grouped in with Disney-Marvel's "Films like this" genre of superhero movies.

But much like its titular character, The Amazing Spider-Man 2 has commitment issues—specifically, with sticking to trying to be "alternative." Consider Dane DeHaan's character, Norman Osbourne's Harry—shipped off to boarding school at a young age and neglected all his life. Early scenes give DeHaan an ability to showcase what made his breakout performance in Chronicle so captivating—a friendliness and genuine warmth that coexist with deep bitterness and pain. However, barely two scenes pass before the friendliness and warmth in his character get tied to cinder blocks and thrown into the Hudson, and DeHaan becomes just another cackling menace for Spidey to take down. 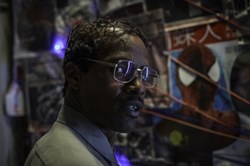 Jamie Foxx in 'The Amazing Spider-Man 2'

By the time the film's 140 minutes are up, it seems clear that Webb doesn't want to make a superhero movie. Perhaps out of spite, when he does do the obligatory Superhero Stuff, he populates it with the most hackneyed, cliched, stilted stuff available. This is why the excellent chemistry mentioned supra is such a bummer—Webb is clearly annoyed by superhero conventions, but uses them anyway.

As for Gwen's line quoted above, it doesn't stop her and Peter from breaking up, then un-breaking up, just like we all expected. In most cases, Webb cedes to the Way Things Are Done, going with the flow while making it clear he wishes he weren't.

And for all the expensive CGI, the lovingly-rendered flapping of Spidey's suit as he plummets face-first toward Sixth Avenue, The Amazing Spider-Man 2 is at its best when it's low to the ground—Peter talking to Harry, Harry talking to Gwen, Peter and Gwen flirting, etc. There's a reason the writers over at Disney-Marvel—who are, by the way, absolute master technicians—keep the interpersonal relations so insubstantial in their movies, so surface level, so consistently witty and quick, as if everyone in the Avengers had relocated from Stars Hollow: it helps us forget how empty all the blowing-stuff-up is. The action in The Amazing Spider-Man 2 is exciting, white-knuckling, heart-pounding, whatever—but it's not 1/10th as real as a single awkward flirtatious conversation, or a rekindled friendship, or the loss of someone you love. It's unfortunate that Webb insisted on injecting the film with the interactions of a much better film—it makes all the web-slinging seem bland at best. 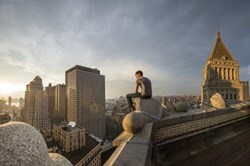 Andrew Garfield in 'The Amazing Spider-Man 2'

The emotional climax of the movie happens with 20 minutes left on the clock, and it's as powerful a moment as I've ever seen in a superhero film. But then Peter goes through an obligatory crisis, and then receives an obligatory pep talk from his aunt (Sally Field), and then goes off to rescue New York from some obligatory assortment of evildoers—and it's all just so tiring.

And as the lights were coming up, and everyone in the theater took off their glasses and breathed in deep, I was struck by the thought I've known has been coming ever since I saw Thor 2: that visual spectacle isn't going to be enough, that at some point seeing the destruction of yet another city block is going to be old hat. That we need actual characters to not just like but to care about, that pretty soon, every time we see an ad for the next Spider-Man movie or Thor movie or Iron Man movie or Captain America movie or Avengers movie or X-Men movie or Ant-Man movie or Guardians of the Galaxy movie, we'll think: again?

The script is speckled with occasional profanities, but no more than 5 "h-ll"s or "d-mn"s apiece. The violence is, for the most part, comic-book like; it's implied by the shot framing that No Pedestrians Were Harmed in the making of this movie. A character dies from a fall; the action isn't gory or bloody, but still may be disturbing to younger viewers. Peter and Gwen make out a couple times, but it's never over-long or inappropriate. We see a characters transform into a mutant-gross-looking-things, but in both cases the transformations are strobe-lit and unclear enough to avoid being graphic, but are still shot in a way that could be scary for younger viewers.

Jackson Cuidon is a writer in New York City. You can follow him on his semi-annually updated Twitter account:@jxscott