You thought you knew what to expect, but you probably weren't expecting this.
Timothy Wainwright|May 15, 2014
Image: Legendary Pictures Funding, LLC and Warner Bros. Entertainment Inc.
Our Rating

Gareth Edwards' take on the classic monster franchise has much of what a great blockbuster should, and I wonder if it won't be a Jurassic Park for millennial teenagers. At the same time, in an odd and pulpy way, it serves as a telling snapshot of a whole host of modern cultural paradoxes: competing commitments to art, commerce, energy, the environment, empire, democracy, and to my surprise, faith. 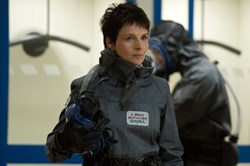 A brief intro to the human component of the drama: Bryan Cranston plays Joe Brody, whose tidy expat life as a nuclear scientist in Japan was forever changed fifteen years before the main events of the movie. Now he comes across as a lonely conspiracy theorist, less malicious than a birther but as obsessed as a grassy-knoller, written off even by his own son Ford (Aaron Taylor-Johnson). But, as you might suspect, Brody the Elder doesn't seem crazy for long.

The movie does some things very, very well. The soundtrack was composed and conducted by Alexandre Desplat, who did the soundtrack for Tree of Life and has been nominated six times by the Academy. It's unrelenting fortissimo that stylishly incorporates Japanese drums, and knows exactly when to drop some BWAAMs. (Note: some outlets have misreported this noise as BRAAM. They are wrong.)

Gareth Edwards is a clear fan of Steven Spielberg, and if Super 8 was the ultimate sign of respect to Spielberg's alien tales, then Godzilla is a take on his monsters. The references and homages are everywhere. Little foreshadowing shots that focus on an iguana sitting on a log and toy dinosaurs on a table. Back spikes sticking out of the water like our favorite shark. And keep an eye out for the fantastic King Kong reference in one of the final fight scenes.

Edwards isn't just riffing, though. The airdrop scene has, rightly, been all over the posters and featured prominently in the trailers. It is hauntingly beautiful. The director described his vision for the scene as "angels descending into hell," and said he was channeling Dante's Inferno. The wide shot of a squad of paratroopers freefalling into a wasteland, leaving contours of red tracking smoke in the sky behind them, could have gone on for twice as long and the effect would only have been better. With a choir singing in the background and an army chaplain reading a prayer from a camouflage covered Bible before the drop, the scene is a hodgepodge of Gustave Dore and glorious Technicolor brought to you by cyberpunks. 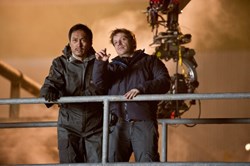 And while this is probably the most somber Godzilla iteration, it doesn't fail to tip its hat to the camp and humor of its predecessors. There are clever satirical shots of vacationers in Hawaii and Las Vegas cavorting before the monsters arrive. And the abbreviation "MUTO" pokes fun at B-movie dialogue as well (David Strathairn's sincere delivery getting a chuckle from the audience).

There's an underbelly to this, though. Ken Watanabe's scientist character explains to U.S. high command that they refer to the monster as "Gojira," which is a nod and a wink to fans and film buffs. Gojira was the title of the original Japanese film, a combination of the words for gorilla and whale. American audiences misheard this as Godzilla and the name stuck. In the theatre, though, this line brought instant laughs from the audience—not because they got the reference, but because the pronunciation still sounds funny to American ears.

Given that Gojira was so popular in Japan because it allowed the country to deal with the terrifying, very real memory of events like Hiroshima and Nagasaki, the aping laughter should probably make us a bit uncomfortable. Inside that original rubber suit was . . . the West (well, technically it was this guy, but you get it).

The filmmakers acknowledge this contradiction in a scene between Strathairn's Military Dude and Watanabe's Scientist Dude, making explicit reference to Hiroshima. But at the same time, this is a movie about American soldiers stepping in to kick butt and save the day. It's a paradoxical commitment to hand-wringing over dark moments of the past, and still asserting American power abroad. There is a similar tension in the environmental overtones to the film.

Oddest of all, though, is the movie's overtly religious tone. On the way to the theater, I mulled over the phrase "puts the God back in Godzilla"—as a parody of Where's Waldoesque spot-the-biblical-themes writing.

But, bizarrely, that tagline is quirkily appropriate for Gareth Edwards' take on the classic giant monster franchise.

Godzilla is the weirdest Christ figure I've ever seen. I'll avoid spoilers, but suffice it to say that the movie honestly portrays a giant lizard with blue atomic breath as a divine figure. The director has been open about this in interviews, and Godzilla is explicitly compared to a god in the film's dialogue.

Some have written about how Westerners, with respectable modes of thought left quite secular, have displaced the numinous into mass entertainment. Godzilla may be a symptom of that. It does somehow work—particularly as a symbol of the terrifying power of God. The tagline for church marketing could be "Godzilla, even less safe than Aslan!" The movie comes out as a sort of Book of Nahum reenacted with action figures from the future, or something. None of this is bad—it's just a major head scratcher.

Critics will point out the cardboard nature of some of the characters, and they're right. Sally Hawkins especially should have had more to chew on (but at least it's nice to see a bit scientific researcher who doesn't moonlight as a Swedish supermodel). But despite this and a few other missteps, Godzilla is a terrifically fun blockbuster that goes great with popcorn, Coke, and the big screen. And, however awkwardly, it could serve as the starting point for some interesting conversations.

Godzilla is rated PG-13 for intense sequences of destruction, mayhem, and creature violence. Many, many, many buildings are destroyed. The monsters are giant and overwhelming, but more likely to thrill than terrify. In fact, I was pleasantly surprised by how family friendly this movie was. It does not throw itself into "dark, gritty take on classic story" territory. It is a PG-13 movie that 12 year olds of stout constitution could watch and love. The married couple do make out, with one slight butt-grab thrown in.

Tim Wainwright's writing has been featured in the Atlantic, CT, and RealClearMarkets. He tweets here and blogs here.