A beautifully shot Polish film that won't leave you for a while after the credits roll.
Alissa Wilkinson|May 22, 2014
Image: Music Box Films
Agata Trzebuchowska in 'Ida'
Our Rating 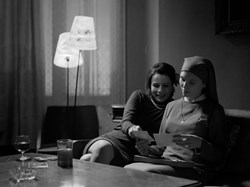 Many shots in the strikingly-photographed film Ida feature people arranged along the bottom of the frame, with ample empty space left above their heads. That space could hold many things—thought bubbles, slogans—but in this case, it seems to hold whatever weighs on the character's mind, controlling their thoughts and actions: some kind of invisible authority, a heavy, unseen power.

For Anna (Agata Trzebuchowska), a young novitiate about to take her vows, this space holds only thoughts of the divine. Raised in the convent, Anna lives in a daily routine of devotion, prayer, and service. It's 1961 and Poland is under Communist rule, but for all of Anna's experience, it could be the Middle Ages.

The Mother Superior tells her she must visit her only living relative before she takes her vows—an aunt whom the sisters had contacted repeatedly after Anna came to them as a tiny child, but who refused to take her in. Anna begrudgingly but dutifully goes, only to discover that her aunt, Wanda (Agata Kulesza), is a hard-drinking, hard-partying, sardonic Communist Party insider, a judge who is not terribly happy to meet her niece. Wanda also has news for her: she's Jewish, actually—a Jewish nun. "They never told you?" she asks. Her name, in fact, is Ida Lebenstein, and her parents were murdered during the Nazi occupation of Poland.

Wanda and Anna—or Ida, now—set out on a road trip to find her parents' graves. Along the way they pick up a young man (Dawid Ogrodnik), a saxophonist, who invites them to come to a gig he's playing that evening. Ida has clearly not experienced this world before. It's not a world weighed down by religious obligation. Rather, it's a country bowed under the weight of its recent tragic history, the memory of people murdered and buried and much more.

This also is what pressed down on Wanda, who cannot seem to cope with existence at all, always looking to escape into a shot glass or a man's arms. Ida watches Wanda with something like wonder. But as they get to know one another, they discover more about one another's secrets. And that sets them both down the path toward their destinies, waking them up from numbness.

Each frame in Ida is like a Dutch painting, or even a Renaissance painting, Agata Trzebuchowska's face as serene as a Madonna. Trzebuchowska is certainly the film's other great asset: all the performances are great, but she is not even an actress, having been spotted by a producer in a cafe and hired almost on the spot. You'd never believe it. Her eyes are like deep, dark midnight pools, imbuing what could have been a rather flatly written character with the sense that much lays beneath the still surface (which helps keep the third act convincing). 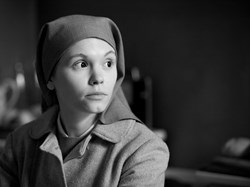 Ida calls to mind quite a range of films. It has kin in Alexander Payne's Nebraska, also a black-and-white film about a trip to find family origins. Serene images of nuns and novitiates singing in the chapel and eating quietly together recall Philip Groning's Into Great Silence. Some of the long driving shots punctuated by conversation made me think of various films by the Dardennes.

At the end of the day, though, I can't help but think about Krzystof Kieslowski, another Polish filmmaker who, like Pawlikowski, started out in documentary and moved toward narrative film, spending some of his career making films outside his native country. Kieslowski's connection to the era in Ida would have been even more direct—he was born in 1941, while Pawlikowski was born in 1957. Kieslowski found himself often working as an outsider, trying to make work under the strictures of an oppressive regime while remaining Polish; Pawlikowski said in an interview that "I come from a family full of mysteries and contradictions and have lived in one sort of exile or another for most of my life. Questions of identity, family, blood, faith, belonging, and history have always been present."

Kiewslowski had a penchant for characters that are "doubled"—a sort of mysterious doppelganger, most clearly (though not solely) demonstrated in 1991's The Double Life of Veronique, in which a Polish girl and her French counterpart seem to be living lives along a dual track. Some read that film as representing the dual identities present in Europe at the time, setting up Communist Poland against the free West—one able to choose her future, and one still bound.

A similar doubling is happening in Ida, though Pawlikowski's isn't as blatant as Kieslowski's. Anna is Ida, Ida is Anna—they are the same person, quite literally, but also represent two possibilities for the same person. One reading of the ending of Ida might be that Anna has to try "Ida" on for size before knowing what choice she should make about her future. That's a reasonable conclusion, indicated early in the film.

But I think there's a second way to think about it: in the end, Ida realizes that she doesn't understand her aunt at all. She can't fathom why she made the life choices she did, and has to consider becoming her aunt's double, inhabiting her aunt's reality—wearing her clothes, engaging in her activities—in order to see what it was to be her, and to understand how she could have done what she did. And, perhaps, Ida's wondering if it's the best way that she can pray for her soul. 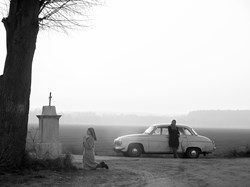 In a very imperfect way, this reminds me of the incarnation—the idea that God could inhabit a human body so that finite people could trust him to know what it is to be human, and to understand how Christ could intercede for them. To become another is in some way an act of love for that other person. Jesus knew what it was to be a person, and not one in an ivory tower.

On a night of unhappy drinking, Wanda tells Ida, "Your Jesus didn't hide out in a cave with books but went out into the world . . . This Jesus of yours adored people like me. Take Mary Magdalene."

Truthfully, though Ida's small, flawed attempt at incarnation was all I could think about while watching the film, I doubt that doctrine is what Pawlikowski had in mind. But it puts me in mind of another Kieslowski film—Blue, in which Julie (Juliette Binoche) comes to realize that she can only love others and experience true liberty by coming alongside them and dwelling in their pain. She takes compassion on those who have hurt her, choosing to stop living life apart from them and start living with them.

The beauty of movies is that the good ones allow us to practice a little bit of flawed and limited incarnation, too. In films, as in good fiction, we get to live a little bit of someone else's reality. That requires being open to the experience, and it requires attention, something that's hard to come by in our world. But a film like Ida gives us a chance to walk alongside the characters for a while, trying to understand their world and their struggles, and it's a pleasure to do it when it's so beautiful.

Wanda makes reference to "carnal pleasures" a few times, and when we first meet her, a man is dressing and leaving her flat. Later, two characters are naked in bed together, though we don't see anything in particular (a naked man does sit on the edge of the bed, but limbs cover all the pertinent bits). A woman bathes while clothed in a nightgown, which gets clingy and a little transparent briefly. There are a few profanities, but the film is in Polish, so we see them in the subtitles. There is a suicide. Characters drink and smoke. And there are references to the atrocities of the Holocaust, including violence toward children.

Alissa Wilkinson is Christianity Today's chief film critic and assistant professor of English and humanities at The King's College. She tweets @alissamarie.