It takes more than one funny idea to make a comedy.
Taylor Lindsay|May 3, 2014
Image: Jamie Trueblood / Focus World
Elizabeth Banks in 'Walk of Shame'
Our Rating

It takes more than one funny idea to make a comedy.

Films that don't seem to grasp this truism are easy to spot—for example, 2009's Bride Wars, or last year's The Heat. At the center of these were what seemed to be a visually hilarious concept: Anne Hathaway and Kate Hudson tackling each other in rage wearing wedding gowns; Melissa McCarthy teaming up with Sandra Bullock as kick-butt female cops for what came off as a second attempt at Miss Congeniality 2.

Elizabeth Banks in 'Walk of Shame'

In each case, one kinda funny five-minute sequence was surrounded by a miserably implausible pile of events, characters, and weak stabs at hilarity.

Walk of Shame is no different, and possibly worse.

Directed by Steven Brill (Mr. Deeds, Drillbit Taylor), the singularly funny concept at this comedy's center is the idea of Elizabeth Banks dazed and confused, literally running around L.A. in a tight yellow dress and high heels. As far as visuals go, it's pure trailer treasure. But the entirety of the movie is a sad mess of shameless stereotypes and a script enslaved to furthering Banks' implausible plight.

Meghan Miles (Banks) is an aspiring news anchor and steady as she goes, fond of proclaiming "I'm a good girl." When her boyfriend breaks up with her, her two best girlfriends take her out for a night of drinks so she can forget about him (in essence, a female version of That Awkward Moment for the first half hour). After going home with bartender Gordon (James Marsden) in an inexplicable burst of spontaneity, she gets a phone call in the middle of the night: the job of her life awaits if she can make it to the news center in five hours. Immediately, she loses her car and her phone and is rendered helpless.

Also, Marsden is a writer of "postmodern romance" by day and a bartender by night. "I want to find beauty and praise it." Swoon.

If this film was just trying to be a more-or-less messageless spectacle, it would have done better to avoid the stereotypes. There's a creepy cab driver, a sassy black bus driver, a desperately lustful synagogue-attender, a perverted 12-year-old, tightly-wound cops, a ditsy best friend, Marsden as Prince Charming again (see Enchanted) and three hoodlumy crack dealers who are really sweethearts deep down.

There's also Gillian Jacobs (Brita Perry from Community). She's here as the other best friend, the one who answers the phone calling Banks a "dirty hooker" and saying things like "Don't be a cock blocker!" At this point, it's almost a Hollywood staple to have this best friend figure, a type most often represented by Krysten Ritter (Confessions of a Shopaholic, She's Out of My League). I've always been bothered by how admirable this character type appears to be, as she devotedly drags her friend out of the house into bold escapades (which usually end at The Club). It's a character typically called "no-nonsense," but more than anything it usually serves to make the main character look more timid and good-girly, and to aid her metamorphous into some sort of unrepressed free spirit by the end. But why is being "good" so gross? 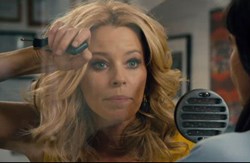 Elizabeth Banks in 'Walk of Shame'

This brings me to the most unpalatable stereotype: the usually-funny Banks is said good-girl, self-proclaimed and unashamed at first. When her manager leaves her the voicemail about the job of her life, he tells her "All that steadiness [stuff] is finally gonna pay off!" But throughout her five hours running in heels through a crack house, the hooker-ridden underbelly of town, a seedy spa, and straight through the freeway, she makes her good girlness seem pitiful and stunting to her rescue (which eventually comes from Marsden and Jacobs).

It's hardly a spoiler to say that when she's finally back in her news-anchor chair and finds herself reporting her own story, she deviates from what she's told to read to vindicate herself instead. "I shouldn't call this a walk of shame, I'm not ashamed! I don't care what people think anymore, cause that's exhausting . . . I'm not safe and I'm not reliable . . . Just be yourself!" She then gives a shout out to those lovable crack dealers, the only people in L.A. willing to loan her their phones.

Of course, her outburst leads to a new and better job offer, and she walks with Marsden down the sidewalk into an actual sunset.

This quasi-romantic unfunny comedy will probably arrive on Netflix in that section called "Films Featuring a Strong Female Lead." But the film—and the female—are far from strong. Let's leave these actors to their strengths and wait for season six of Community and Pitch Perfect 2, and forget that this one happened. 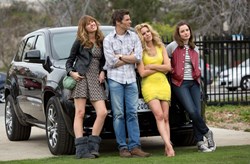 Banks' best friends talk explicitly about sex. A 12-year old and a cab driver ask Banks for sexual favors (though she does not comply). Marsden and Banks drunkenly eat pizza in their underwear together (you don't see them having sex). Characters sell crack. A bus driver uses violence to get Banks off her bus. Jacobs and the crack dealers cuss periodically. An orthodox Jew has a sexual reaction to seeing Banks stumble into his synagogue.

Taylor Lindsay is a writer in New York City. She was Christianity Today Movies' fall intern and contributes regularly to Indiewire.