In trying to tell the origin story of 'Moby-Dick,' director Ron Howard misses the point.
Kenneth R. Morefield|December 11, 2015
Image: Warner Bros.
'In the Heart of the Sea'
Our Rating

If you must go see In the Heart of the Sea, avoid the 3D screenings.

I realize few people read reviews for critiques of the technical elements, but this sea story has some of the worst uses of 3D I have seen. Director Ron Howard and cinematographer Anthony Dod Mantle love to shoot with objects between the characters and the camera. If ever a film begged for deep focus, this is it.

But alas: more than half the frame is frequently out of focus for large chunks of the movie. At first I thought this was an accident or something peculiar to my screening venue, but in at least one scene the focus shifts from foreground to background intentionally. And critics at other screenings in other cities mentioned problems with the 3D as well. I’m not a fan of 3D to begin with, since I think the glasses tend to wash out color, but the cumulative result here is a particularly drab, fuzzy picture.

The film’s visuals aren’t its only problem—just the most noticeable. The screenplay is a messy hodge-podge that can’t decide what kind of story it wants to tell or where its dramatic weight rests.

In the Heart of the Sea opens with a self-tortured Herman Melville (Ben Whishaw) visiting a self-tortured Tom Nickerson (Brendan Gleeson). The author fears he will never be Nathaniel Hawthorne. (Spoiler alert: he’s right.) The last living survivor of the Essex fears that his wife will no longer love him if she ever finds out what transpired on that ship’s fatal voyage. That’s a lot of psychological torment dropped in our lap before the movie even gets out of dock. Nickerson wants to take Essex’s story to the grave, but his wife (Michelle Fairley, who manages to prompt the film’s only laugh) ... 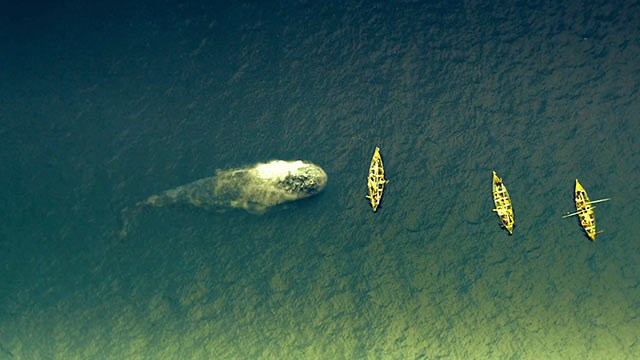