If we walk away from 'The Hunger Games' thinking about big, important cultural questions, then we're better for it.
Jessica Gibson|November 24, 2015
Image: Lionsgate
Jennifer Lawrence in 'The Hunger Games: Mockingjay - Part 2'
Our Rating

2015 has been a bit of a banner year for films about women in violent situations. Whatever your thoughts on action movie tropes are, the fact that we have tropes at all indicates that historically women in action movies don’t get a lot of nuance.

This year, genre conventions have been subtly but effectively challenged by films like Mad Max: Fury Road (check out this fantastic piece by a friend of mine dissecting Furiosa and Co.’s femininity vs. Supergirl’s), Sicario (our review highlights how the film handles women’s disempowerment in war zones), and Ex Machina (the parallel is less stark given that the lead is a female robot, but the film produced a lot of controversy over its proposal that women have to violently remove themselves from objectification).

The Hunger Games: Mockingjay - Part Two joins the lineup in an unexpectedly satisfying way. It conveys the horribly significant consequences of war on individual and social levels in a genre notorious for its heavy-handed disregard for collateral damage. It’s a movie about the effects of war, not war itself, and in particular the effects of war on a young woman.

The first shot of the film shows Katniss (Jennifer Lawrence) having a neck brace removed and struggling to speak after being attacked by her former lover, Peeta (Josh Hutcherson), at the end of Mockingjay - Part One. This shot establishes how director Francis Lawrence approaches all of the violence in the film: frankly, humanly, without spectacle or exploitation.

As Katniss recovers, the Districts’ rebellion against the Capitol is in full swing. They’ve taken ground all the way into District 2, the last stronghold of support for the Capitol. President Coin (Julianne ... 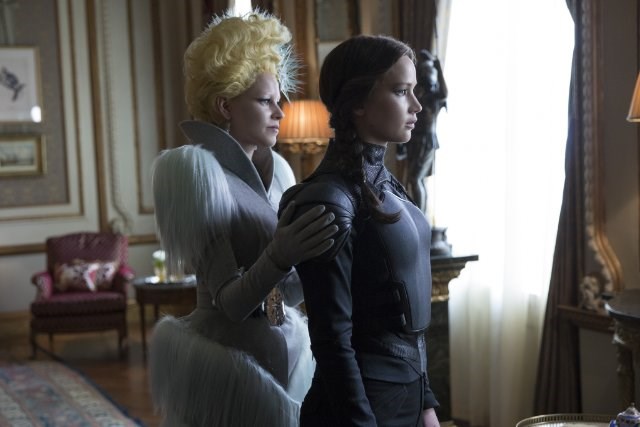