Tom Lin, who has dedicated his entire career to campus ministries in the United States and overseas, has been named the new president of InterVarsity Christian Fellowship.

In August, the Taiwanese American will become the organization’s first non-white president. Over its 75-year history, InterVarsity has made diversity a priority through multiethnic ministry initiatives—including the Urbana conference that Lin directed for the past five years—and internal programs designed to develop minority leaders. 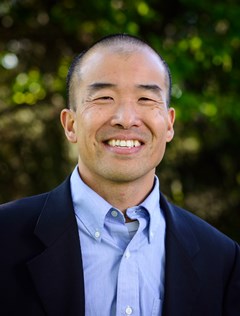 “We’ve got so many men and women, ethnic minorities, who serve in leadership at InterVarsity. We’ve worked at it, and we’ve continued to learn and grow. We never say we’ve arrived, but this is a significant moment for InterVarsity,” the 43-year-old told CT. “It is significant … for any large, North American evangelical organization to have a non-white president.”

Lin is also the first president to begin working with InterVarsity as a student. He’s been involved in campus ministry for 25 years and began an Asian American InterVarsity chapter at Harvard University, his alma mater, in 1994.

In addition to developing a campus ministry movement in Mongolia, Lin served as a campus staff member in Boston, regional director, and vice president for missions. Part of saying “yes” to those opportunities, though, meant saying “no” to his first-generation parents’ career expectations.

“Tom’s story reflects the way the gospel intersects the ‘model minority’ narrative,” said Greg Jao, a fellow InterVarsity vice president, in an email to CT. “He’s an academic all-star who has submitted to Jesus’ claims to his talent and future. He’s wrestled with obtaining parental approval. He’s broken through the bamboo ceiling that often confronts Asian Americans in the corporate world.”

Another InterVarsity leader, Kathy Khang, told CT that as more students, Asian American or not, weigh their own call to ministry against outside opposition, “the fact that he has walked that himself brings a great deal of validity to their experience.” (Khang participated in The Daniel Project, InterVarsity’s program to train Asian American leaders, which CT reported on in 2014.) Both Khang and Jao also commended the international experience and perspective Lin brings.

“These two recent appointments demonstrate that Asian Americans are increasingly poised to step into significant leadership roles, particularly within organizations that have been intentional about cultivating leaders of color,” Helen Lee, an Asian American speaker and author who works as an editor with InterVarsity Press, told CT. “In Tom and InterVarsity's case, we are seeing the fruit of decades of investment and commitment to multiethnic ministry, both externally and internally.”

As president, Lin will continue to guide 41,000 students on 650 campuses through ongoing challenges regarding religious freedoms and secularizing student bodies. InterVarsity committed to reinventing itself in response to university policies that have forced more than 40 of its chapters to change their structure or lose campus recognition.

“I’ve been encouraged by the courage and boldness of our InterVarsity staff and our students on campus,” said Lin, who notes that not only have groups stood firm on their doctrinal basis, they’ve continued to grow and thrive. “It has been amazing, the growth we have in the midst of challenges in the wider culture.”

Lin follows interim president Jim Lundgren and former president Alec Hill, who left the position a year ago to receive cancer treatment. After a bone marrow transplant from his brother last August, Hill returned to the organization a few months ago to mentor staff and oversee special projects. He is “thrilled” at the board’s choice for his successor.

“Tom was our best internal leader, period,” he said. “What happens when you have a critical mass of ethnic minorities and a sense of intentionality is that the pool gets richer.”

Beyond his involvement with InterVarsity, Lin serves as an international deputy director for Lausanne Movement and a trustee for the Crowell Trust and Missio Nexus.