Just a few months ago, Britain announced the appointment of a Minister of Loneliness. The post reflects a rising epidemic that’s unique to 21st-century Western society: Many of us are hyperconnected online but simultaneously disconnected from substantive community. We have dozens of “followers” but few true friendships. We can connect with the world with the touch of a button—or the command of our voice—and yet we hardly know our neighbors. The net result? Loneliness. The increasingly common response: suicide.

Each year, more than 44,000 people die by suicide in the United States. It is estimated that 25 times that number attempt suicide each year. And the numbers have steadily risen since 2006. Add to that the number of individuals who have chosen physician-assisted suicide—in 2015, 301 people died under Death with Dignity acts in the states of Oregon and Washington alone—and we’re facing a lot of people who have answered “Why not die?” with an empty silence.

The vast majority of suicides of elderly or terminally ill people or those with disabilities occur quietly within homes and institutions, far from the media, the courts, and the public eye. These are hurting, despondent people who never make the news and only rarely appear on your Facebook feed. These are the ones living a quiet desperation: The woman with cancer, seesawing in and out of remission. The young boy in a semi-comatose condition, making eye contact, half smiling, and then drifting away again. The carpenter who broke his neck falling from a second-story window and now, abandoned by his wife, lives in a nursing home.

I, too, have lived in this space of despondence—particularly during the first few years after my diving accident. 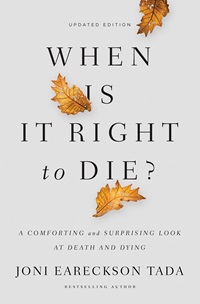 Years ago, when my husband, Ken, was a high school government teacher, he asked me to speak to his classes on the subject of legalizing euthanasia. This was well before California had legalized medically assisted death, but plenty of initiatives were testing the waters. Ken wanted me to talk to his students about the implications of a right-to-die law. The classroom was crowded with kids standing along the back and leaning against the chalkboards covering the walls.

I was surprised by how interested they were as I divulged my despair of earlier days. I admitted my relief that no right-to-die law existed when I was in the hospital and hooked up to machines. I then underscored how critical it was for every student to become informed and involved in shaping society’s response to the problem. Then I added, “What role do you think society should play in helping people decide when it is right to die?”

A few hands went up. I could tell by their answers that they felt society should take action to help hurting and dying people—some students insisting on life no matter how burdensome the treatment and a few wanting to help by hurrying along the death process. One student shared how his mother was getting demoralized by the burden of taking care of his sister with developmental delays. He felt society should, in his words, “do something.”

“Like ... I’m not sure, but society ought to get more involved in the lives of people like my mother.”

I glanced at Ken. He nodded, as if to give the go-ahead to take a free rein with this young man. “May I ask what you have done to get more involved?”

The student smiled and shrugged.

“How have you helped alleviate the burden? Have you taken your sister on an outing lately? Maybe to the beach?” I teased. “Have you offered to do some shopping for your mother? Maybe your mom wouldn’t be so demoralized, maybe she wouldn’t feel so stressed or burdened, if you rolled up your sleeves a little higher to help.”

A couple of his friends by the chalkboard laughed and threw wads of paper at him. “Okay, okay, I see your point,” he chuckled.

I smiled. “My point is this: Society is not a bunch of people way out there who sit around big tables and think up political trends or cultural drifts; society is you. Your actions, your decisions, matter. What you do or don’t do has a ripple effect on everyone around you. And on a smaller scale, your participation can even make a huge difference in what your family decides to do with your sister.” I paused, scanned the face of each student, and closed by saying, “You, my friends, are society.”

Years later, I still hold to this fundamental truth: that the sick and the well are inextricably connected in community. Those on the margins—the depressed, the ill, and the dying—need us. But the converse is also true: We need them, too.

Many of us who have experienced disability or depression (or both) tend to be private people; we would like to be able to make a life or death decision in a vacuum or even at an arms-length distance from others. But we can’t.

When people maintain that their death is their own business and the business of “those I love,” they do not consider the significance of their decision on the wider circle of life. A decision to cut life short, even if only a few months, does not stop with “those I love,” but affects a whole network of relationships: friends, former colleagues, teachers, distant family members, casual acquaintances, and even nurses and doctors who occasionally stop by your bedside.

In other words, it matters to society. The cultural drift is channeled by your decision to either pull the plug or hold on to life.

Just what effect might your decision have? Your gutsy choice to face suffering head-on forces others around you to sit up and take notice. It’s called strengthening the character of a helping society. When people observe perseverance, endurance, and courage, their moral fiber is reinforced. Conversely, your choice to bow out of life can and does weaken the moral resolve of that same society.

Years after my hospitalization, my mother continued to receive letters from nurses, cafeteria workers, and a family whose daughter had suffered a severe brain injury and had been hooked up to machines two beds away from me in the intensive care unit. My parents made gutsy choices that involved facing suffering head-on. And the decisions they made regarding my care had a lasting impact on these people. And who knows what ripple effects have come from the choices they have made in the years since?

The life of Christ gives us an example. In the face of profound pain, even he was tempted to give in. He sought, if possible, to avoid the suffering of the cross, pleading, “Father, if you are willing, take this cup from me.” In Gethsemane, as the shadow of his death approached, Jesus felt alone and distressed. So he turned to his Father, the only one he could talk to. Scripture tells us that, as his anguish increased, “he prayed more earnestly.”

But although Jesus suffered, his decision to face the Cross squarely secured a deeper meaning for the suffering of us all—more meaning than we could possibly imagine.

More than 50 years after a 1967 diving accident left her paralyzed, Joni Eareckson Tada leads an international disability ministry (Joni and Friends) and is a best-selling author and sought-after speaker. In addition to living with quadriplegia, Joni is a breast cancer survivor and suffers from chronic pain. This adapted excerpt was taken from When Is It Right to Die?: A Comforting and Surprising Look at Death and Dying by Joni Eareckson Tada. Copyright © 2018 by Joni Eareckson Tada. Used by permission of Zondervan. www.zondervan.com. All rights reserved.