The problem is, which one?
Kutter Callaway|January 3, 2020
Image: John Golden Britt / Netflix

On January 1, Netflix released its latest über-bingeable series, Messiah, telling an all-too-believable story about the rise of a contemporary messianic figure known as Al-Masih (played by Mehdi Dehbi). Appearing out of nowhere in modern-day Syria, he begins to heal the wounded, stand in the path of tornadoes, and even walk on water. Following each miraculous feat, growing throngs of faithful believers from around the world become increasingly convinced that this man has been sent from on high.

But it isn’t until Al-Masih calls for the disruption of the religious, social, and political orders of the day that he catches the attention of the CIA and special agent Eva Gellar (Michelle Monaghan). Claiming to be divine is one thing. Threatening the vested interests of global superpowers by calling for their complete disarmament is quite another, which is why agent Gellar commits herself to exposing Al-Masih as the fraud she knows him to be. A game of cat-and-mouse quickly ensues as agent Gellar moves ever closer to the revelation of Al-Masih’s true identity. Is he the second coming of the Messiah as his followers believe? Or is he simply another opportunistic charlatan suffering from a messiah complex?

Messiah is a genuinely entertaining show. But it’s also a thoughtful exploration of the infinitely complex and increasingly fraught political and global landscape we inhabit. The reason a show like Messiah is worth our time is not because it is “family-friendly” (it’s rated TV-MA) or because it depicts (or fails to depict) a Christian understanding of the end of the age. Rather, it’s because the show confronts viewers with what Martin Luther King Jr. called “the fierce urgency of now.” Messiah presents Christians in particular with a rare opportunity to reflect upon not the distant future, but the present. In doing so, it presses us to consider what kind of faith we need to embody if we are to become credible witnesses in such a time as this.

Let’s not sugarcoat it. The times in which we live are in flux. There is no shortage of voices suggesting that if certain politicians are elected to office (or not), or certain industries are allowed to survive (or not), or certain ideas are given airtime (or not), the world as we know it will come to an end. Some of this is simply clickbait, engineered by architects of fear. But some of it is based in reality.

The globe is shrinking.

The threat of mass shootings hovers over our schools, our public gatherings, and our places of worship.

The world, it would seem, is on fire. Fear and uncertainty have set it ablaze.

Historically speaking, this is nothing new, so we shouldn’t make too much of how chaotic the world appears in comparison to past eras. But the constant disruption and tumult should be a sign to us. Just as Jesus indicated, they create the necessary conditions for messiahs of various kinds to emerge. He said as much to his disciples:

As Jesus was sitting on the Mount of Olives, the disciples came to him privately. “Tell us,” they said, “when will this happen, and what will be the sign of your coming and of the end of the age?” Jesus answered: “Watch out that no one deceives you. For many will come in my name, claiming, ‘I am the Messiah,’ and will deceive many. You will hear of wars and rumors of wars, but see to it that you are not alarmed. Such things must happen, but the end is still to come. Nation will rise against nation, and kingdom against kingdom. There will be famines and earthquakes in various places. All these are the beginning of birth pains. …

“At that time if anyone says to you, ‘Look, here is the Messiah!’ or, ‘There he is!’ do not believe it. For false messiahs and false prophets will appear and perform great signs and wonders to deceive, if possible, even the elect. See, I have told you ahead of time. So if anyone tells you, ‘There he is, out in the wilderness,’ do not go out; or, ‘Here he is, in the inner rooms,’ do not believe it. For as lightning that comes from the east is visible even in the west, so will be the coming of the Son of Man (Matt. 24:3–8, 23–27).

It’s pretty interesting that Jesus frames his comments about the destruction of the temple and his second coming in terms of the human tendency to believe. Rather than provide his disciples with a roadmap to the future, complete with step-by-step instructions for what to do and when to do it, Jesus reminds them that the profound faith they demonstrated by dropping everything to follow him could also make them susceptible to deception. Under certain conditions, says Jesus, their propensity to believe could become a liability. It could even lead them to place their faith in false messiahs.

Part of what makes us human is the network of built-in psychological mechanisms that give rise to belief. As my colleague Justin Barrett has suggested, humans are “born believers.” Whether religious or not, to be human is to interact with the world faith-fully, to devote ourselves to something or someone.

Or, as Al-Masih puts it to agent Gellar in response to her claims of atheism, “Everybody worships. The only choice is what we worship.”

Regardless of whether the show reveals him to be the true Messiah (no spoilers!), Al-Masih speaks the truth on this. Since the Garden of Eden, our core human failure isn’t disobedience or pride or the absence of faith (although those are certainly reflections of our fallen state). Rather, it’s our tendency to point our sincerely held beliefs in the wrong direction (Rom. 1:21–23). Another word for it is idolatry—devoting ourselves ultimately to that which isn’t ultimate.

Despite our best efforts, humanity suffers most fundamentally not from a lack of faith, but from a misplaced faith. 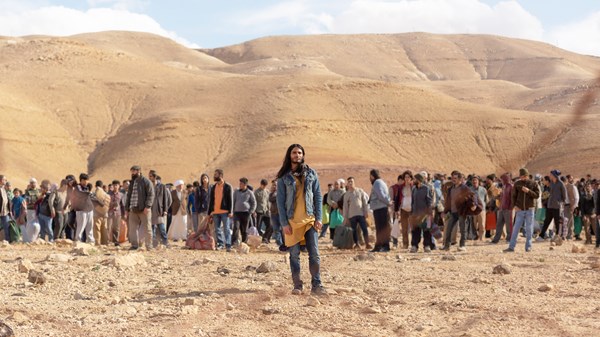 In this respect, beneath the surface of its otherwise fast-paced narrative, Messiah finds a deeper resonance with Jesus’ words. Much like first-century Palestine, the contemporary world that Messiah depicts is one in which religious, geopolitical, and ethnic identities are colliding in a highly contested space. Impoverished people are oppressed by an increasingly wealthy and powerful elite. And anytime this happens, whether today or 2,000 years ago, certain individuals are able to gain a following because people are desperate to put their faith in something or someone who promises them safety, security, and peace.

In other words, messianic figures aren’t just exceptionally cunning humans who leverage chaotic situations for their own gain (although they are). Messiahs are made. And we are the ones who make them.

We make them anytime we pledge our loyalty to religious, business, or political leaders and believe when they say they alone can fix what ails us, they hold the truth, or they are worthy of our devotion. We make them anytime we “betray and hate each other” (Matt. 24:10) over differing ideologies. And we make them whenever we abandon our primary calling to love God and others by replacing that calling with another passion project or cause.

Jesus was fairly clear about where we should locate our particular moment in the grand scope of history. “The end is still to come,” he told his disciples. “All these are the beginning of birth pains” (Matt. 24:6, 8). What this doesn’t mean is our present experiences are somehow insignificant or less painful than what’s to come. It simply means that, in order to live as “faithful and wise servants” (v. 45), we have to operate with an accurate picture of reality, and this starts by acknowledging that the end has not yet come. The sociopolitical turmoil, the wars, the natural disasters, and even the emergence of false prophets serve as an indication that “the whole creation has been groaning as in the pains of childbirth right up to the present time” (Rom. 8:22). And it is in this time—not some other time—that God has called us to demonstrate a faithful presence.

Our time is best spent, says Jesus, not in quibbling over which charismatic leader, or which organization or technological innovation, will or won’t save us, but in remaining faithful to who God has called us to be here and now.

So you also must be ready, because the Son of Man will come at an hour when you do not expect him. Who then is the faithful and wise servant, whom the master has put in charge of the servants in his household to give them their food at the proper time? It will be good for that servant whose master finds him doing so when he returns (Matt. 24:44–46).

Messiah invites people of faith to reflect on what it means to remain steadfast in a tumultuous world and how the times in which we live affect who and what we believe in. The show reminds us that messianic figures are not so much the source of our false beliefs as they are the product of our misplaced faith. In times such as these, when the human propensity to believe is at a fever pitch, we must decide which messiah we will follow.

Kutter Callaway is associate professor of theology and culture at Fuller Theological Seminary and co-director of Reel Spirituality. His most recent books are Deep Focus: Film and Theology in Dialogue and The Aesthetics of Atheism: Theology and Imagination in Contemporary Culture. He hosts the Kutter Callaway Podcast and tweets @kuttercallaway.