Jesus is the reason for the season. But he doesn’t show up much in the top Christmas songs played on Spotify.

According to October 2021 data from the streaming service collected by Every Noise, the most-played Christmas song around the world is Mariah Carey’s “All I Want for Christmas,” followed by Wham!’s “Last Christmas,” and Ariana Grande’s “Santa Tell Me.” Some top songs make oblique references to the religious aspect of Christmas, but most stick to love, the weather, and an occasional chestnut.

Globally, the most popular Christmas song to mention Jesus is Boney M.’s “Mary’s Boy Child/Oh My Lord,” which comes in at No. 71. It is followed by Nina Nesbitt singing “O Holy Night” at 79 and Josh Groban and Faith Hill performing “The First Nöel” at 90.

The presence of Jesus in popular Christmas music varies widely by country, however, revealing differences in musical taste, holiday traditions, and the spread of Christianity by missionaries, militaries, markets, and immigration.

In Greenland, the top Christmas song to mention Jesus is in Danish, while in Vietnam, it’s an English rendition of “God Rest Ye Merry Gentlemen.” In Russia, the true meaning of the day is heralded by Diana Ross, who sings that “On Christmas morn new hope is born,” while in Qatar, the most popular Christian Christmas song is a hit from the Philippines that places Jesus at the center of the celebration: 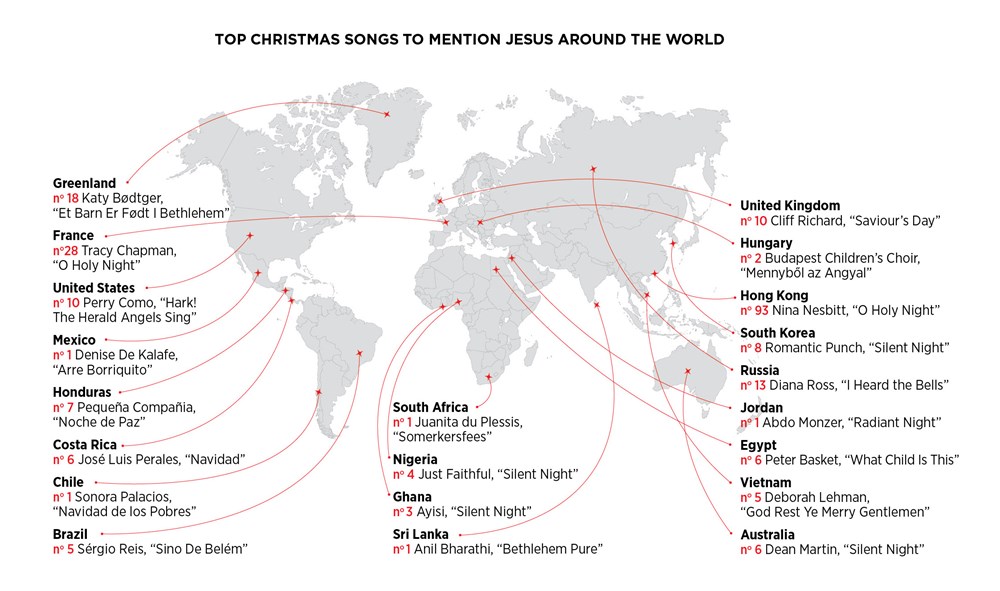