Religious worldviews and attitudes may be a key motivation for abstaining from pornography, viewing premarital sex as wrong, and refraining from sex until marriage.

So does religious behavior correlate with sexual abstinence? The answer is yes. 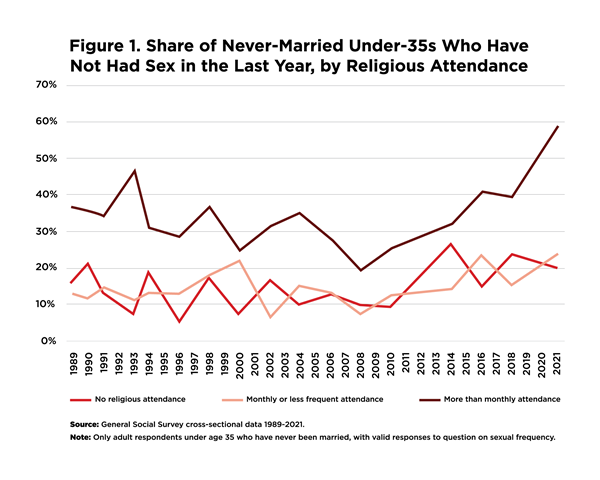 In reality, both stories are probably true. Doubtless, changes in American culture writ large have made religious norms harder to square with day-to-day life for young people spending more and more years without a spouse, and some young adults have decided that the cost of compliance with religious sexual norms isn’t worth paying, as declines in church attendance may indicate.

Among adults under 35 who have never been married, the share who are frequent religious attenders fell from over 30% in the early 1990s to under 20% today. But while significant, these changes in religious attendance have been far too gradual to explain the whole trend observed in sexlessness.

In particular, there has been essentially zero change in religiosity among unmarried young adults in the GSS sample since 2008. So while compositional changes may matter, the behavior of religious people has changed too. This would seem to indicate that the current generation of religious young adults is more scrupulous about avoiding premarital sex than the last generation or two.

Increasingly delayed marriage has a large and well-understood effect on sexual frequency among American adults. But the rise in sexlessness among unmarried adults is not as well understood. If the data from the General Social Survey is to be believed, a key part of this story of changing sexual behavior in America is a change among religious people, or others, who believe premarital sex is wrong.

Increasingly, religious young adults are “practicing what they preach,” adopting a distinctive set of sexual behaviors. As a result, the growing diversity and polarization that typifies so much of American life is reaching even further—even into bedrooms.

Lyman Stone is a research fellow at the Institute for Family Studies, chief information officer of the population research firm Demographic Intelligence, and an adjunct fellow at the American Enterprise Institute.

This research was excerpted with permission from a recent article published at the Institute for Family Studies blog.