The Virgin of the Passion, also known as Our Lady of Perpetual Help, has been called the most popular Christian icon of the 20th century. I would argue the same applies to our own century as well. As an art history professor, I’ve been chasing her around the globe for nearly two decades (and have now collected those studies in my recent book, Mother of the Lamb: The Story of a Global Icon).

Here’s what you need to know about her.

1. Where does the story of the icon start?

The first surviving instance of the image appears on the island of Cyprus, where the icon was painted as an Eastern Orthodox response to Western Crusaders occupying the island—specifically King Richard the Lionheart of England and the Knights Templar. After the Knights slaughtered the Orthodox population on Easter morning of 1192, the image was offered as a prayer of lamentation. The angels flanking Mary traded their scepters of triumph for instruments of defeat: the cross, the spear, and the sponge.

Jolted from their onetime position of power on Cyprus, the island’s Orthodox inhabitants were forced back to the original political conditions once faced by Mary and Jesus. As the Byzantine Empire slowly crumbled, the Virgin of the Passion emerged. From the crags of the Balkans to the caverns of Mediterranean islands, this icon surfaced wherever Eastern Christian political power lost its ground.

Given those origins, the icon is relevant to Christians anywhere in the world who may be losing the power and influence they once enjoyed. The image tells us that sometimes the loss of power is not an end but a beginning. 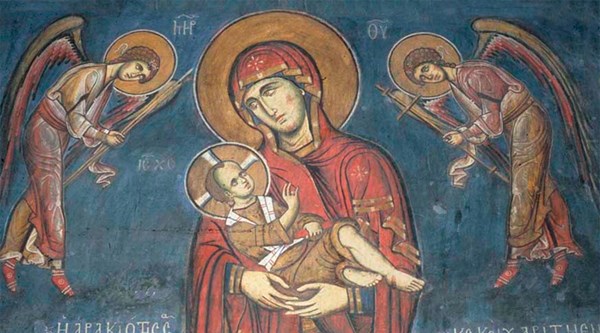 The Virgin of the Passion from Cyprus

2. What are some contemporary examples of this image?

Well, there are too many to count. The Virgin of the Passion shows up in The Avengers, the finale of the TV series Justified (its concluding scene, no less), and also the 2012 London Olympics, when an Ethiopian Orthodox runner unfurled her again to the world by pulling a cloth icon out of her jersey.

Perhaps the most timely example is one that lies dormant in the heart of contemporary Moscow, where—as I’ve recently argued—the Virgin summons Russia back from the war in Ukraine to a state of peace. Fittingly, she’s all over Ukraine as well. 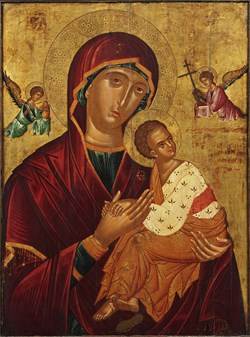 The icon often appears in ways that check the abuse of political power. As the patroness of Haiti, for example, the image is directly associated with the only successful slave revolt in human history.

3. Where does she show up in history?

When the city of Rome was sacked in the fifth century, Christians like Saint Augustine responded by exalting what he called the City of God over the City of Man. But what if the capital of a Christian empire collapses? The Eastern Roman (or Byzantine) Empire had to ask that question when Constantinople (now Istanbul) fell to the Ottomans in 1453. I would argue that the Virgin of the Passion icon provided the same service for that disaster that Augustine provided in his famous book City of God. But this time the answer came not in writing but in paint.

As Orthodox Christian refugees piled onto Crete after the fall of Constantinople, the icon was revived and spread from that island throughout Europe. As with Cyprus centuries earlier, when Christians faced political upheaval, the icon of Jesus and Mary suffering their own disaster ministered profoundly to those displaced by the Ottomans.

Then, as now, she showed that the Christian faith is not dependent on temporal political entities to survive. I hope the analogy to our own moment is clear, as American Christians face new challenges. We certainly need this icon today.

4. Where is this particular icon in the United States?

Considering the icon’s historical connection to territorial loss, it’s not surprising that Native Americans revere this particular version of Mary. She’s the titular icon of the Catholic Cathedrals of Rapid City, South Dakota, and Oklahoma City (a point I first made in The Everlasting People: G. K. Chesterton and the First Nations). 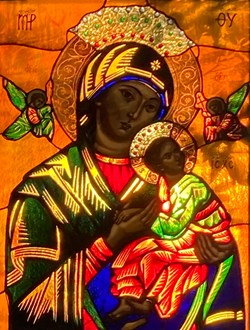 The Virgin of the Passion at St. Thomas Aquinas University Parish in Charlottesville, VA

The icon has a large following among Black Catholics as well. In the heart of St. Louis at Saint Alphonsus Liguori Catholic Church (nicknamed “the Rock”), visitors will find a fully Africanized Gothic environment. Black saints, Coptic iconography, and African drums grace the space along with its famous icon, Our Lady of Perpetual Help.

The South has her too. Not long after the Unite the Right riots of 2016, a chapel featuring the icon (pictured here) was erected in Charlottesville, appended to St. Thomas Aquinas University Parish Church. As the statues of Robert E. Lee and Stonewall Jackson came down, she filled the ensuing void with beauty.

Wherever you are, if you plug “Our Lady of Perpetual Help” into a search engine, you’ll likely find that you’re surrounded by the image. If you have eyes for the icon, you’ll see her again and again.

5. But aren’t icons like these mostly for Catholic and Orthodox Christians?

Sure, but not only for them. This particular icon scrambles our tidy church categories. Catholics have claimed the Virgin of the Passion as their own. (Their renaming her Our Lady of Perpetual Help was a strategic move.) But as mentioned, she was originally created as an Orthodox response to Catholic violence.

The Orthodox claim her, but they would have to concede that she’s most heavily embraced by Roman Catholics, not to mention Coptic Orthodox and Ethiopian Orthodox Christians. She is therefore African Orthodox as much or even more than she is Greek Orthodox.

As evangelicals reckon with their changing influence in American life, they too might consider embracing this icon of suffering love. Martin Luther celebrated Mary for his entire life, but he’s also well known for his anti-triumphalist “theology of the cross.” The Virgin of the Passion brings together Luther’s love for Mary and the crucified Christ.

In his carol, “What Child Is This?” the Anglican hymn writer William Chatteron Dix put it this way:

Nails, spear shall pierce Him through,
The cross be borne for me, for you.
Hail, hail the Word made flesh,
The Babe, the Son of Mary.

That is the Virgin of the Passion icon. The cross does not dampen our Christmas celebrations; it deepens them.

Matthew J. Milliner teaches art history at Wheaton College. He is the author of The Everlasting People: G.K. Chesterton and the First Nations and Mother of the Lamb: The Story of a Global Icon.