If you attend this year’s performance of Handel’s Messiah by the Des Moines Community Orchestra, you’ll walk into the sanctuary of Grace United Methodist Church and notice the orchestra, of course. But there’s no choir.

Isn’t Messiah famous for the exhilarating “Hallelujah” chorus? What about “For Unto Us a Child Is Born”?

This time, the choir is you—the audience, that is. You can borrow a score, and there are even markings among the seats to divide the audience by vocal part—soprano, alto, tenor, and bass, though sitting in your section is optional.

Messiah sing-alongs, also known as “Scratch Messiahs,” are a long-standing tradition in the United Kingdom and United States, dating back to the first half of the 19th century. Attendees get to step in and cocreate a centuries-old musical work that tells the story of Christ’s life from incarnation to resurrection.

For the Des Moines orchestra and many other community groups and ensembles around the country, this year is bringing a return of the tradition after a two-year pandemic hiatus.

“There’s nothing like conducting it,” said Carl Johnson, the conductor of the Des Moines Community Orchestra for the past 20 years. “It’s so big and powerful. And you look out at the audience, the looks on their faces … that’s worth it.”

Handel’s Messiah premiered in Dublin on April 13, 1742, as a charity concert benefiting two hospitals and prisoners’ debt relief. Although the work is now associated with Christmas, it is historically linked to Easter: Handel conducted annual Easter performances of Messiah at the Foundling Hospital in London beginning in 1749.

By 1742, Handel had already written several sacred oratorios, including Saul, Israel in Egypt, and Esther. Oratorios, unlike operas, are not theatrically staged. In a sacred oratorio, the “action” is usually imagined as soloists deliver recitative (a section of “speech-like” vocal delivery) and arias. Sometimes soloists represent individual characters in a drama; sometimes the content of the oratorio is not straightforwardly narrative or plot driven.

In Handel’s Messiah, there is a very loose narrative structure, but there are no characters or explicitly depicted scenes. The story unfolds entirely through the singing of Scripture around the foretelling of Christ, his life, and his resurrection. The first section begins with Isaiah 40:1-3; the tenor soloist offers the first words in the piece, singing, “Comfort ye, comfort ye my people, saith your God.”

Throughout the work, the soloists and choir voice the prophets Isaiah, Malachi, and Haggai; the angels in the Christmas story; John the Baptist; the psalmist; Paul; and the heavenly choir in Revelation. The “drama” is all in the music. There are soaring, emphatic choruses like “Hallelujah” and solemn moments as in the minor, fugal chorus of “And With His Stripes We Are Healed.”

In Part III, the chorus “Since by Man Came Death” begins with a hushed passage before a sudden, triumphal entry of the organ and exuberantly loud proclamation from the choir, “By man came also the resurrection of the dead!”

The music of each chorus and aria is written to convey and even instill a particular affect associated with the text being sung. The best-known passages from the work are triumphant and stirring, but the whole thing together guides the performers and audience through a range of emotions as the music and words narrate the story of Christ.

A few days after the premiere of Messiah, the reviewer for the Dublin Journal wrote:

Words are wanting to express the exquisite delight it afforded to the admiring, crowded audience. The sublime, the grand, and the tender, adapted to the most elevated, majestic, and moving words, conspired to transport and charm the ravished heart and ear. 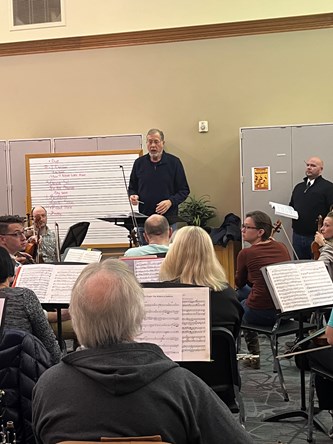 The Des Moines Symphony Orchestra has been hosting Messiah sing-alongs since 1978. Over the past two years, fans asked, “When will it come back? Could the orchestra do a streamed performance? Perhaps something socially distanced?” But it didn’t seem right to perform without the communal element of singing together.

“I didn’t think it was a good idea to have a whole bunch of strangers filling up the church space, singing near each other,” said Johnson.

During a frigid night in November, the ensemble gathered for their last weeknight rehearsal before the December 4 show. The musicians hurried through the dark parking lot, clutching coats, scores, and instruments, before making their way up the maze of stairs to the multipurpose room. Chad Sonka, the bass soloist for this year’s performance, drove 45 minutes to rehearse his selections with the orchestra.

Across the country, groups in Huntsville, Alabama; Pasadena, California; Gainesville, Georgia; Alexandria, Minnesota; and many others have also held evening rehearsals, making sure they have enough scores for the audience and hoping that the audience/choir will have at least a few tenors.

When Handel’s oratorios were rising in prominence in the 1740s, English writer Horace Walpole wrote, sarcastically, “The oratorios thrive abundantly—for my part, they give me an idea of heaven, where everybody is to sing whether they have voices or not.”

Walpole meant this to be an unkind comparison to Italian opera, which was more fashionable and boasted world-famous singers who weren’t interested in the more humble sacred oratorio. One reason for Handel’s increased interest in oratorios over operas later in his career was the fact that opera had become prohibitively expensive to produce.

The first time I read Walpole’s letter, I didn’t catch his joke. I thought he was sincere.

What Walpole meant as a jab about the simplicity and accessibility of oratorio seemed to me a high compliment. What a feat—to compose a beloved work that is accessible to performers of varied skill levels, contains moments of grandeur worthy of an opera hall, and relies on nothing but Scripture for its lyrical content.

But popular operas of the time were all about spectacle: elaborate scenery and costuming; narrative drama centered on romance, violence, and power struggle; and vocal writing to showcase the virtuosity of star singers. Sacred oratorios were a stripped-down genre with tamer subject matter, appropriate for the religious settings (often churches) in which they were performed.

The vocal and orchestral writing in Handel’s Messiah is restrained, compared to the operas of his peers, which in part may be why the tradition of sing-along or “scratch” Messiah performances is so enduring.

“The vocal parts are not impossible, but they are demanding enough,” said Johnson. “The choral parts are possible for amateurs. A professional chorus will sound more polished, but I don’t know if that necessarily makes it better.” 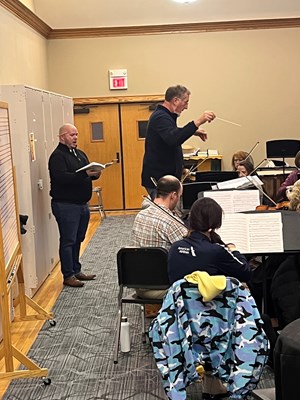 “There’s something about the community involvement,” Johnson told CT. “It’s such a wonderful opportunity to be in a room where everyone is making music. There’s nothing like that.”

If you like the idea of singing the story of Christ this Advent season, from foretelling to resurrection, consider seeing whether a community orchestra or choir near you is hosting a Messiah sing-along. No training or rehearsal necessary.

And you don’t have to sing. Listeners are welcome too. But you may find it difficult not to join in singing “Hallelujah” and especially “Worthy Is the Lamb,” the closing chorus:

Worthy is the Lamb that was slain, and hath redeemed us to God by His blood, to receive power, and riches, and wisdom, and strength, and honor, and glory, and blessing. …

Blessing and honor, glory and power, be unto Him, be unto Him that sitteth upon the throne, and unto the Lamb, for ever and ever. … Amen.