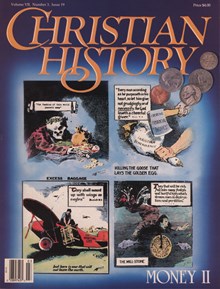 April 6, 1249: Muslims take King Louis IX of France prisoner during the seventh crusade, which was supposed to overcome the Muslim political center in Egypt. After showing bravery in the face of torture, he was allowed to buy his freedom for a huge sum in gold—and the city of Damietta (see issue 40: The Crusades and issue 74: Christians & Muslims).

April 6, 1528: Albrecht Durer, German painter, engraver, and designer of woodcuts, dies. Famous for his religious scenes, he may have been so influenced ...

More from April 6
Most Popular
Give Today
Christianity Today strengthens the church by richly communicating the breadth of the true, good, and beautiful gospel.
Learn more
© 2020 Christianity Today - a 501(c)(3) nonprofit organization.