Thomas Cranmer helped bring about the English Reformation, which in turn produced the Anglican church—a church that believes it combines the best of Protestantism and Catholicism. To discuss Cranmer’s legacy in the modern world, Christian History talked with Anglican Alister McGrath, professor of theology at Oxford University. He is author of many books, including The Intellectual Origins of the European Reformation (Blackwell, 1993).

Christian History: If Cranmer hadn’t lived, or if he had been martyred earlier, how might the English Reformation have been different?

Alister McGrath: It may have taken longer to achieve. Cranmer was a diplomat. He was prepared to give Henry what he wanted while he tried to accomplish his Reformation agenda. Sometimes he did things against his own will—like enforcing Henry’s Six Articles, especially the article requiring priestly celibacy. But Cranmer realized that if he didn’t go along, the Reformation wouldn’t continue.

In Henry’s reign, people in high positions tended to have short lives because Henry was determined to get his way. Cranmer managed to stay alive and made at least some headway for the Reformation.

Having survived Henry’s reign, Cranmer was in a position to push the Reformation forward much more speedily under Edward VI. That, in fact, is when he made his greatest contributions, the Book of Common Prayer and the Forty-Two Articles.

Considering he recanted several times, how much impact did his martyrdom have?

It excited a lot of reaction. Some scholars argue that the popular rise against Queen Mary was partly due to his dramatic recantation of his recantations, and of his holding forth his right hand into the fire.

Clearly the recantations were a problem. Cranmer was a fallible and ...

Next Article
Thomas Cranmer and the English Reformation: Recommended Resources

Thomas Cranmer and the English Reformation: ... 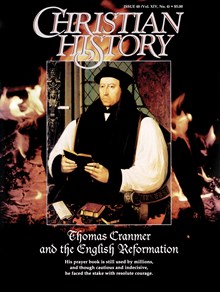