The New York Timeswrites about science and faith in a profile of the new National Institutes of Health head Francis Collins, author of The Language of God: 'A Scientist Presents Evidence for Belief. 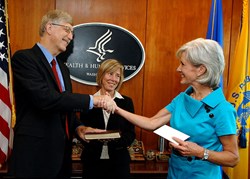 Collins resigned in August from from the BioLogos Foundation, the foundation he started as a way to reconcile faith and science. At the time, he noted concerns people had about his outspoken faith. Here's The Times' take:

First, there is the God issue. Dr. Collins believes in him. Passionately. And he preaches about his belief in churches and a best-selling book. For some presidential appointees, that might not be a problem, but many scientists view such outspoken religious commitment as a sign of mild dementia.

And the Wall Street Journalstrikes back:

It seems unlikely that scientists think religious commitment is literally a symptom of dementia. What the Times is really saying is that "many scientists"–how many is not specified–are prejudiced against religious people. It's one of the few prejudices the Times would discuss so glibly.

This is the second time that The New York Times' Gardiner Harris has outlined concerns about Collins's faith. In July, The Times published an op-ed from Sam Harris criticizing Collins's appointment.

Francis Collins is an accomplished scientist and a man who is sincere in his beliefs. And that is precisely what makes me so uncomfortable about his nomination. Must we really entrust the future of biomedical research in the United States to a man who sincerely believes that a scientific understanding of human nature is impossible?

Collins's appointment received both praise and criticism from conservative Christian groups after his appointment.