While the vast majority of LGBT adults view religious denominations as unfriendly toward them, only 6 percent report feeling unwelcome in a place of worship last year.

Here's what else a substantial survey by the Pew Research Center discovered about LGBT adults and religion:

Less than 1 in 3 LGBT adults report having ever felt unwelcome in a place of worship (but only 6 percent within the past year).

Most LGBT adults with a religious affiliation are Christians (53% Protestant, 26% Catholic).

Of LGBT adults with religious affiliations, 1 in 3 believe there is a conflict between their religious beliefs and their sexual orientation (vs. only 18 percent of the unaffiliated).

A majority of lesbians (56%) consider religion either very important or somewhat important in their life. This compares with 40 percent of bisexual adults and 39 percent of gay men.

Pew's survey of 1,200 LGBT adults also found that nearly 1 in 2 have no religious affiliation—more than double ... 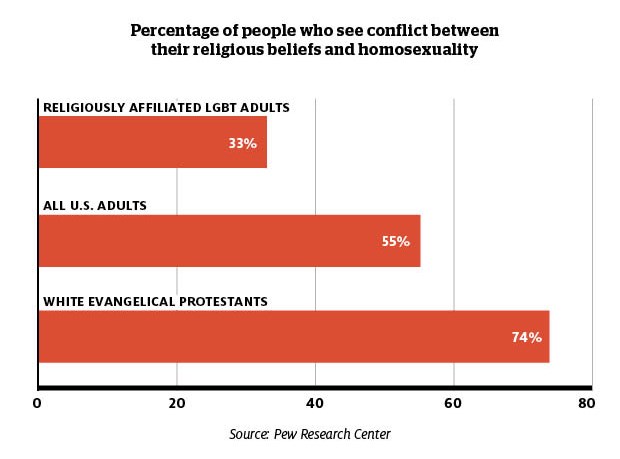