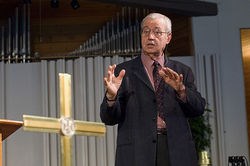 Dallas Willard, a prominent philosopher on a "quiet quest to subvert nominal Christianity" (according to a 2006 CT profile), died today after losing a battle with cancer. He was 77.

"For us, a great light has gone out," Foster said. "Heaven today is brighter."

According to Gary Moon, executive director of the Dallas Willard Center at Westmont College, Willard died early Wednesday morning, but "awakened to a full experience of the reality of the Kingdom of the Heavens he described so beautifully. Fittingly, his last two words were, "'Thank you.'"

Not long after news broke, InterVarsity Press associate publisher Andrew T. Le Peau wrote on his blog that the University of Southern California philosophy professor will be missed for his "strong, gentle wisdom, remembering him as someone who was soaked in the presence of Christ."

CT reported on Monday that Willard had just revealed a diagnosis of stage 4 cancer.

I'm sitting in the hospital room, watching over my dear friend, Dallas, reading and posting from The Divine Conspiracy on his FB and Twitter accounts and amazed by his words and his life. The love of God flows from Dallas into Becky into Larissa and a thousand generations will be blessed because of his love of God and his eternal life in Christ. I'm in the "splash zone" of everyone who is praying for him. Its hard to describe but the kingdom is aglow all around me.

The last excerpt Heatley posted from Willard's page before his death described how there is "no death" for true followers of Christ: "'Those who live in reliance upon the word and person of Jesus, and know by experience the reality of his kingdom, are always better off 'dead,' from the personal point of view.'"

Willard is well known to many Christians from his books on spiritual formation, including The Divine Conspiracy (which Christianity Today selected as Book of the Year in 1998), The Spirit of the Disciplines, Hearing God, and Renovation of the Heart.

Willard also recently spoke at the Veritas Forum on the topic of skepticism:

Willard's critical thinking has made him a provocative Christian thinker since the 1960s, when he abandoned his formal study of ministry to study philosophy. Since then, he has "devoted [himself] to reestablishing the exalted place moral reasoning once held in the academy."

CT profiled Willard in 2006, and interviewed him in 2005 on the difference between discipleship and spiritual formation. Most recently, Willard contributed to CT in March, when he argued for the importance of renewing the spiritual discipline of silence.

Willard's books always have been Resurrection-focused, calling Christians toward a life of discipline, Cornelius Plantinga Jr. said in an essay for CT in 2006. He wrote,

[Willard's] books all call out, in one way or another: Come on over. It's going to be okay to die first. You have to do it, and you can do it. Not even Jesus got a resurrection without a death, and he'll be at your side when you surrender your old life. Trust me on this. If you die with Jesus Christ, God will walk you out of your tomb into a life of incomparable joy and purpose inside his boundless and competent love.