(UPDATED) After death of 15-year-old Braxton Caner, the online Christian watchdog world assesses whether one of its own went too far.
Sarah Eekhoff Zylstra|August 7, 2014 01:28 PM 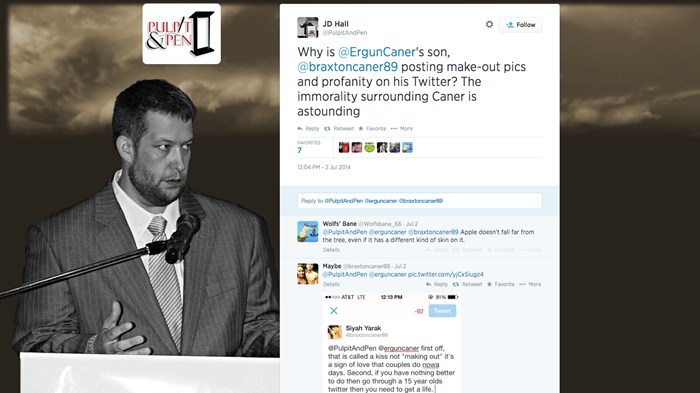 Update (Aug. 11): A "broken" J. D. Hall offered a lengthy confession to his Montana congregation on Sunday, expressing sorrow that his interaction with Braxton Caner was "adversarial rather than pastoral" and explaining his intention to "back away" from "fighting a war" for reform in the Southern Baptist Convention.

"In one sense, I am reaping what I sowed. When you live by the sword, you die by it,” said Hall, who posted the audio on his blog and gave a full transcript to Associated Baptist Press (ABP).

"I do realize that God never needed me to right every wrong in the denomination," said Hall, according to the ABP transcript. "In my zeal, there has been a disconnect between my theology and my methodology. I do know God is sovereign—and yet, I’ve relied too much on my own strength and not solely on the Spirit in my earnest desire to see justice prevail. That’s sin, even if the cause is right. I confess it.”

Hall's full statement can be read at ABP.

Caner, president of Brewton-Parker College, has faced scrutiny for making false statements in his personal testimony of conversion from Islam. Last month, Caner lost his legal attempt to remove critical videos from YouTube, and was ordered to pay $34,000 as a warning to people who “seek to suppress criticism” via frivolous lawsuits.

Last month, one of Caner's most vocal critics, Montana pastor J. D. Hall, extended his criticism to include Braxton's online behavior and how it reflected on Caner's parenting. The spokesman for Brewton-Parker College, Peter Lumpkins, responded that it was "time to stop social media abusers."

Last week, Caner tweeted a photo of himself baptizing a 6-year-old Braxton, along with a note: “No words. No sermon. No funny quotes. No answers. No note. Nothing but excruciating pain & the assurance that I’ll see him in Glory.”

Rick and Kay Warren, who lost their son Matthew to suicide in 2013, tweeted their sympathy. The couple has spurred evangelical efforts to address suicide and mental health—a need underscored last December when pastor Isaac Hunter, the son of prominent pastor Joel Hunter, took his own life.

“Sadly, I have already seen some using this event as a pretext for criticism—not of Ergun Caner, but of those who have sought honesty and integrity in his life,” he wrote. “This needs to stop, immediately. The issues surrounding Ergun Caner’s past can, and must, be set aside for the time being.”

Pastor Wade Burleson, an SBC critic who has also criticized Caner, assesses the burgeoning "blame game" on both sides.

Hall, who recently switched his watchdog focus from Louisiana College to Caner, had called out Braxton on Twitter in early July for “posting make-out pics and profanity” on the teenager's Twitter account (Braxton’s Twitter photo and name have since been changed). During the exchange, others chimed in about whether or not addressing Braxton directly was a good idea.

One commenter wrote, “Apple doesn’t fall far from the tree, even if it has a different kind of skin on it.” Another countered, “Was with you right up until you dragged the family in. An apology is in order, brother.”

A few days later, Hall posted an apology for drawing attention to the teen.

“I regret pointing people to the material or behavior exhibited on Caner’s son, Braxton’s Twitter account,” Hall wrote several weeks before Braxton died. “That was a distraction, and I should have contacted Caner about it.”

The Wartburg Watch, another watchdog blog which includes Caner among its targets, condemned Hall for his tweets to Braxton for “overstepping the boundaries of decency, love and good judgment.”

Fox News's Todd Starnes called the criticism of Braxton “theological thuggery.” FBC Jax Watchdog, another watchdog blog which "publicly rebuked Hall on Twitter for being a 'bully' and a 'religious jerk,'" responded that blaming Caner's critics for Braxton's suicide was incorrect and unhelpful.

Alan Farhner, a former pastor who blogs at Traditores.org, explained why he finds many criticisms of Caner persuasive but calls out those who “are mistakenly believing that somehow Ergun’s sins okay the way others are behaving badly toward him.”

“I am more concerned about the behavior of Ergun’s detractors than Ergun himself,” he wrote.

One critic, at least, will be taking a break.

“I, for one, will not pursue the issues relating to Caner’s past claims until after a meaningful period of time has passed, and they become relevant to his future actions,” White wrote. “I call upon all others to likewise give the Caner family time to grieve and deal with this tragedy. I include everyone in this request. Leave all matters of speculation, finger-pointing, etc., to the side.”

CT's previous reporting on Ergun Caner includes his removal as dean of Liberty University's seminary, the support he received from his publisher, and the lawsuit he filed against YouTube. CT also noted why he was chosen to be president at Brewton-Parker College (because he was controversial) and why we’re tempted to embellish conversion stories.

Suicide of Pastor's Kid Prompts (Some) ...