'Innocence of Muslims,' blamed for Benghazi and nixing blasphemy reform in Pakistan, taken down by a controversial copyright claim.
Kate Tracy|February 27, 2014 12:01 PM 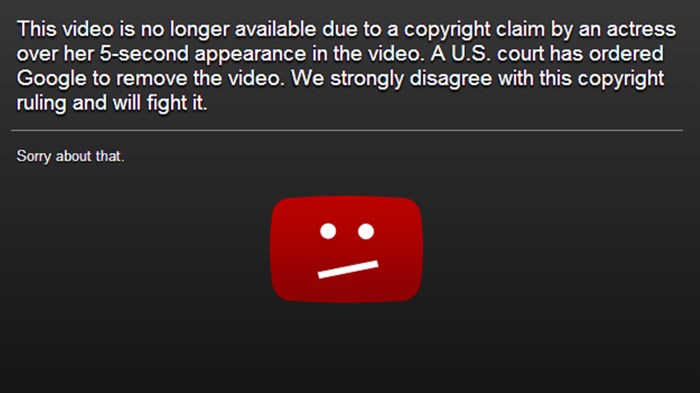 "Innocence of Muslims" had an outsized impact beyond being a brief and bad film.

It sparked the deaths of dozens of people in at least 10 countries. It was initially blamed for the Benghazi embassy scandal. It even quashed a promising debate on blasphemy reform in Pakistan, and sparked debate on how Christian broadcasters should best evangelize Muslims in the Arab world.

And now, it is finally no longer on YouTube—thanks to a controversial copyright claim.

A federal appeals court has ordered Google to remove the 2012 anti-Islam video from YouTube and other platforms, ruling that the film infringed an actress's copyright.

The Ninth Circuit said the actress Cindy Lee Garcia never consented to being in the film and copyright law protect her performance, reports the Los Angeles Times.

"While answering a casting call for a low-budget amateur film doesn't often lead to stardom, it also rarely turns an aspiring actress into the subject of a fatwa," Chief Judge Alex Kozinski said.

According to the Ninth Circuit decision:

[A] writer and producer, Mark Basseley Youssef — who also goes by the names Nakoula Basseley Nakoula and Sam Bacile — cast [Cindy] Garcia in a minor role. Garcia was given the four pages of the script in which her character appeared and paid approximately $500 for three and a half days of filming. "Desert Warrior" [the title of the film as Youssef described it to Garcia] never materialized. Instead, Garcia's scene was used in an anti-Islamic film titled "Innocence of Muslims." Garcia first saw "Innocence of Muslims" after it was uploaded to YouTube.com and she discovered that her brief performance had been partially dubbed over so that she appeared to be asking, "Is your Mohammed a child molester?"

These, of course, are fighting words to many faithful Muslims and, after the film aired on Egyptian television, there were protests that generated worldwide news coverage. An Egyptian cleric issued a fatwa, calling for the killing of everyone involved with the film, and Garcia soon began receiving death threats. She responded by taking a number of security precautions and asking that Google remove the video from YouTube.

The film caused worldwide dissent and violence among Muslims who viewed it as blasphemy. CT reported how the internet video quashed hopes of reforming blasphemy laws in Pakistan following Rimsha Masih's case. In addition, Coptic leaders in Egypt condemned the film for sparking the violent protests that killed 28 people in 10 countries. It even raised the stakes for Christian broadcasters in the Arab world after a Cairo court sentenced the filmmaker and six others to death.

Instead, the filmmaker spent time in a U.S. prison and was released last fall. Nakoula Basseley Nakoula plans more films. "I want the world to see the truth," he toldThe Daily Caller.

Meanwhile, the Associated Press sums up how the case may negatively affect Google:

The ruling represents a nettlesome issue if allowed to stand. The company fears that bit players and extras appearing in popular clips will now be emboldened to send takedown notices to YouTube unless settlements can be reached with the filmmakers.

Volokh thinks Google be able to fight the order by raising the issue of fair use at a trial court to decide whether the preliminary injunction should remain permanent.

"The entire video ought to remain available to those who want to get a full understanding of the controversy, and the fair use doctrine ought to be a mechanism for doing that," he wrote for the Post.

CT previously reported how "Innocence of Muslims" sparked debate among Christian broadcasters over whether or not to evangelize Muslims by directly criticizing the Islamic faith.