1 of 8
Thinking to Change Lives
Research

Social hostilities involving religion soared worldwide in 2012, with nearly 3 out of 4 of the world's people (74%) living in countries with high levels. The surge is stark, given that in 2011 only half of the global population (52%) lived in such countries, while the worldwide level of government restrictions on religion remained largely the same between the two years.

The latest global findings from the Pew Research Center, released two days before Religious Freedom Day in the United States, show that overall restrictions on religion in nearly 200 countries and territories have reached a six-year high, and Christians are harassed in more countries than any other religious group (though Muslims are a close second).

[Editor's note: For charts of how Pew's January 2014 report compares to the 2014 World Watch List (which assesses the world's top 50 persecutors of Christians) as well the previous findings of both groups, see bottom of this page. Last week, CT examined the "effective anger" over the top 50 countries where it's hardest to be a Christian.]

The report, "Religious Hostilities Reach Six-Year High," is the fifth in a series of reports from the Pew-Templeton Global Religious Futures project. Pew's first report, released in 2009, was groundbreaking.

In 2007, 1 in 5 of the world's countries had significant government restrictions on religion, according to Pew's calculations. The same percentage—20 percent—had significant social hostilities involving religion. In 2012, both measures increased to about 1 in 3 of the world's countries. Europe saw the highest increase of government restrictions in 2012, while the Americas was the only region where social hostilities did not increase.

Overall restrictions on religion are now "high" or "very high" in 43 percent of the 198 countries and territories surveyed by Pew Research. Since many of these countries have large populations, they accounted for 76 percent of the world's population in 2012.

Only 4 percent of the world's population lives where restrictions on religion are low. 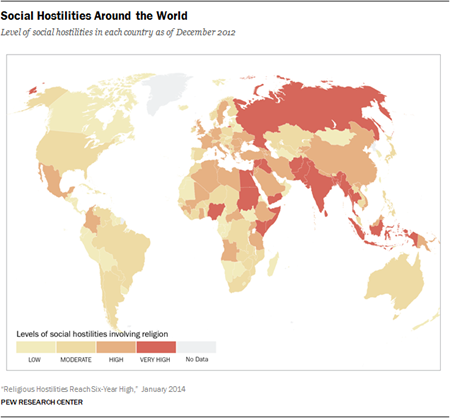 Government restrictions in 2012 remained roughly the same as in 2011, now high or very high in 29 percent of countries (and accounting for two-thirds of the world's population). However, governmental interference with worship was reported in 74 percent of the world's countries (up from 57% in 2007), and governmental restrictions on public preaching were reported in 38 percent (up from 28% in 2007). 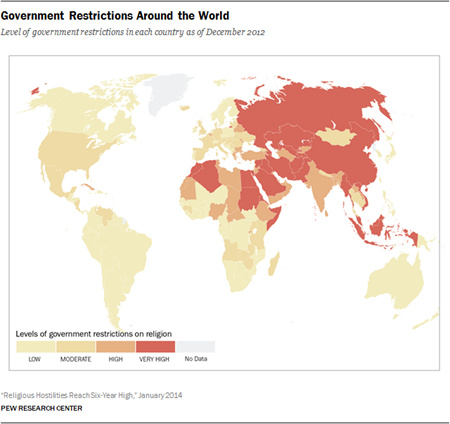 Out of the world's 25 most populous countries, the greatest social and governmental constraints on religion in 2012 were measured in Egypt, Indonesia, Russia, Pakistan, and Myanmar. Myanmar reached the "very high" level with regard to social hostilities for the first time since Pew began its study in mid-2006. North Korea was not ranked due to limited information, although the report states, "The primary sources used in this study indicate that North Korea's government is among the most repressive in the world, including toward religion."

By contrast, among the top 25 most populous nations, Brazil, the Philippines, Japan, South Africa, and the Democratic Republic of the Congo had the least restrictions and hostilities involving religion.

No countries dropped off the list of "very high" social hostilities between 2011 and 2012. New countries in this category were: Syria, Lebanon, Sri Lanka, Bangladesh, Thailand, and Myanmar.

On the "very high" list of governmental restrictions, new countries in 2012 were: Azerbaijan, Tajikistan, Morocco, Iraq and Kazakhstan. Yemen was the only country to drop off the list from 2011.

The harassment of Christians reached its peak in 2010, with harassment reported in 111 countries. Between June 2006 and December 2012, Christians were harassed in more countries (151) than any other religious group. (For comparison: Muslims (135 countries), Jews (95 countries).) 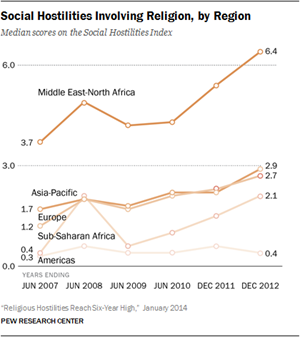 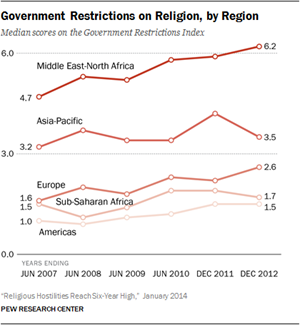 Libya, Tunisia, Syria, and Lebanon had the greatest increases in social hostilities in the Middle East-North Africa Region, where hostilities increased in 15 of 20 countries. In Asia, China's score rose to the "high" level for the first time in the study.

In the Americas, social hostilities remained low with the exception of Mexico, where they went from "moderate" to "high." In recent years, drug-related violence has disrupted religious life in Mexico, debates have occurred about the right to public religious events, and Protestants have been expelled from their homes.

Government restrictions increased in Middle East-North Africa and Europe, decreased in Asia-Pacific and sub-Saharan Africa, and remained steady in the Americas.

Here's how Pew defines its categories:

The Government Restrictions Index (GRI) measures government laws, policies and actions that restrict religious beliefs and practices. The GRI is comprised of 20 measures of restrictions, including efforts by governments to ban particular faiths, prohibit conversions, limit preaching or give preferential treatment to one or more religious groups.

The Social Hostilities Index (SHI) measures acts of religious hostility by private individuals, organizations or groups in society. This includes religion-related armed conflict or terrorism, mob or sectarian violence, harassment over attire for religious reasons or other religion- related intimation or abuse. The SHI includes 13 measures of social hostilities.

Nearly all countries with either "very high" government restrictions or "very high" social hostilities also appeared on the recently released World Watch List of the 50 nations with the greatest persecution of Christians.

CT reported on the Pew reports in 2011 and 2009. CT also noted how the State Department and USCIRF disagree on which countries deserve censure for mistreating religious minorities.

In 2010, CT compared the findings by World Watch List and Pew Research. That graphic is below, as well as an updated graphic comparing the Pew and WWL findings from 2014. 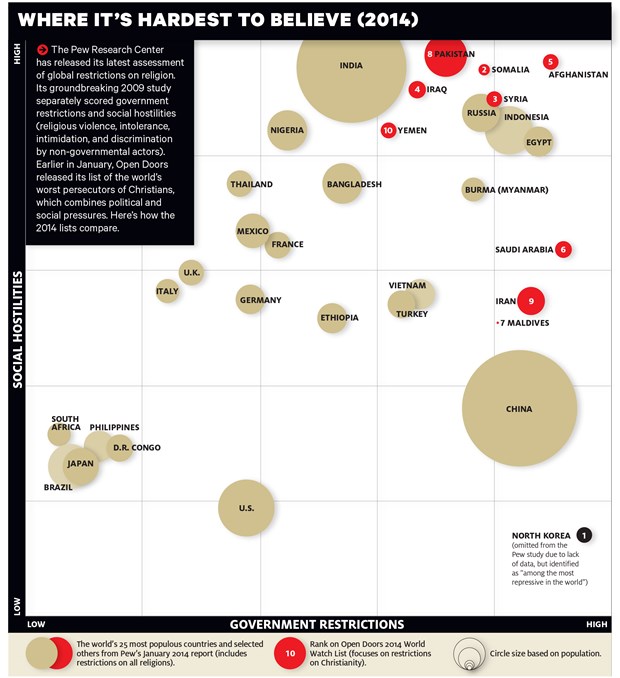 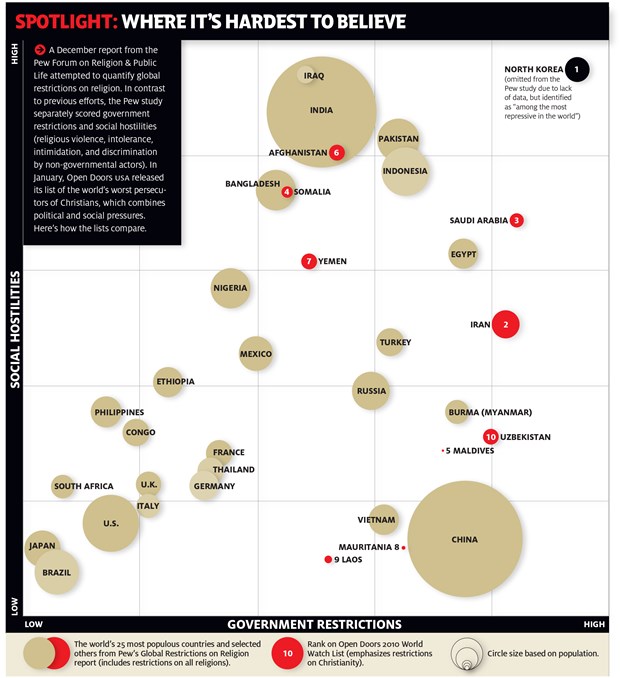