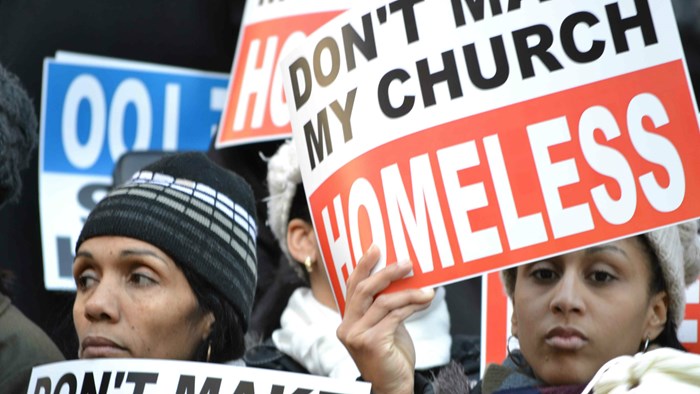 New York City's ban on religious groups renting public schools for worship will remain in place, after the US Supreme Court declined this morning to hear a church's appeal of a lower court's decision.

Today’s move marks the second time in the past four years that the nation's highest court has declined to intervene in the dispute between NYC churches and schools.

For more than two decades, the Bronx Household of Faith has challenged an NYC policy that bans worship services in public school buildings.

Last April, the Second Circuit Court of Appeals ruled that the ban was constitutional.

About 80 churches were renting space in schools in recent years, according to The New York Times (NYT), thanks to several previous injunctions.

The Bronx Household of Faith has met in its own building since 2014, but had planned to rent space for Easter services. City officials say they have no immediate plans to end church rentals already in place.

Attorneys for Bronx Household insist that the ban on rentals for worship is unfair to churches.

“Any community group can meet in New York City’s school buildings during non-school hours for any purpose—except for religious groups meeting to worship God. This policy is clearly nothing more than religious segregation—the kind of segregation the mayor has said he opposes,” said Jordan Lorence, senior counsel with Alliance Defending Freedom, which has represented Bronx Household for 20 years in its legal battle against the city’s policy.

“If the city chooses to use this occasion to evict the churches, it will be shooting itself in the foot.”

Opponents of the ban say they will now turn their efforts to asking New York Mayor Bill de Blasio to change the policy. While de Blasio promised churches relief from the public school ban during his 2013 mayoral campaign, in March his administration filed a legal brief opposing Bronx Household's appeal, arguing that the ban "does not involve any government-imposed prohibition, restraint, or burden on religious exercise."

Wile Norvell, deputy press secretary for the mayor's office, said de Blasio is commited to "ensuring that religious organizations are able to use space in City schools on the same terms provided to other groups."

"Now that litigation has concluded," Norvell said in a statement, "the City will develop rules of the road that respect the rights of both religious groups and non-participants. While we review and revise the rules, groups currently permitted to use schools for worship will continue to be able to worship on school premises under DOE guidelines."

Earlier this month, the NYT chronicled how the “spiritual” but not religious de Blasio had emerged as a surprising champion of religion. It also noted that the mayor intended to uphold his campaign promise vowing to reverse the highly contested city policy. (Religious voters played a key role in de Blasio’s electoral success, helping him trounce his opposition with 73 percent of the vote.)

Despite instituting policies friendly to religion—such as giving Muslim holy days off for school and allowing pre-K students a midday time off to pray—de Blasio has yet to politically counter the public schools’ ban.

“We cannot ignore the immense contribution to society that religious organizations and institutions have made throughout our nation’s history and continue to make across the US today,” said NYC council member Fernando Cabrera, who represents several Bronx neighborhoods. “Churches meeting in New York City public schools for worship services have fed the poor and needy, assisted in rehabilitating drug addicts and gang members, helped rebuild marriages and families, and provided for the disabled.”

A Journey Through NYC Religions partnered with Colgate University to survey NYC passersby if they thought worship in public schools was a violation of church/state separation. Two-thirds said it was not.

LifeWay Research surveyed NYC residents and Americans at large over the issue in 2012. The results: Half of NYC residents favored churches renting schools, as did two-thirds of Americans overall.

CT has reported on the legal wrangling over NYC public school space, including protests of New York pastors (one started a hunger strike). Tim Keller called the attempt to oust churches "unwise." CT also editorialized on the issue, and Ed Stetzer explained on his CT blog three reasons why schools should still rent to churches. He also explores today's decision.