Fewer pastors are politically engaged this election; fewer still are speaking for Trump from the pulpit.
Kate Shellnutt|August 8, 2016 09:00 AM 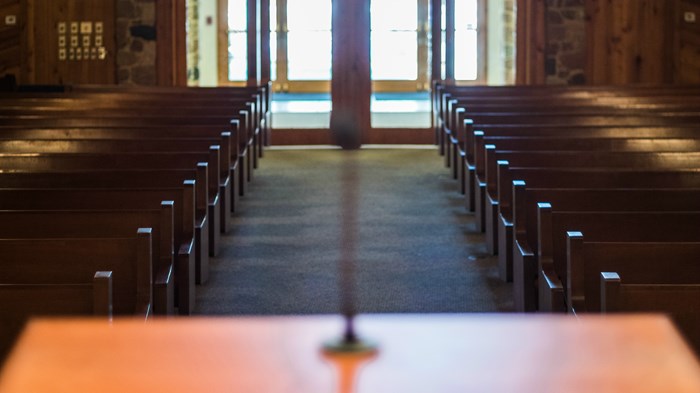 The candidate behind the biggest Republican push to allow pastors to back politicians from the pulpit has received fewer sermon endorsements than his presidential opponent, who favors the current ban.

According to a new Pew Research survey, 1 percent of churchgoers said their pastor has spoken positively of Donald Trump, compared to 6 percent who heard praise for Hillary Clinton.

Trump was also the subject of more pastoral criticism: 7 percent said their leaders spoke against Trump and 4 percent against Clinton.

Trump’s religious freedom platform centers around his promise to get rid of the Johnson Amendment, which bars churches and other tax-exempt non-profits from endorsing or disavowing candidates, but still allows them to speak generally about political issues.

“After 30 years of the so-called conservative leaders who have been elected by evangelicals, none of them thought to advocate for the repeal of the Johnson amendment, giving evangelical leaders political free speech,” Jerry Falwell Jr., Liberty University president and early Trump endorser, toldTime magazine. “[Trump] thinks it is going to be a revolution in the Christian world.”

Even with the current the ban, which has been part of the tax code since 1954, about 1 in 10 recent churchgoers say their leaders discuss the candidates, Pew found. Additionally, more than 6 in 10 (64%) say they’ve heard clergy speak out about political issues. The most common issues: religious freedom (40%), homosexuality (39%), and abortion (29%). 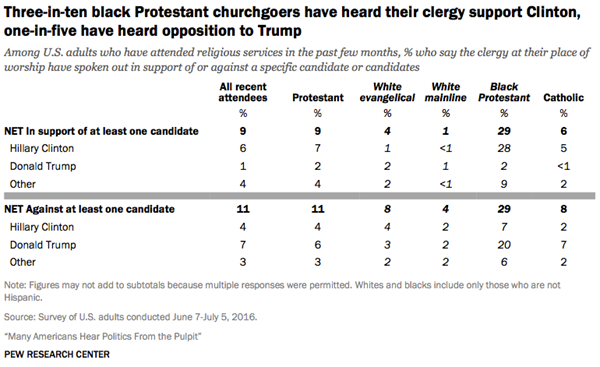 That’s less pastor engagement than during the mid-term elections in 2014, according to a June survey of 600 theologically conservative Protestant pastors by Barna Group for the American Culture & Faith Institute. The decline in political activity proved true for every category, from preaching a sermon on a public policy issue (1% did so in 2016, down from 37% in 2014) to distributing voter guides (36%, down from 45%) to speaking to the congregation about the importance of voting (62%, down from 78%).

Over the past eight years, the Alliance Defending Freedom (ADF) has rallied more than 2,000 pastors to violate the Johnson Amendment by explicitly endorsing candidates on “Pulpit Freedom Sunday,” held annually in October. Lifeway Research found in 2012 that 9 in 10 Protestant pastors believe that the government shouldn't prohibit pastors from preaching politics, but that 9 in 10 also believe pastors shouldn’t do it.

The Republican Party platform now references its opposition, saying, “Republicans believe the federal government, specifically the IRS, is constitutionally prohibited from policing or censoring speech based on religious convictions or beliefs, and therefore we urge the repeal of the Johnson Amendment.”

Evangelicals who want to repeal the amendment worry about the government restricting what can be preached in a house of worship. As the ADF writes, “A pastor’s pulpit should be accountable to God alone, and the future of religious freedom in America depends on it.”

Since pastors are free to make political endorsements as individual citizens, just not in their official capacities as leaders of the church, supporters of the Johnson Amendment contend that rather than restricting political speech, the rules protect nonprofits from lobbying interests.

“It is not difficult to imagine what would happen if we suddenly allowed churches to engage in political activity and retain their current tax-exempt status,” Arizona State University Law professor Adam Chodorow wrote for Slate. “Political donors in search of a deduction would find willing churches and use them to fund political activity.”