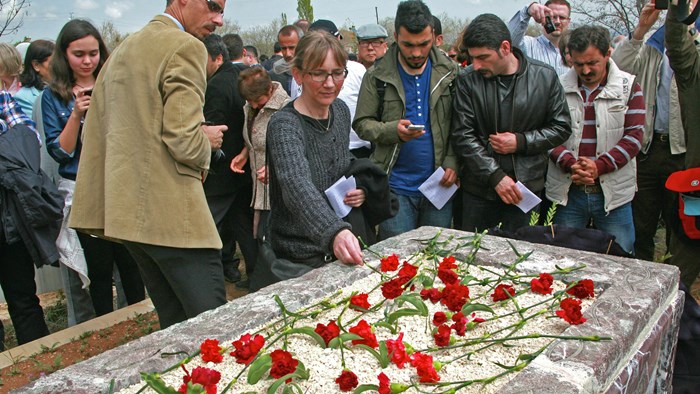 “They need to be in jail right now,” Talas said. “This process is unjust. There’s no justice for Christians in this country. This is the proof of that. They are just hiding behind the laws. These people are killers.”

In a press release issued by the Association of Protestant Churches in Turkey, chairman and pastor Ihsan Ozbek echoed Talas’s dismay that the perpetrators were free despite being handed life sentences.

“Of course the legal process will continue as the case passes to the Regional Administrative Court, and then will go to the Supreme Court. This process can take years, and the killers of our brothers brutally murdered can move around freely for years to come,” Ozbek said. “The continuous postponement of the punishment they deserve severely wounds confidence in justice.”

On April 18, 2007, in the office of the Zirve Publishing House in Malatya in southeastern Turkey, Gurler, Ozdemir, Yildirim, Ceker, and Gunaydin killed Ugur Yüksel, 32, and Necati Aydin, 36, both Turkish converts from Islam, as well as Tilmann Geske, 45, a German national. The five Muslim, Turkish nationalists bound the three men, interrogated them about their Christian activities, mutilated them, and then slit their throats, according to court evidence and testimony.

Police arrested the five men almost immediately after the crime was reported. Gunaydin attempted to escape police by jumping out of an upstairs window of the office and suffered serious injuries. Several others were later arrested in connection with the crime, including Turna Işıklı, Gunaydin’s girlfriend.

According to several Christians close to those killed, one or more of those arrested cultivated relationships with the victims. Several Christians said Gunaydin went so far as to pose as being interested in the Christian faith or even becoming a Christian to get as close as possible to the three men.

When they were arrested, at least one of the suspects had a note claiming they committed the slaying for their country.

“They are trying to take our country away, take our religion away,” the note read in part.

Gunaydin today showed no remorse. According to Ozbek, Gunaydin told the court regarding the killing, “I am thankful that I did not shame my country or cause any embarrassment.”

Today’s hearing was the 115th hearing in the trial. The number of hearings, and the fact that the case took so long to prosecute, was the source of a great deal of anguish for Turkey’s Christians.

In 2008, the court held its first hearing in the case, but the proceedings were problematic and difficult from the start. The judges and prosecutors were changed more than once, causing significant delays, and subpoenaed witnesses simply refused to show up in court to testify without legitimate reason and without being punished later for contempt of court.

Most significant in delays was the attempt to explore links between the killings and a larger alleged attempt by the Turkish military to subvert the Justice and Development Party-led government. There was much speculation that arrests of lawyers and judges in the wake of a coup attempt in July would further delay proceedings.

From the beginning of the trial, Gunaydin was portrayed as the leader of the attack, with links to nationalist groups and to nationalist writer Varol Bulent Aral. According to testimony by Gunaydin, Aral urged the killing of the Christians and said he would have support of the state, meaning hardcore nationalists within the military.

In 2009, the murder case was linked to the Ergenekon file, concerning a suspected cabal plotting against the government. As a result of this, a host of new witnesses were called into court, including a colonel in the gendarmerie and three army officers.

Ozbek referred to the efforts to investigate those connections in his press statement.

Especially galling to families of the victims was that the five suspects on March 10, 2014, were released on bail under a new reform law that reduced the allowable period of pretrial detention from 10 years to 5 years. Under public pressure, authorities required them to wear electronic monitoring devices, a practice that continues after the conviction. But the release has caused extreme distress among the families and friends of the victims.

The suspects had in the past threatened family members of the victims. At one point after the release in March, Talas’s wife suffered a nervous breakdown due to stress and was hospitalized, Talas told Morning Star News. He said the continued freedom of the now convicted killers leaves him “very concerned.”

Anadolu Agency, the official state-sponsored Turkish news agency, said the court acquitted 16 suspects that had been arrested in the case. One army officer, retired Col. Mehmet Ulger, was sentenced to 13 years and nine months in jail for “violation of confidentiality of communication and forgery of official documents.” Ulger were detained in March 2011 as a result of the murder case being joined with the investigation of the Ergenekon coup plot trial.

Editor’s note: CT ran an editorial on the Malatya martyrs in 2007, and profiled Turkey’s Christian population in a 2008 cover story. CT has previously reported on how Aydin’s family is rebuilding its life, and reviewed a 2010 documentary remembering the martyrs’ lives. CT also investigated claims that Turkish Mission sent a financial appeal with false information about the martyrs.