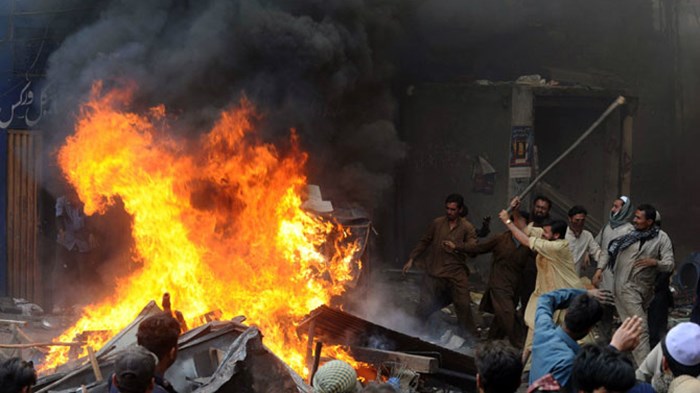 An anti-terrorism court in Lahore has sentenced 42 Christians for rioting after two churches in Pakistan’s largest Christian neighborhood were bombed in 2015, reports Fides, the news agency of the Vatican.

The ruling comes less than a month after the court acquitted more than 100 Muslims for rampaging through another one of Lahore’s major Christian communities in 2013 over one man’s alleged blasphemy.

The 42 Christians were roughly half of those accused of murder and terrorism after two Muslim men suspected of bombing Sunday services in Youhanabad were killed. The National Commission for Justice and Peace (NCJP), an initiative of Pakistan’s Catholic bishops, told Fides that they were disappointed that the church attackers have not been punished.

Also left unpunished were the approximately 112 Muslims who were arrested for ransacking, looting, and setting fire to more than 100 homes in Joseph Colony in 2013. The court found them innocent despite eyewitnesses and videos of the attack, reported World Watch Monitor.

“The evidence was not enough to prove the crime,” said judge Chaudhry Muhammad Azam.

“Basically, this means that, despite video footage, documents, and pictures of thousands rampaging through Christian properties, the court has not found anyone guilty,” he said. “So mobs are free to do whatever they want.”

The two cases from Lahore, the second-largest city in Pakistan, stand in stark contrast to the promise of Pakistan’s prime minister last month that the country will soon “better the lives of minority groups.”

Also belying his announcement was the Sindh governor’s rejection of a bill which would have prohibited forced religious conversions; the lack of movement on steps demanded by the former chief justice of the Supreme Court of Pakistan for the protection of religious minorities; and the fact that while the 12 legislative seats reserved for women in the National Assembly was increased to 60 in 2012, the seats reserved for religious minorities remains only 10, according to World Watch Monitor.

Thus, a recently proposed national law that makes lynching and forced conversions illegal hasn’t been greeted with a lot of optimism, even though it has been passed by the National Assembly and awaits the prime minister’s signature.

“There are already laws that could be implemented in cases of mob violence, but they are rarely enacted, and when done so fail due to frightened witnesses absenting themselves from court,” stated Wilson Chowdhry, chairman of the British Pakistani Christian Association. “It is the implementation of the laws that is the crux of the problem, with a lack of desire from police due to a rife bribery culture and animosity towards ‘ritually impure’ Christians.”

In other words, any progress that seems to be made on paper doesn’t make it to the pavement. Police stand by while mobs rampage. Attorneys for Christians accused of blasphemy face hostile crowds of hundreds outside the courtroom. Politicians—even those at high levels—who criticize the blasphemy laws have been assassinated. And extremists didn’t wait for court dates to kill at least 65 of those accused of blasphemy—or their lawyers or judges—since 1990.

Indeed, the same day the Muslim suspects in the Joseph Colony riot were acquitted, a 70-year-old Christian was jailed after being accused of writing two letters that included derogatory remarks about the Qur‘an and Muhammad. His entire family was taken into custody.

The charges couldn’t be more serious. Asia Bibi has been on death row for seven years for allegedly asking several Muslim women what Muhammad did for them. Sawan Masih, whose accuser sparked the Lahore attacks, has also been sentenced to death.

Masih maintains his innocence, saying the accusation was a way for the Muslim man to seize his land, a common motivation for blasphemy accusations in Pakistan.

Aware that blasphemy laws are often used to settle land disputes or personal feuds, Pakistan’s government recently attempted to take a look at its blasphemy laws. The Senate’s Committee on Human Rights recommended offering bail to those accused of blasphemy and prohibiting police officers with lower ranks than superintendents from investigating the cases.

But Pakistan’s Minister for Religious Affairs, Sardar Muhammad Yousuf, denied that any changes would be made.

“We have no plan to diversify or modify the blasphemy law,” he stated. “The present democratic government is fully determined and affirms to implement the existing law in true spirit. It has no concoction to make any change in the blasphemy law.”

In fact, Interior Minister Chaundhry Nisar Ali Khan went so far as to say religious minorities are not being unfairly affected by the blasphemy laws, since about three-quarters of the charges are brought against Muslims.

“His contrived results have failed to recognize that Christians in recent years have become the No. 1 target of blasphemy allegations,” Chowdhry stated. “It is our belief that a large proportion of the 26 percent of blasphemy convictions listed against minorities will have sentenced Christians, yet we contribute only 1.6 percent of the entire national population. … If this is how the rest of the government feels, then I believe hope for Christians in Pakistan has reached its lowest ebb.”

Open Doors ranked Pakistan No. 4 on its 2017 list of the worst places to live as a Christian. More than four out of every five Christians in Pakistan work as domestic laborers, cleaners, and street sweepers.

Pakistan Convicts 42 Christians of Terrorism After ...