Among regular attenders of religious services: 2 in 3 go because of their kids, Catholics half as likely as Protestants to value sermons, and 1 in 5 don’t usually feel God’s presence.
Jeremy Weber|August 1, 2018 09:45 AM 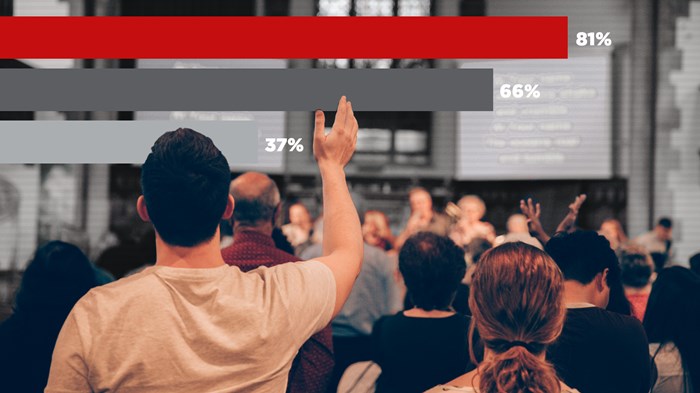 About 2 out of 3 American adults who regularly attend church or other religious services say they go for their kids, for personal comfort, or to become a better person.

Meanwhile, Catholic attenders are half as likely as Protestant attenders to say sermons are of enough value to be very important to their attendance.

These are among the results of a new Pew Research Center study, released today, examining 10 reasons why people might attend religious services and 8 reasons why they might not.

Among US adults who do attend church or other religious services regularly (defined by Pew as attending monthly or more), 7 in 10 say a very important reason they attend is so their children will have a moral foundation (69%). Similar shares attend to become a better person (68%) or for comfort in times of trouble or sorrow (66%).

The most common reason for attendance is to become closer to God (81%), which far and away is also cited as the single most important reason (61%) with every other reason cited by less than a tenth of respondents.

Pew also examined the demographics of regular worshipers. Among the findings:

Pew found that while becoming “closer to God” is the most important reason given for attending church or other religious services regularly, concern for comfort or the character of children or one’s self also rank high.

“Smaller majorities say that valuable sermons and being part of “a community of faith” are very important reasons for their regular religious attendance,” noted Pew researchers. “Far fewer cite their family’s religious traditions (37%) or a feeling of religious obligation (31%) as reasons for their steady religious attendance, while even fewer say socializing and meeting new people (19%) or pleasing their spouse or family (16%) are key reasons they attend church regularly.” 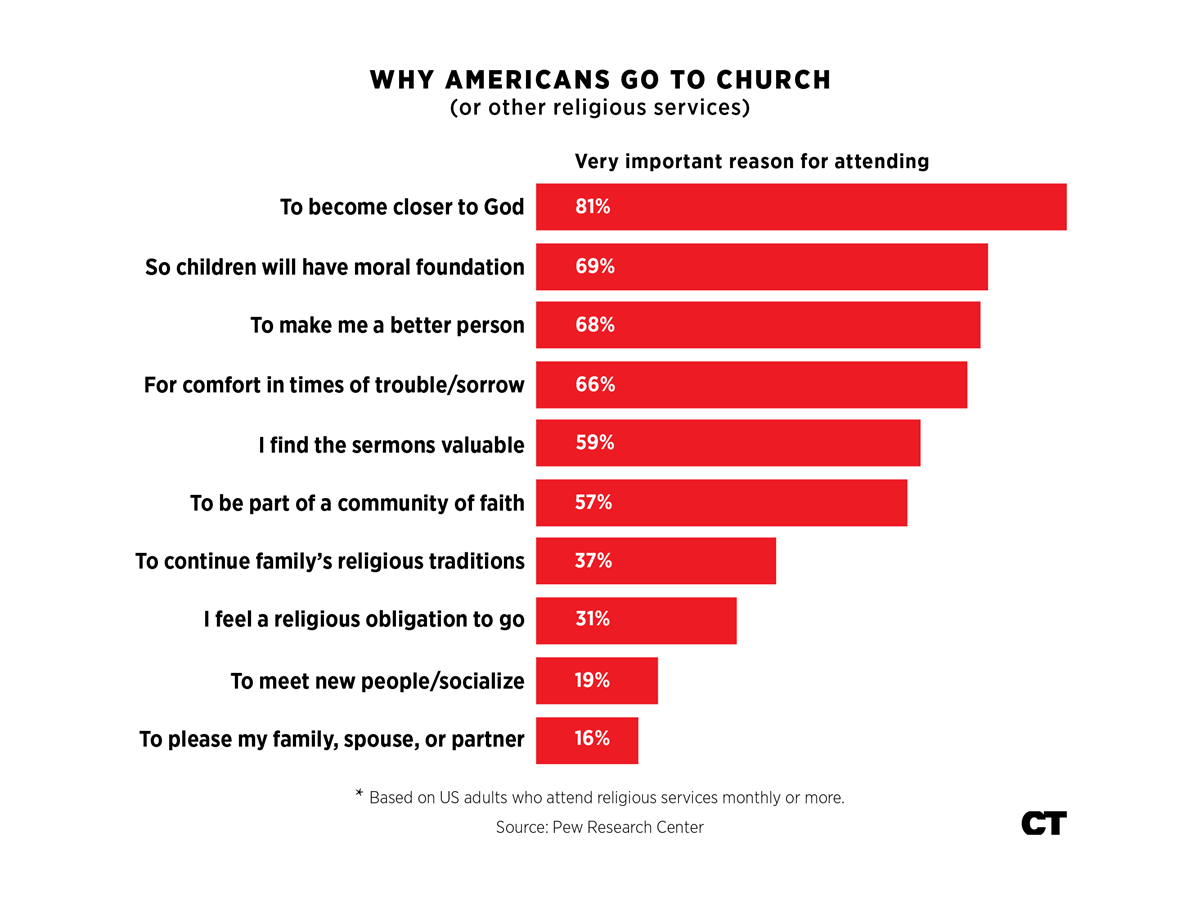 When it comes to sermons, which Gallup recently found was a top draw, Pew found that “Catholics who attend Mass regularly are significantly less likely than other Christian churchgoers to say that the sermons they hear are what keeps them coming back.” Among regular attenders, evangelicals (76%) and Protestants overall (71%) were twice as likely as Catholics (36%) to say “valuable sermons are a very important reason.” 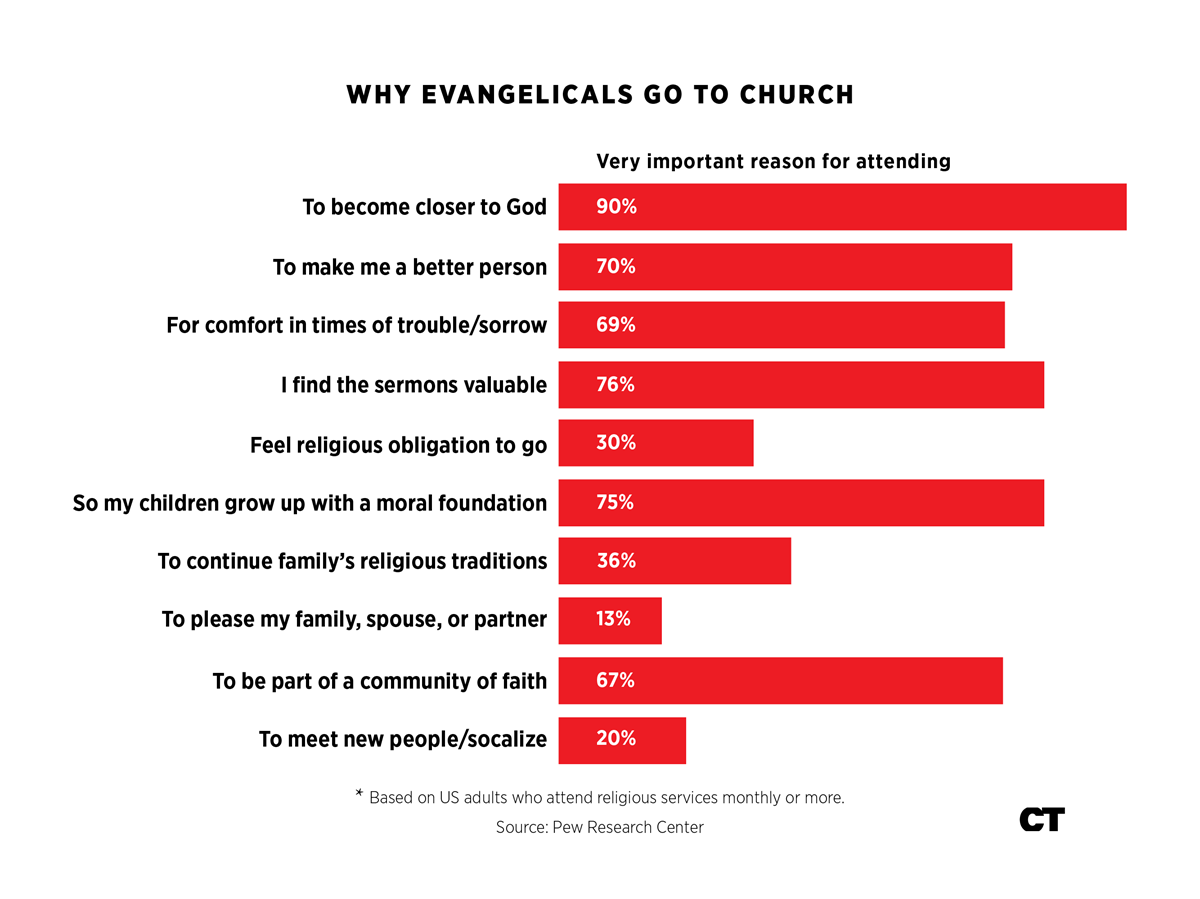 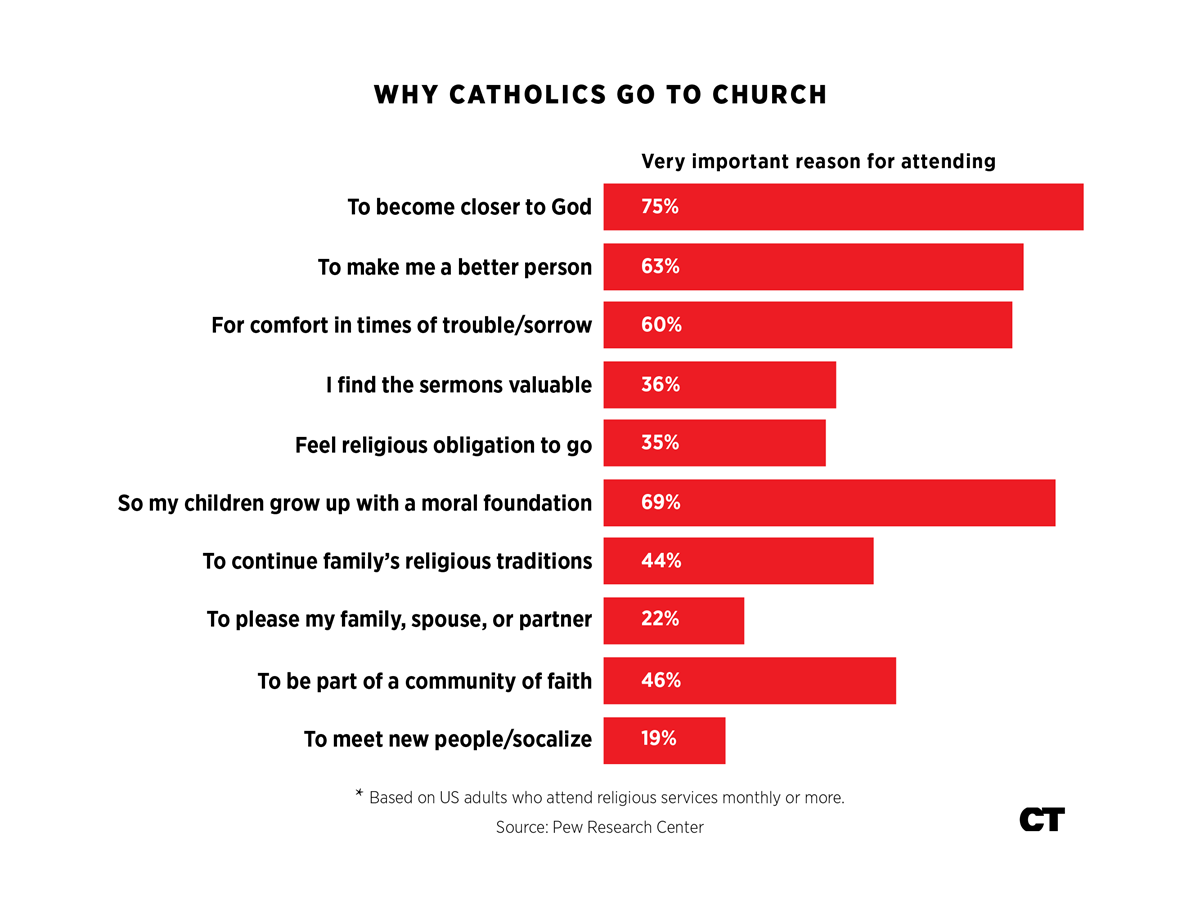 Why They Don’t Attend:

“The things that keep people away from religious services are more complicated,” wrote Pew researchers.

Only 1 in 3 American adults who do not attend religious services (defined by Pew as attending a few times a year or less) say a very important reason is because they are not believers (28%). More say they practice their faith in other ways (37%) or they haven’t found a church or other house of worship that they like (23%). About 1 in 5 say they don’t like the sermons (18%) or cite logistical problems (22%). 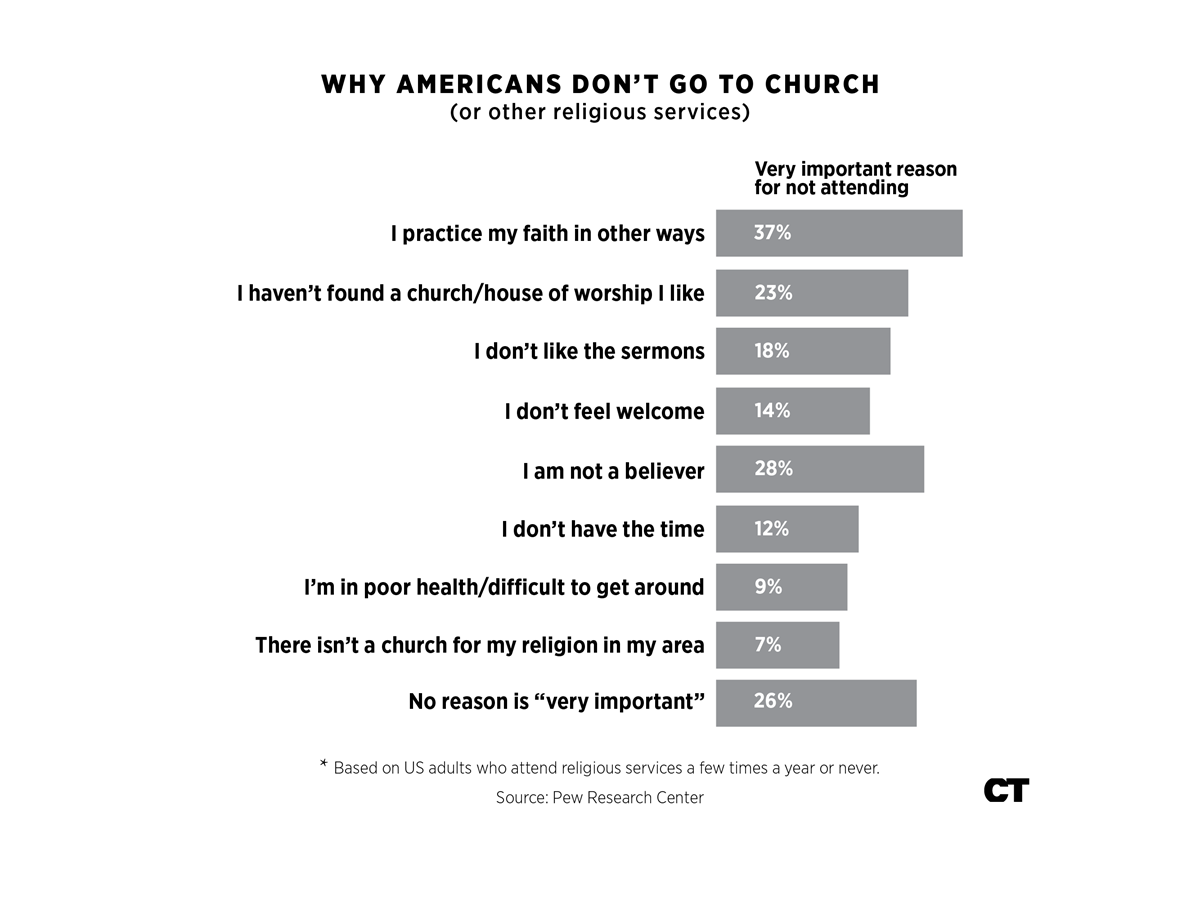 Overall, reasons of dislike (37%) or other methods of practice (37%) outnumbered nonbelief (28%), with logistical reasons (22%) close behind. Meanwhile, 1 in 4 non-attenders cited no reason as very important (26%).

Meanwhile, only half of religiously unaffiliated Americans, often called the “nones,” cite nonbelief as a very important reason they don’t attend. Many cite reasons of dislike or logistics. 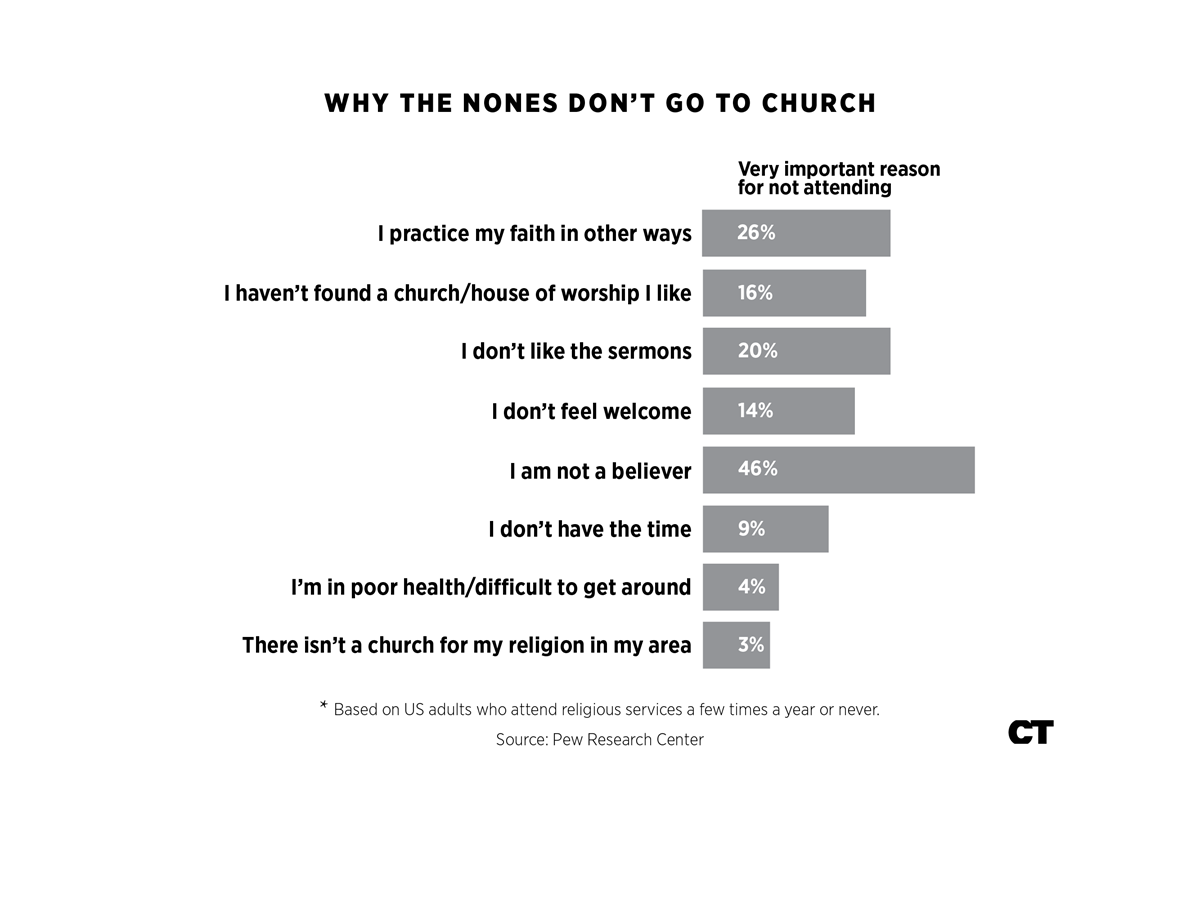 Pew asked regular attenders if they feel a sense of God’s presence, community with fellow believers, or connection to longstanding tradition. While majorities said they experience all three, women were more likely than men to often or always have such feelings.

And interestingly, millennials felt equally connected to history and community as older adults, but were “much less likely” to feel connected to God. “Roughly 6 in 10 adults under 30 often feel a sense of God’s presence at religious services, compared with 8 in 10 or more in older age groups,” noted Pew researchers.

Among regular attenders, 86 percent of evangelicals say they experience God’s presence during worship services always or often, as do 83 percent of black Protestants, 81 percent of all Christians, 80 percent of all Americans, and 78 percent of Catholics.

A recent Gallup survey found that the hottest thing at American churches is not the pastor or worship leader. LifeWay Research also recently studied why churchgoers stay or leave their congregations, and well as who invites others to church.

CT previously noted who exaggerates church attendance most and how children’s sports may be the main reason behind decline.

Here are the top reasons other demographics go to church or don’t go: 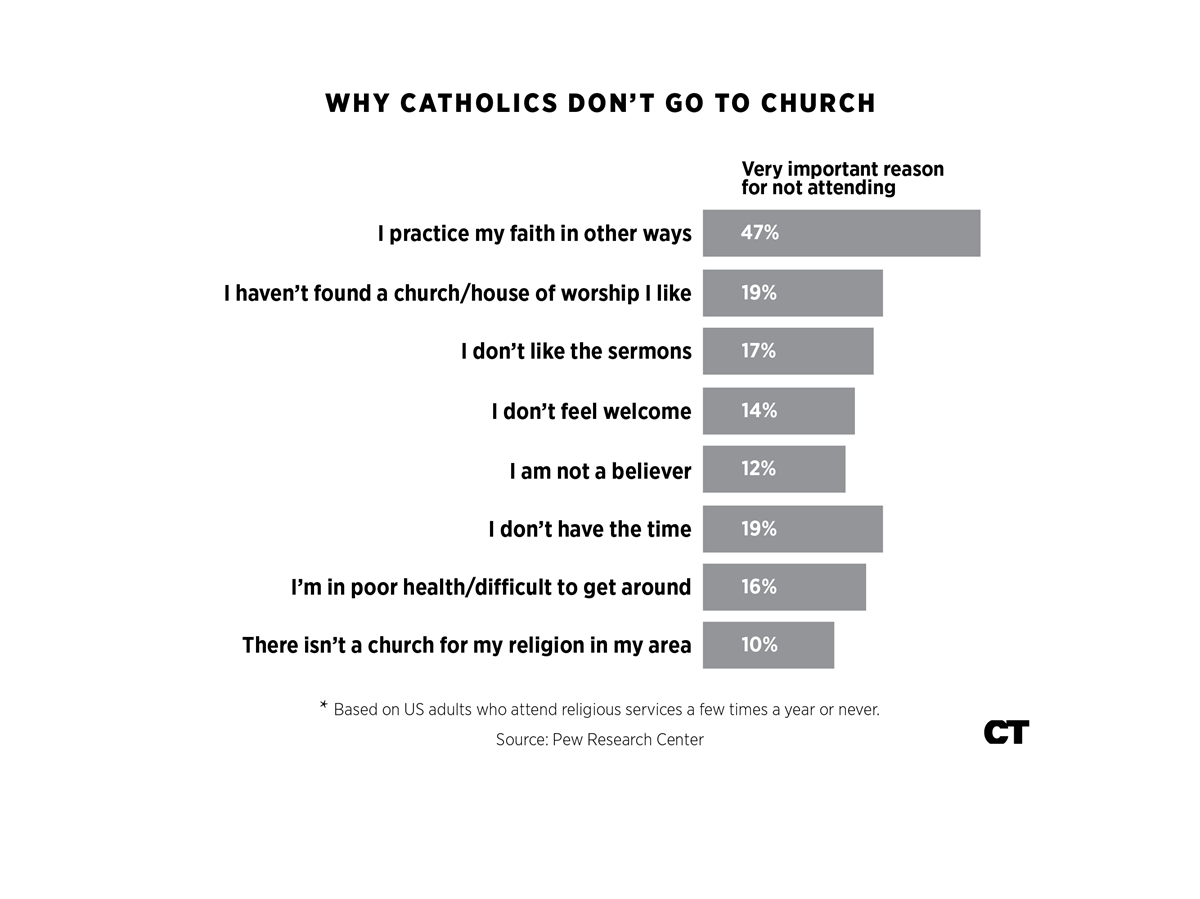 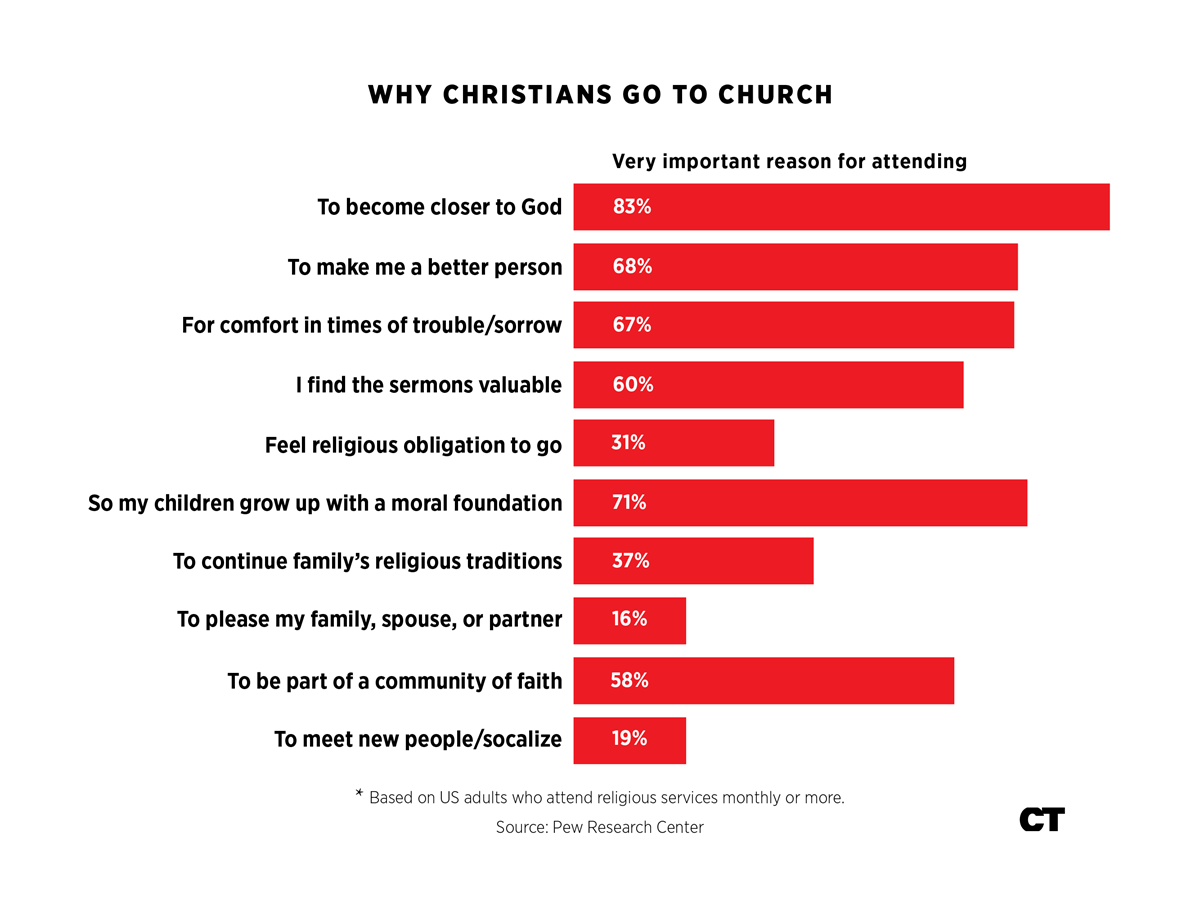 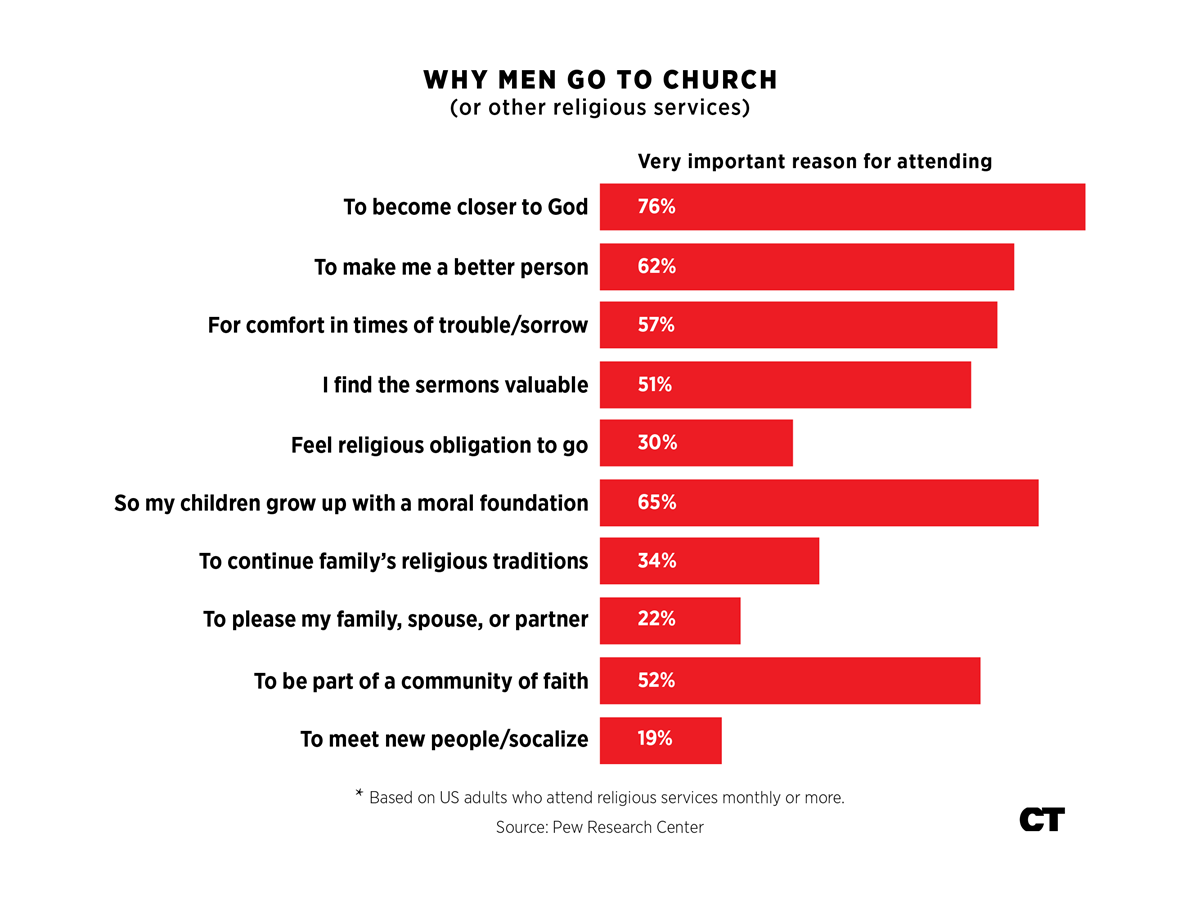 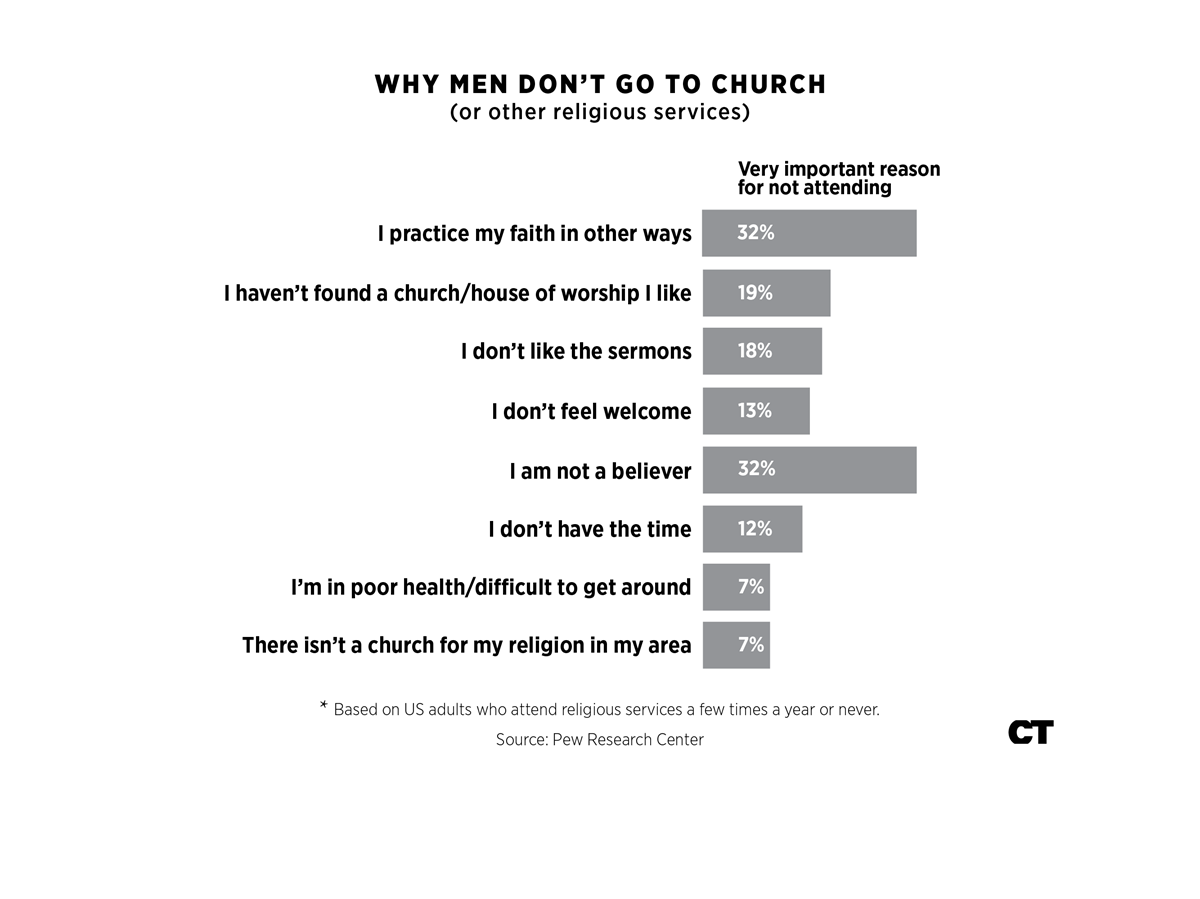 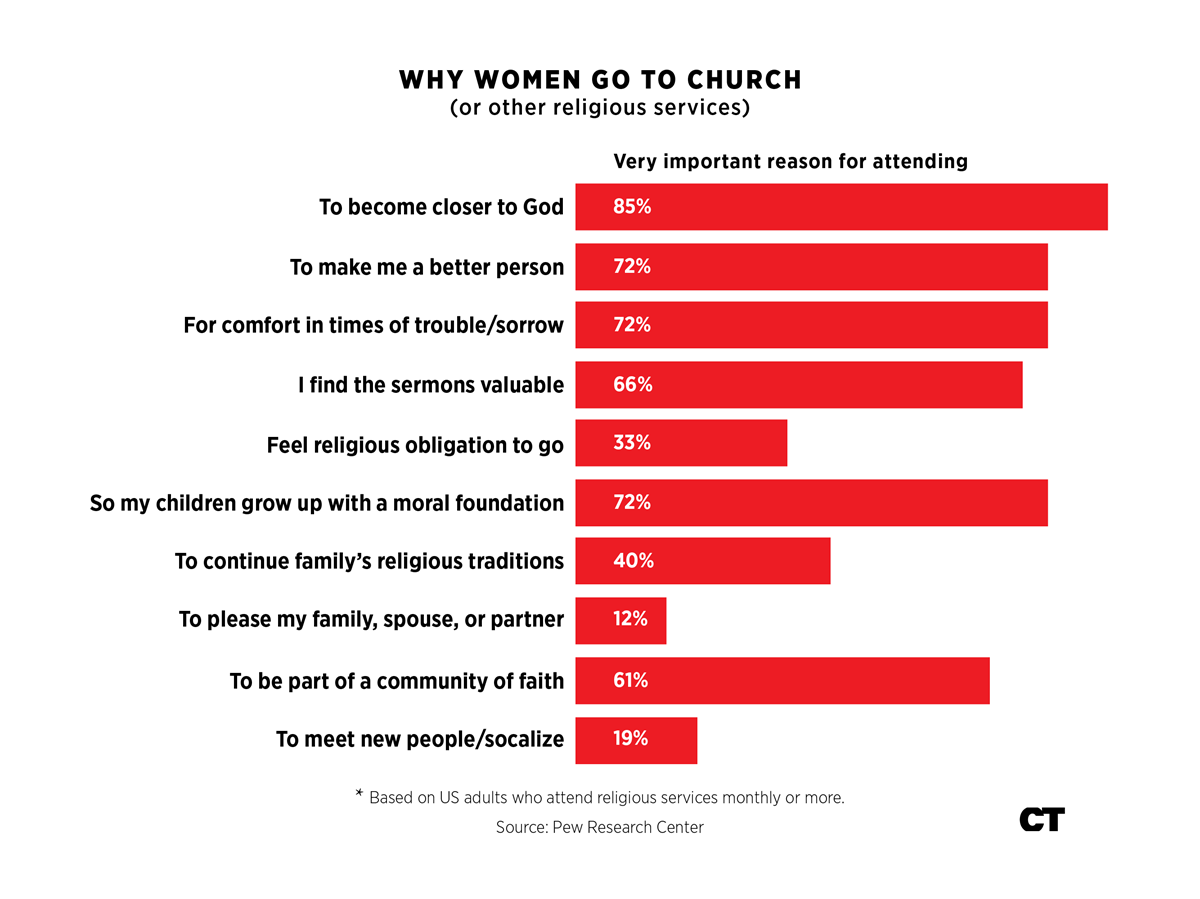 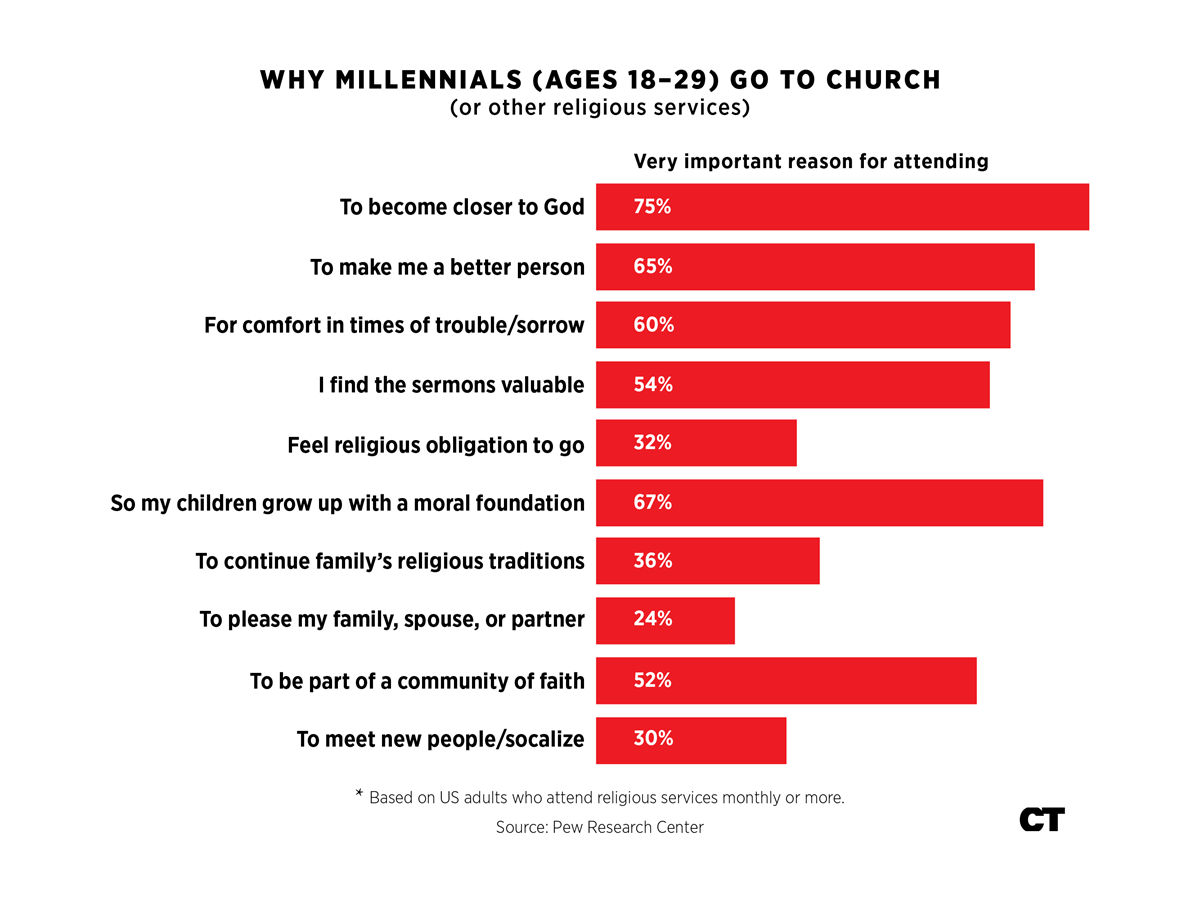 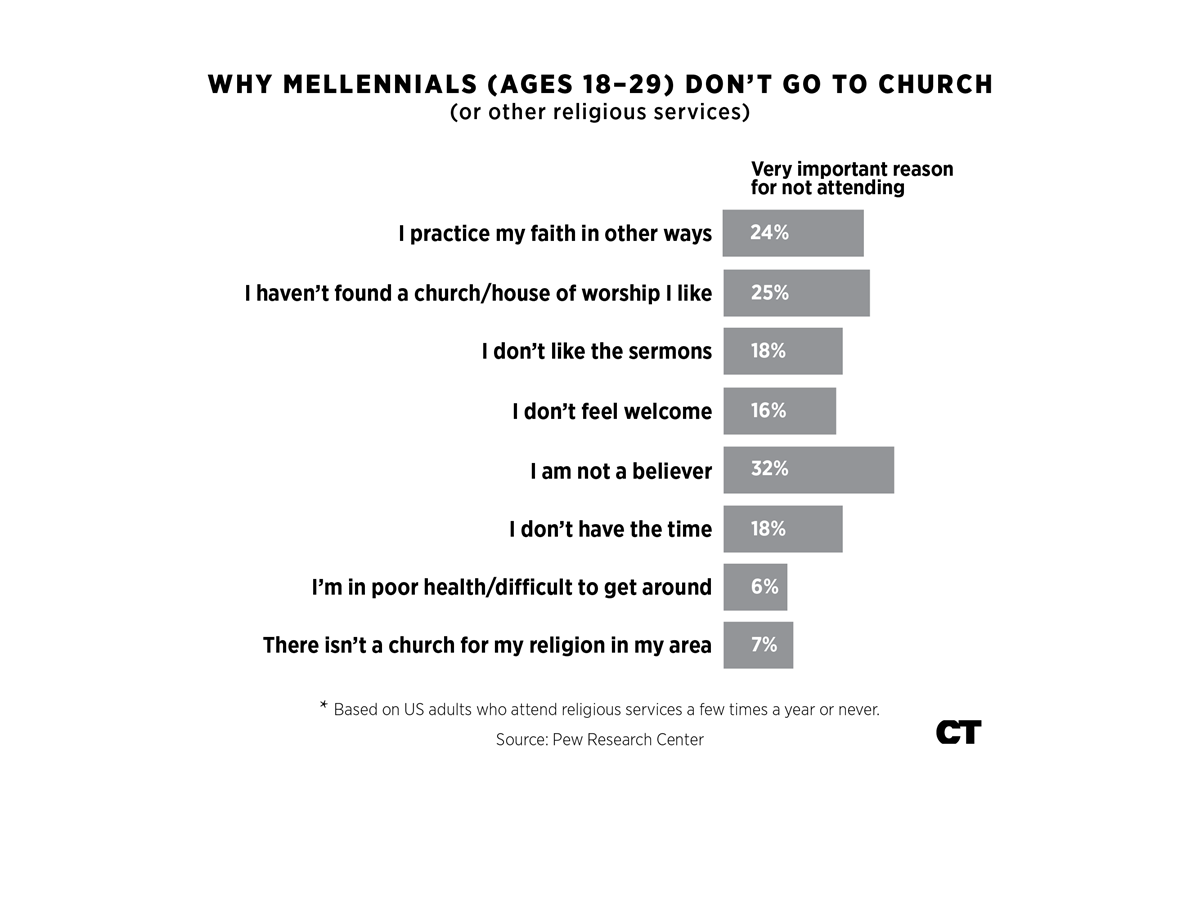 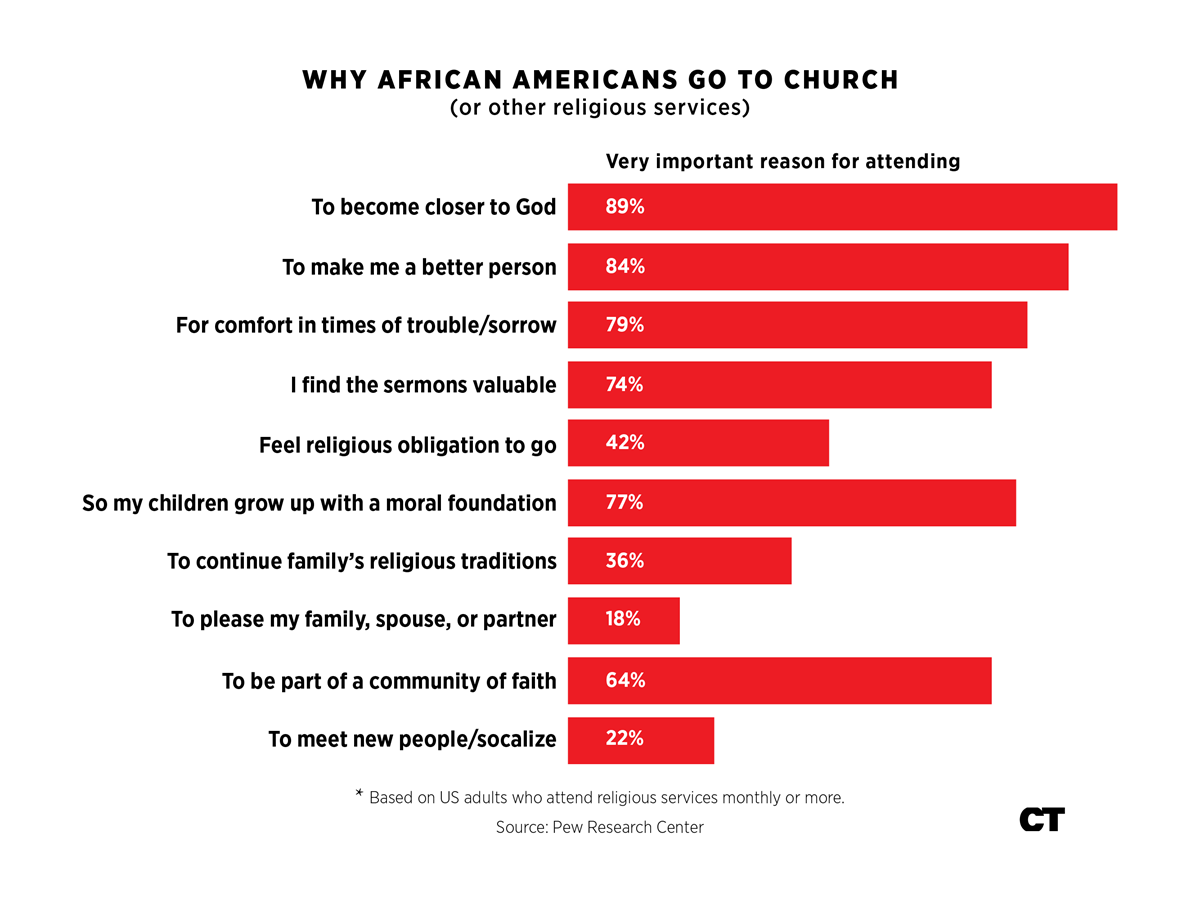 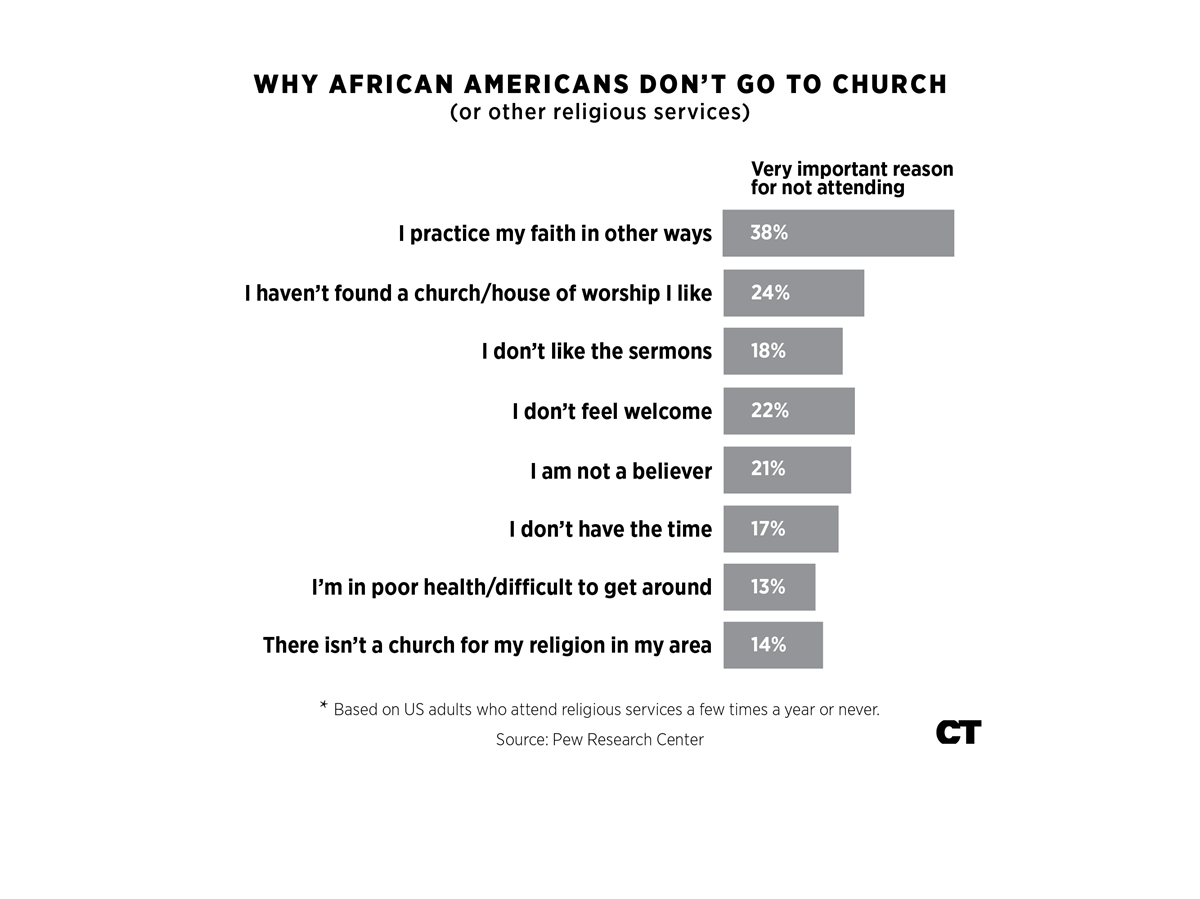 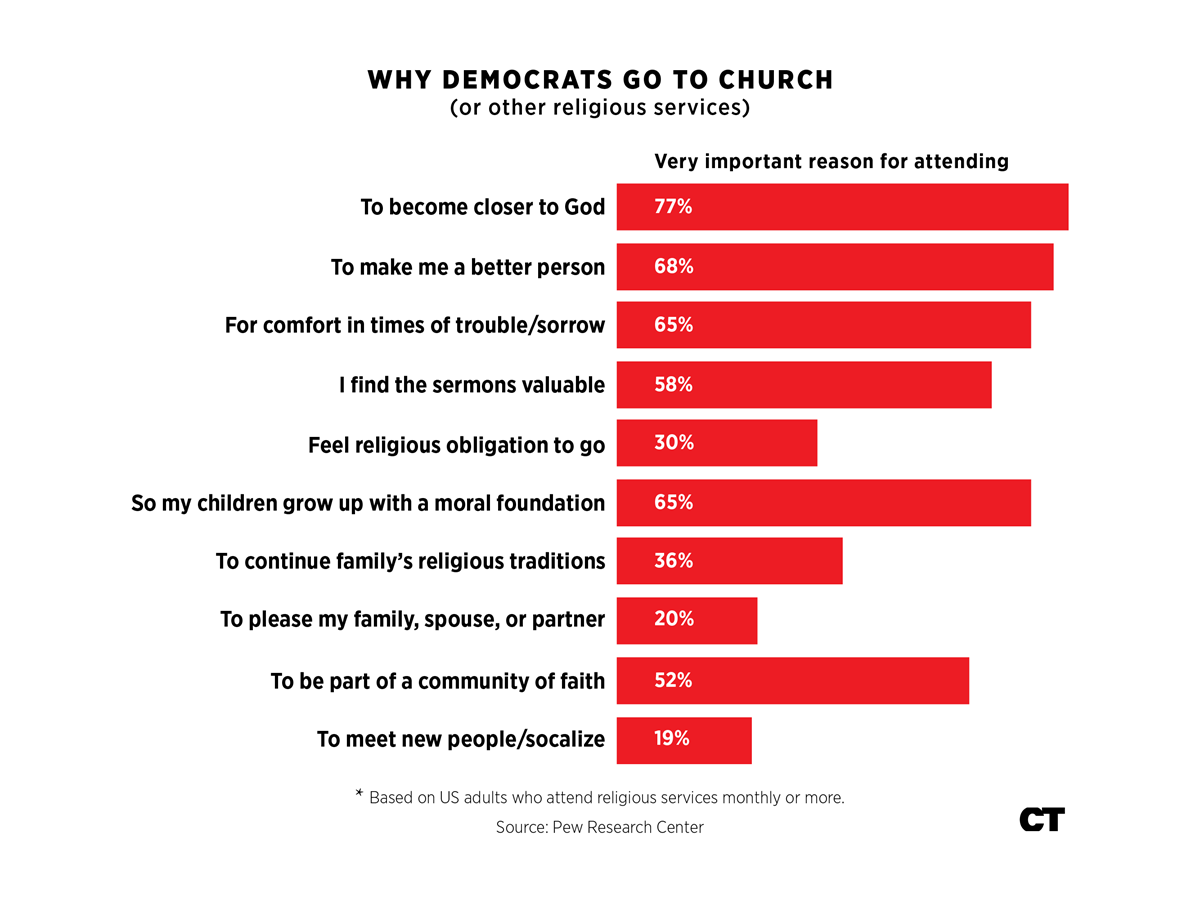 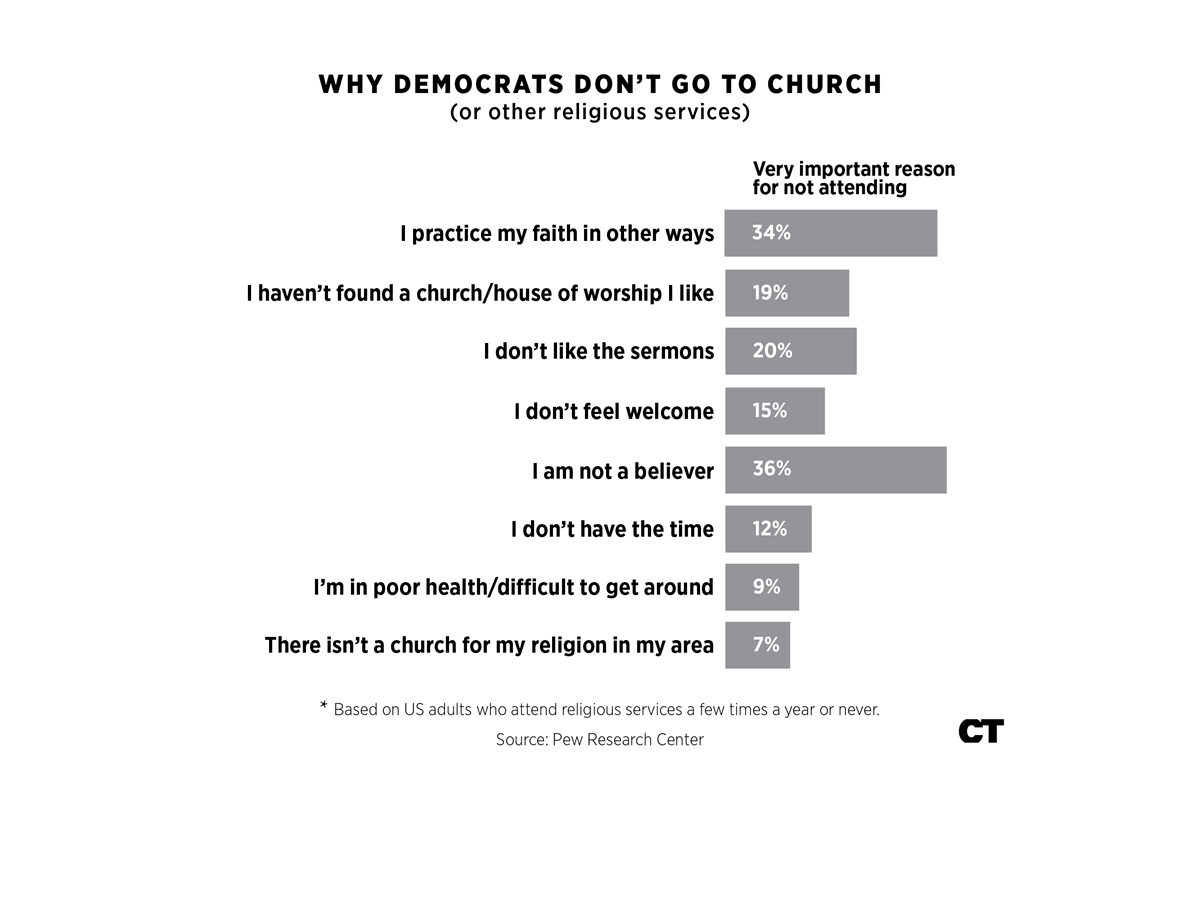 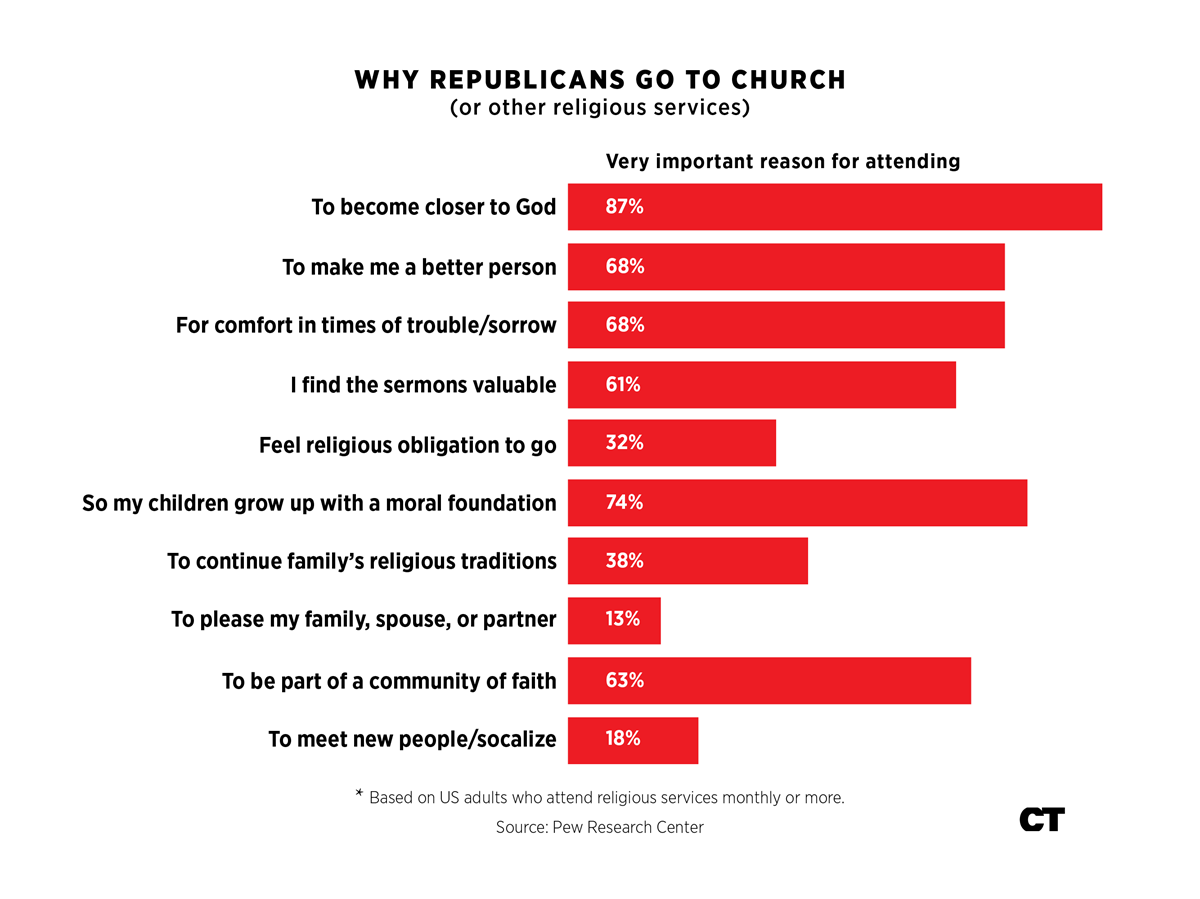 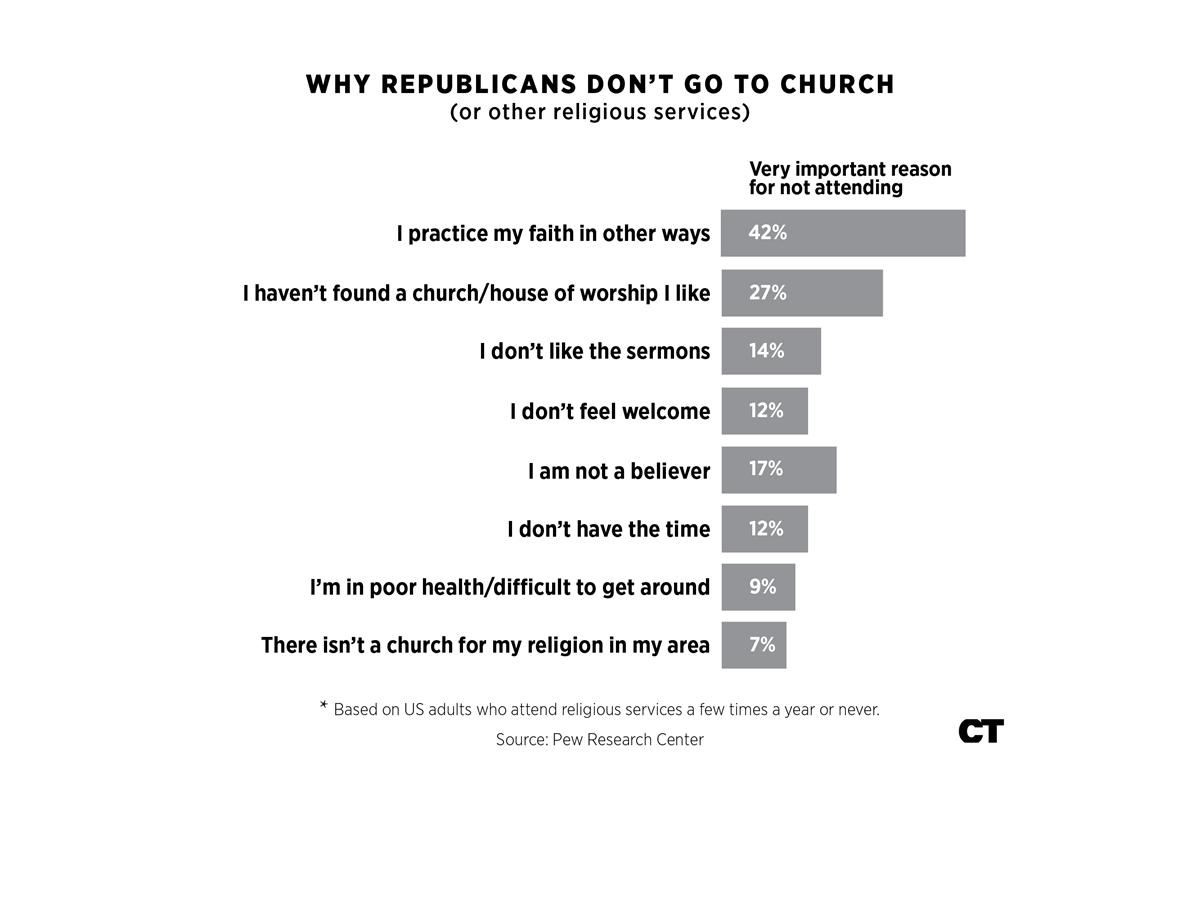