With students safely returned, the church continues to pray for peace.
Kate Shellnutt
November 15, 2018 8:00 AM 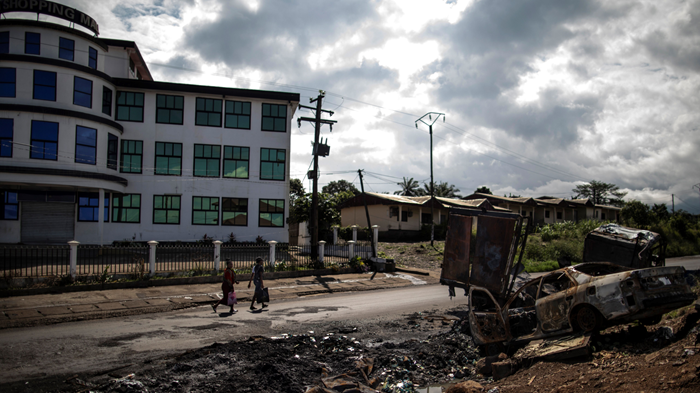 Kidnappers released this week the last of more than 80 hostages taken from a Presbyterian school in Cameroon amid an escalating crisis in the Central African country’s English-speaking regions.

Just over a week after being captured at gunpoint, the principal, dorm warden, and two remaining students were freed Monday, while the rest of the victims, students ages 11–17, were let go last week, Reuters reported.

The Presbyterian-run boarding school in the region’s capital, Bamenda, has been forced to shut down since the captors threatened further attacks.

The incident represents the latest of at least four school abductions over the past two months, and about a dozen over the past year, as unrest over disparities between Cameroon’s English-speaking North-West and South-West regions and the nation’s French-speaking majority turns increasingly violent. Another 11 boys had been taken from the same school the week before.

And the kidnappings, as heart-wrenching as they are, represent just a small portion of the violence that has left the Anglophone region on the brink of civil war.

An estimated 400 civilians have died in the dispute, including an American missionary caught in the crossfire last month, just weeks after moving to Cameroon. More than a quarter-million people have fled their homes and villages, and many who remain are desperate for security and resources.

Cameroon’s churches, whose cry for peace has intensified over the past few months, have suffered in the separatist conflict, with four church buildings taken over by military forces and at least 50 Christian-run primary schools, secondary schools, and hospitals affected, according to Gustav Ebai, information and communication secretary for the Council of Protestant Churches of Cameroon.

“We have failed God,” he said in an interview with CT. “There is no evil like the evil I have seen in my country.”

“Given what the Anglophone community is passing through at this moment, we cannot really celebrate; feasting and enjoying ourselves while many of God’s children are being killed, living in pains, frustrated and others living as internal and external refugees,” stated Fonki Samuel Forba, moderator of the Presbyterian Church in Cameroon (PCC).

He advised congregations in the PCC—the largest local English-speaking denomination, with over a million members—to keep observances low-key and to use the occasion to raise awareness about those impacted by the recent violence.

More than 100 PCC pastors are believed to have fled the two regions as conditions worsen; in Bamenda, some residents fear that even traveling or attending typical gatherings could put them at risk of attacks. Ebai told CT that in many villages, the pastors were the last to leave.

PCC leaders have helped coordinate counseling for displaced families who have moved in with friends or fellow church members in safer regions. Millions are in need of humanitarian aid as a result of the conflict. Those who are left in the Anglophone region tend to be the poorest and neediest—the ones without means to flee elsewhere.

“… [M]uch emphasis should be laid on raising Mission Work Fund to enable the Church continue to attend to our displaced pastors and brethren affected by the armed conflict that has brought sorrow and suffering upon many,” Forba stated. “As we keep on praying and trusting that soon the Lord would turn our mourning to rejoicing and the flourishing of life in absolute peace and justice, remain inspired.”

The escalating violence in the Anglophone regions coincided with a tense election held last month, which re-elected 85-year-old President Paul Biya for his seventh term in office; he has ruled since 1982.

Though Cameroon’s two languages and corresponding cultural differences date back to British and French colonial rule, the conflict has emerged more recently as English speakers in North-West and South-West began to protest against discrimination from the French majority in the national government about two years ago.

The Anglophones—who represent 3 million people and approximately a fifth of the nation’s population—defended their place in local schools and courts in particular. Their protests eventually spurred an intense separatist movement when Biya responded by sending an elite military unit to the area.

Because the education system has become a major point of contention between the two sides, the armed separatists have burned or taken over more than 100 schools in western Cameroon in the past year.

Many Cameroonians suspect an unfair election and worry that there will not be a peaceful resolution for the English-speaking regions under Biya, since the affected areas are also a political stronghold for his opposition.

“Before, during, and after the presidential elections that just ended in Cameroon, Christians, and many believers of other faiths, prayed for this country. They prayed like they never did before,” wrote Buma Kor Dickson, a Christian publisher based in Yaoundé.

“The fact is that Cameroonians on both sides prayed for change, but the answer is still to come. God is not done with Cameroon, yet!”

At Presbyterian Church Bastos, in the capital city of Yaoundé, Emmanuel Basam urged Christians to continue praying for peace, calling to mind the Presbyterian schools and hospitals threatened by attacks to the west.

For over a year, Basam has addressed the Anglophone-Francophone conflict in his preaching, including sermons on loving your enemies, seeking unity, and praying for God to heal the land.

The national Protestant council adopted Deuteronomy 19:10 as a theme verse earlier this year: “Do this so that innocent blood will not be shed in your land, which the Lord your God is giving you as your inheritance, and so that you will not be guilty of bloodshed” (NIV). Now, they have focused their prayers on restoration, based on 2 Corinthians 13:11: “Strive for full restoration, encourage one another, be of one mind, live in peace. And the God of love and peace will be with you” (NIV).

Ebai has urged churches to use the global coverage and attention around the recent kidnappings as an opportunity to double-down on their message, condemning the current violence and calling for peaceful discussion.

“We need to communicate it at all levels, at every church, every sermon, every Sunday,” he said. “If you are praying without action, how do you expect God to use you?”

Seeing the conflict as a humanitarian crisis, Christian denominational leaders have taken the initiative to promote dialogue between the government and the secessionists, Christian leaders told CT. Many of their own have fled the region for safer cities, or even left the country for neighboring Nigeria, as the threat of violence grew more severe.

Ebai, whose family is from South-West, has taken in 15 relatives and visits family in the region at least once a month. Four of his cousins, including two in the military, have died in the fighting.

Presbyterian, Episcopalian, and Catholic clergy in the majority-Christian nation have partnered with Muslim leaders to offer to work as mediators, but officials feared political motives behind their efforts, Catholic newspaper La Croix reported.

American missionary Charles Wesco numbers among the civilian victims. The Baptist pastor and father of eight was killed on October 30, less than two weeks after his family moved from Indiana to outside Bamenda.

“We deplore the death of the missionary,” Edward Njini, pastor of Nkwen Baptist Church in Bamenda, told Religion News Service. “It is unfortunate they fired the guns and he was killed. I don’t think he was a target.”

Wesco and a fellow missionary were driving into town when their vehicle was shot; both the separatists and the government forces blame the other side for the killing.

Family members and fellow missionaries honored Wesco at a memorial service in South Bend, Indiana on Monday. They “have been praying diligently for the man that took Charles' life,” said Randy King, a pastor who served for 30 years in Cameroon.

“But I pray as a missionary to Cameroon that I … might one day have the opportunity to meet Charles' killer to express our forgiveness to him and in love, seek to lead him to repentance and faith in Jesus Christ as his Lord and Savior that he might also receive God's forgiveness for what he did.”

Catholic media report that a Catholic seminarian, Gerard Anjiangwe, was also killed last month, and a priest in the South-West town of Bomaka was shot in July.

Meanwhile, Cameroon’s Far North region continues to suffer under the threat of Boko Haram terrorists. Christianity Today recently reported its November cover story from neighboring Nigeria on the relentless attacks the church there has faced from Boko Haram and militant Fulani herdsmen.

Subscribe to CT and get one year free
Tags:
AfricaInternationalKidnappingPoliticsViolence
Posted by:
Kate Shellnutt