Survey of US Protestant church leaders parses support for the President by church size, denomination, ethnicity, and age.
Aaron Earls - Facts & Trends|October 11, 2018 10:13 AM 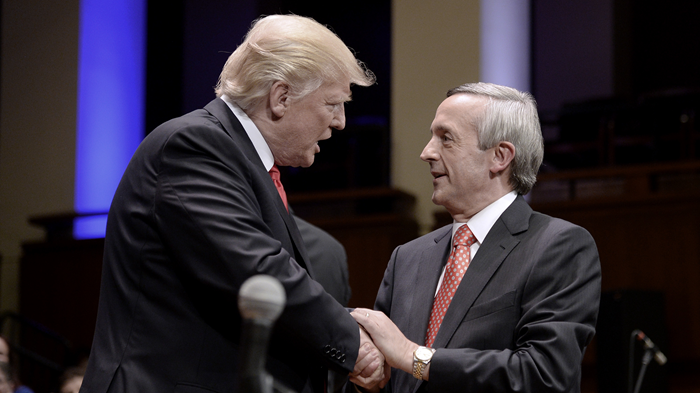 A slim majority of pastors say they approve of the job President Donald Trump has done in the White House, but many are unsure.

A new study from Nashville-based LifeWay Research of Protestant senior pastors found 51 percent approve of how Trump has handled the presidency, with 25 percent strongly approving.

“After almost two years of actions and statements from the White House, most pastors likely consider some positive and others negative,” said Scott McConnell, executive director of LifeWay Research.

“When asked to evaluate the president’s job performance with no neutral option, most pastors approve.”

Pastors were specifically prompted to evaluate the president’s job performance, said McConnell. There is no lack of data on President Trump, but many were still hesitant to give an opinion. 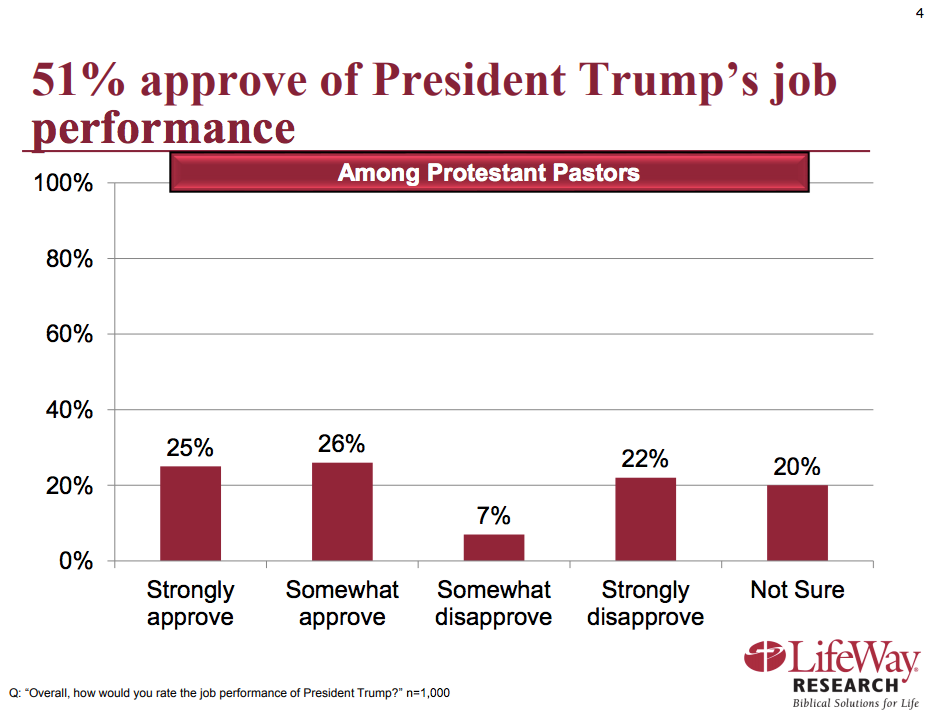 In the leadup to the 2010 midterm elections, a LifeWay Research survey found 30 percent of Protestant pastors approved of President Obama’s job performance. More than 6 in 10 (61%) disapproved, and only 9 percent said they were not sure.

“There is no lack of information on what President Trump is doing or how he is doing it,” said McConnell, “so the undecided posture appears to be an unwillingness to identify with either of the political sides that have emerged in American politics.”

The hesitancy of pastors to take sides where Trump is concerned stretches back to the presidential election.

Despite 52 percent of Protestant pastors identifying as a Republican and only 18 percent calling themselves a Democrat in a LifeWay Research survey prior to the November 2016 election, only 32 percent said they planned to vote for Trump. A full 40 percent said they were undecided, with 19 percent planning to vote for Hillary Clinton.

African American pastors are the least likely to approve of the president’s handling of the job. Only 4 percent approve of his performance, while 85 percent disapprove.

Outside of African Americans, pastors are much more split. Slightly more than half of white pastors (54%) approve, along with slightly less than half of pastors of other ethnicities (47%).

Younger pastors are the least likely age group to approve of the president’s performance. Four in 10 (41%) of those ages 18 to 44 say Trump has done a good job, while 56 percent of those ages 45 and older say likewise.

“They are less tied to traditional political identities and remain slow to express approval of President Trump.”

Pastors’ responses are also split across denominations. Pentecostals (86%) and Baptists (68%) are most likely to approve of the president’s performance.

Church of Christ pastors (55%) and Lutherans (41%) are more split, while few Presbyterian/Reformed (28%) and Methodists (25%) say they support the job President Trump has done.

Even in these denominational divides, the views of the president’s performance largely follow political leanings, according to McConnell.

Other findings in 2018 include:

“With the majority of Protestant pastors identifying as Republican, it is not surprising that a majority approve of President Trump in his first term,” said McConnell.

“Clearly, pastors’ political views factor in how they evaluate the president’s leadership and accomplishments in the first half of his term.”

The phone survey of 1,000 Protestant pastors was conducted Aug. 29-Sept. 11, 2018. The calling list was a stratified random sample, drawn from a list of all Protestant churches. Quotas were used for church size. Each interview was conducted with the senior pastor, minister or priest of the church called. Responses were weighted by region to more accurately reflect the population. The completed sample is 1,000 surveys. The sample provides 95 percent confidence that the sampling error does not exceed plus or minus 3.2 percent. Margins of error are higher in sub-groups.